How Political Opinions Change. Our political opinions and attitudes are an important part of who we are and how we construct our identities. 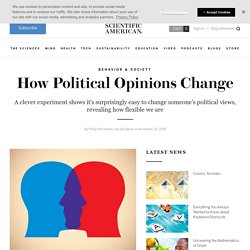 Hence, if I ask your opinion on health care, you will not only share it with me, but you will likely resist any of my attempts to persuade you of another point of view. Likewise, it would be odd for me to ask if you are sure that what you said actually was your opinion. If anything seems certain to us, it is our own attitudes. But what if this weren’t necessarily the case? In a recent experiment, we showed it is possible to trick people into changing their political views. We are also far more motivated to reason and argue to protect our own or our group’s views.

The trick, as strange as it may sound, is to make people believe the opposite opinion was their own to begin with. The experiment relies on a phenomenon known as choice blindness. These effects lasted up to a week later. Dynamic graph of #dh2010 @-messaging and retweeting. Spread of a tweet. Uk.businessinsider. 11877043_807576156007859_2128429791_n. Untitled. Centola-2010-Science.pdf.

Graphs in the world: Modeling systems as networks. Get notified when our free report, “Mapping Big Data: A Data Driven Market Report” is available for download. 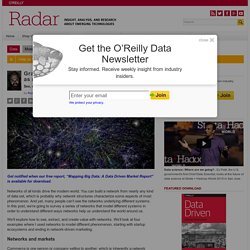 Networks of all kinds drive the modern world. You can build a network from nearly any kind of data set, which is probably why network structures characterize some aspects of most phenomenon. And yet, many people can’t see the networks underlying different systems. In this post, we’re going to survey a series of networks that model different systems in order to understand different ways networks help us understand the world around us.

We’ll explore how to see, extract, and create value with networks. Networks and markets Commerce is one person or company selling to another, which is inherently a network phenomenon. Strength of weak ties Mark Granoveter famously researched job hunting and discovered the Strength of Weak Ties. In Granoveter’s day, social network analysis was limited in that data collection usually involved a clipboard and good walking shoes. The Social-Network Illusion That Tricks Your Mind. One of the curious things about social networks is the way that some messages, pictures, or ideas can spread like wildfire while others that seem just as catchy or interesting barely register at all. 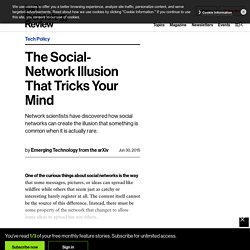 The content itself cannot be the source of this difference. Instead, there must be some property of the network that changes to allow some ideas to spread but not others. Today, we get an insight into why this happens thanks to the work of Kristina Lerman and pals at the University of Southern California. These people have discovered an extraordinary illusion associated with social networks which can play tricks on the mind and explain everything from why some ideas become popular quickly to how risky or antisocial behavior can spread so easily. Network scientists have known about the paradoxical nature of social networks for some time. This comes about because the distribution of friends on social networks follows a power law. Lightning strikes vs. the sun: Twitter's advertising challenge in one chart. More than three-quarters of marketers do email marketing exclusively with marketing automation platforms. 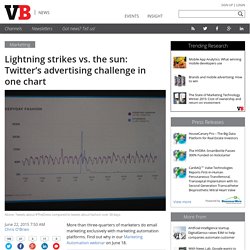 Find out why in our Marketing Automation webinar on June 18. CANNES, France — Talk about awkward. Chris Moody, Twitter’s vice president of data strategy, had to deliver a major keynote at Cannes Lions today just a week after the company announced that chief executive Dick Costolo would step down. Presenting Twitter’s pitch to one of the world’s largest gathering of advertising and marketing peeps amid questions about the company’s growth and leadership is, well, maybe less than ideal timing. During his hourlong talk, Moody dove into Twitter’s wealth of data to highlight a common dilemma the company faces. Moody spent about 10 minutes strangling a metaphor about the energy created by lightning strikes (fast and sharp, exciting, but dissipates quickly) compared to the sun (far greater, but steady and predictable). Or, as tracked in the chart above, the viral explosion about #TheDress. Bloomberg Business - Business, Financial & Economic News, Stock Quotes. This Is How Fast America Changes Its Mind By Alex Tribou and Keith CollinsUpdated: June 26, 2015 Eleven years after Massachusetts became the first state to allow same-sex couples to marry, the Supreme Court has now extended that right nationwide. 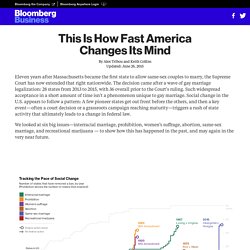 The decision came after a wave of gay marriage legalization: 28 states from 2013 to 2015, with 36 overall prior to the Court's ruling. Such widespread acceptance in a short amount of time isn't a phenomenon unique to gay marriage. Social change in the U.S. appears to follow a pattern: A few pioneer states get out front before the others, and then a key event—often a court decision or a grassroots campaign reaching maturity—triggers a rush of state activity that ultimately leads to a change in federal law. We looked at six big issues—interracial marriage, prohibition, women’s suffrage, abortion, same-sex marriage, and recreational marijuana — to show how this has happened in the past, and may again in the very near future.

Related:  Then & Now Photography   -  Understanding Politics   -  Social Networks   -  US of A and those Wascally Terrorists   -  Education   -  Enterprise