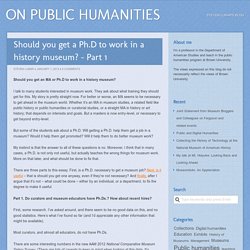 I talk to many students interested in museum work. They ask about what training they should get for this. My story is pretty straight now. For better or worse, an MA seems to be necessary to get ahead in the museum world. Whether it’s an MA in museum studies, a related field like public history or public humanities or curatorial studies, or a straight MA in history or art history; that depends on interests and goals. National Report 2014. This year’s edition of 'Heritage Counts’ provides an overview of research on the value and impact of heritage. 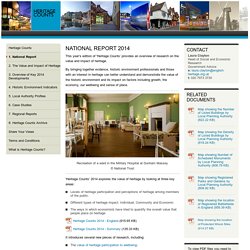 By bringing together evidence, historic environment professionals and those with an interest in heritage can better understand and demonstrate the value of the historic environment and its impact on factors including growth, the economy, our wellbeing and sense of place. 'Heritage Counts’ 2014 explores the value of heritage by looking at three key areas: Kansas City museum considering cultural district. Matching Museums to a New Reality. My journey hasn’t included obvious destinations in a museum pilgrimage.

Typical choices might have been New York, London, more of Europe. Instead of traveling to major museum centers, I’ve gone off the grid for short periods. Onto oceans, into deserts, up mountains. Museum Jobs That Didn't Exist in 2003. (& what that says about the evolution of our field.) 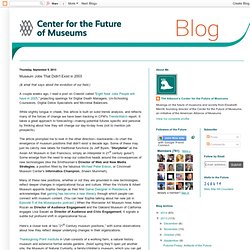 A couple weeks ago, I read a post on Coexist called “Eight New Jobs People will have in 2025,” projecting openings for Digital Death Managers, Un-Schooling Counselors, Digital Detox Specialists and Microbial Balancers. While slightly tongue in cheek, this article is built on solid trends analysis, and reflects many of the forces of change we have been tracking in CFM’s TrendsWatch report. It takes a great approach to forecasting—making potential futures specific and personal by thinking about how they will change our day-to-day lives (not to mention job prospects).

The article prompted me to look in the other direction—backwards—to chart the emergence of museum positions that didn't exist a decade ago. Some of these may just be catchy new labels for traditional functions (is Jeff Byers, “Storyteller” at the Asian Art Museum in San Francisco, simply an interpreter in 21st century guise?) Museum Jobs That Didn't Exist in 2003. Museums Change Lives.

Forming an Open Authority in Cultural Heritage. The following post is by Lori Byrd Phillips, who served as the 2012 US Cultural Partnerships Coordinator for the Wikimedia Foundation and is now Digital Content Coordinator at The Children’s Museum of Indianapolis. 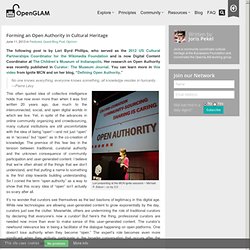 Her research on Open Authority was recently published in Curator: The Museum Journal. You can learn more in this video from Ignite MCN and on her blog, “Defining Open Authority.” No one knows everything, everyone knows something, all knowledge resides in humanity. 21st Century Museum Issues Lecture Series: Reinventing the Museum. Games for Change is the leading global advocate for supporting and making games for social impact. Are museums a man or woman's world?

Women are still working in a man's world. 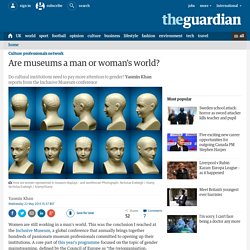 This was the conclusion I reached at the Inclusive Museum, a global conference that annually brings together hundreds of passionate museum professionals committed to opening up their institutions. A core part of this year's programme focused on the topic of gender mainstreaming, defined by the Council of Europe as "the (re)organisation, improvement, development and evaluation of policy processes, so that a gender equality perspective is incorporated in all policies at all levels and at all stages".

Gender mainstreaming emerged as a strategy towards global equity by 1995, after it was addressed at the UN's fourth world conference of the Beijing Platform for Action. CultureBlock can help businesses find creative neighborhoods - Philadelphia Business Journal. A new cultural mapping tool that we wrote about last week has officially launched. 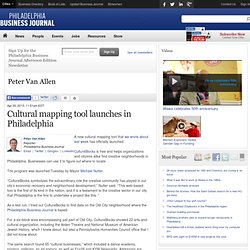 CultureBlocks is free and helps organizations and citizens alike find creative neighborhoods in Philadelphia. Businesses can use it to figure out where to locate. The program was launched Tuesday by Mayor Michael Nutter. “CultureBlocks symbolizes the extraordinary role the creative community has played in our city’s economic recovery and neighborhood development,” Nutter said. Lisa Mazzola. Museums and Motivation: Intrinsic Motivations. “The desire to learn for its own sake appears to be a natural motive built into the central nervous system.” 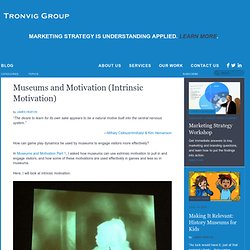 —Mihaly Csikszentmihalyi & Kim Hemanson How can game play dynamics be used by museums to engage visitors more effectively? Www.aam-us.org/docs/research/acme-2013-final.pdf?utm_source=MagnetMail&utm_medium=email&utm_term=rcnnolly&utm_content=Weekly%3A 04/23/13&utm_campaign=Weekly%3A April 23. What the public thinks. Process stories. In politics, the idea of a process story – the inside story about how policy is made – doesn’t always sit well.

It’s “too inside baseball.” The focus on what is happening behind the scenes, on the machinations that impact policy outcomes is often perceived to be a distraction from the political outcomes themselves. The Mindful Museum: Challenges and opportunities in the 21st Century. Museum 3 - what will the museum of the future be like? Museums, Cubed. Last month, Nate Rudy shared his hope that museums would pop up more often in storefronts to help revitalize small towns. 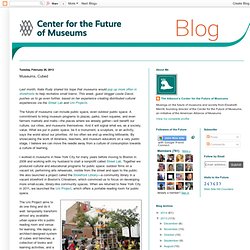 This week, guest blogger Leslie Davol, pushes us to go even further, based on her experience creating distributed cultural experiences via the Street Lab and Uni Projects. The future of museums can include public space, even outdoor public space. A commitment to bring museum programs to plazas, parks, town squares, and even farmers markets and malls—the places where we already gather—will benefit our culture, our cities, and museums themselves. And it will signal what we, as a society, value. What we put in public space, be it a monument, a sculpture, or an activity, says the world about our priorities. I worked in museums in New York City for many years before moving to Boston in 2006 and working with my husband to start a nonprofit called Street Lab. What employers seek in public history graduates (Part 3): Skill sets beyond collections management. This is the third post in a series to discuss the genesis of the idea for the “What Employers Seek in Public History Graduates” session at the 2013 National Council on Public History meeting in Ottawa.

Session panelists will continue to share their thoughts on the topic in entries in the coming weeks. Before the rapid proliferation of museum studies and public history programs began in the 1960s and 1970s, almost all museum professionals held degrees in traditional academic disciplines related to the content areas of their museums. People who worked in historic sites and history museums usually had degrees in history. Typically, museum-specific skills and knowledge in areas such as collections care, exhibit development, and interpretation were learned “on-the-job.” Where Should Museums Look for the Workforce of the Future? That leaves me wondering, who would museums hire if they looked beyond the traditional pipeline? Especially as there is such widespread dissatisfaction with the traditional pipeline (e.g., museum studies programs, arts administration).

The Consumer Expenditure Survey collects information on the spending habits of American consumers, including data on their expenditures, income, the number of households making particular expenditures and other household characteristics, using both a Quarterly Interview Survey and the Diary Survey of approximately 7,000 households each year. The survey is conducted by the U.S. The first thing we looked at was participation – what percent of all households spent money each year on entertainment during a trip. Sca.jiscinvolve.org/wp/files/2013/01/Sustaining-our-digital-future-FINAL-31.pdf. Museums and open educatione-Literate. As we rethink the factory-style model of education in our schools (students learning in a group at a standardized pace) empowered by the powerful technologies now at our disposal, we will naturally also think of ways to better support the educational missions of museums. Some recent discussions The thoughts below were inspired by a number of recent blog posts: Nina Simon’s Khan Academy and Online Free Choice LearningGretchen Jennings’s Museum Educators – What’s Next and a second post on the topicErin Branham’s First Steps to Embracing Digital Literacy for Musem Educators.

Cultural Conversation by Judith H. Dobrzynski. Museums and the challenges of the 21st century: paper by Dr. Klaus Müller « Future of Museums. The below arguments all circle around one assumption: museums will not continue to exist in their present 150-year old form for the foreseeable future, at least not as relevant institutions. As many other businesses, they face a rapidly changing culture, through which their mission will be redefined and will take on new meanings.

They are challenged in their core definition as showcases of material culture through the most innovative force in contemporary culture, the Web. The unprecedented access to billions of replicas of cultural artifacts will lead to significant changes in how we look at, consume, or produce cultural artifacts. Virtuality, both in its narrower technological and its broader cultural meaning, will prove itself as a fundamental category of museum practice.

Narration – as a form of reflection, interpretation and representation of culture – will become the fluid core of what museums are about. Mobile museums (on a truck): History and science delivered. There is no better way to reach underserved audiences than to drive directly to them. Mobile museums, in converted RVs or semi-trailers, are delivering history, science and art experiences. Here are two great examples. History. Www.valcasey.com/ichim/assets/casey_ichim.pdf. Technology in museums turns visitors into curators and creators. Museums and galleries should be using new technologies and media to teach, engage and immerse visitors in the art they are viewing, says Local Projects founder Jake Barton. Thousands show up at the Grand Rapids Art Museum to see ArtPrize 2012 winner 'Elephants'

The Museum of the Future. Will US museums succeed in reinventing themselves? Museums USA. Diversify or Die: Why the Art World Needs to Keep Up With Our Changing Society. President Obama’s reelection last week has put a blazing spotlight on the “emerging majority” thesis, thrusting it into the center of political discussion. Museums of the future: providing the personal, collaborating with the crowd. The museum of the future might offer a highly-personalised experience. Intercultural Dialogue and Social Cohesion in Museums - MeLa Research Project. Local Holocaust Museums Grow Amid Worries About Future. Towards a New Mainstream.

Related:  Serious Games   -  Videogames   -  Games for Change is the leading global advocate for supporting and making games for social impact.   -  Museum 3 - what will the museum of the future be like?   -  The Museum of the Future   -  Education   -  Enterprise