Lu fintech cios venture capitalists 102015. Banking in a Digital World. Bitcoin vs. Banking: An Infographic. There's no denying that Bitcoin is changing the way we think about the financial market and investors are finally getting on board. 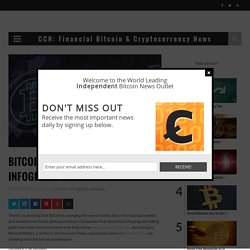 Companies that specialize in buying and selling gold have made announcements that they will be expanding into Bitcoin. According to Richard Waters, a writer in the Financial Times, reported A-Listers in Silicon Valley are climbing onto the bitcoin bandwagon. [divider]CCN[/divider] Perhaps even more notable is what Hikmet Ersek, the CEO of Western Union, had to say during an interview with Bloomberg. Mr. 10 Bitcoin Infographics To Help Make You A CryptoCurrency Samurai - IMGRIND. Hey Grinders! 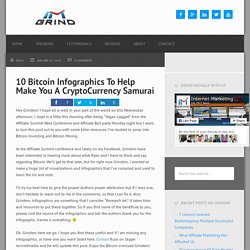 I hope all is well in your part of the world on this Wednesday afternoon. I slept in a little this morning after being “Vegas-Lagged” from the Affiliate Summit West Conference and Affiliate Ball party Monday night but I want to turn this post out to you with some killer resources I’ve studied to jump into Bitcoin Investing and Bitcoin Mining. At the Affiliate Summit conference and lately on my Facebook, Grinders have been interested in hearing more about what Ryan and I have to think and say regarding Bitcoin. Auriga_atm_futuretrends_2015_final. Diebold, Incorporated (DBD) - Financial and Strategic SWOT Analysis Review. 1 of 4 Diebold, Incorporated (DBD) - Financial and Strategic SWOT Analysis Review provides you an in-depth strategic SWOT analysis of the company’s businesses and operations. 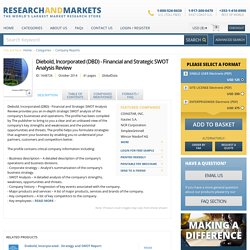 The profile has been compiled by The publisher to bring to you a clear and an unbiased view of the company’s key strengths and weaknesses and the potential opportunities and threats. The profile helps you formulate strategies that augment your business by enabling you to understand your partners, customers and competitors better. Building the Customer-Centric Bank of the Future. The banking industry has been slow to adapt to changing expectations and new ways of serving customers. 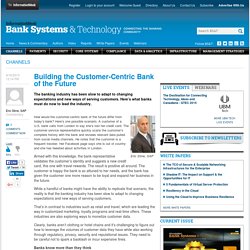 Here’s what banks must do now to lead the industry. Eric Stine, SAP How would the customer-centric bank of the future differ from today’s bank? Here’s one possible scenario. A customer of a U.S. bank calls from London to say she’s lost her credit card. Armed with this knowledge, the bank representative validates the customer’s identity and suggests a new credit card, this one with travel rewards. Capturing Southeast Asia’s financial-system opportunity. The countries that comprise the Association of Southeast Asian Nations (ASEAN) have more in common than mere geography. 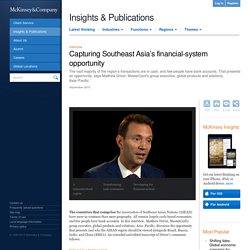 All remain largely cash-based economies, and few people have bank accounts. In this interview, Matthew Driver, MasterCard’s group executive, global products and solutions, Asia–Pacific, discusses the opportunity that presents and why the ASEAN region should be viewed alongside Brazil, Russia, India, and China (BRICs). An extended and edited transcript of Driver’s comments follows. Interview transcript A misunderstood region. Experian micro analytics at DuckDuckGo. Capitalizing on Asia's digital-banking boom. Since 2011, adoption of digital-banking services has soared across Asia. 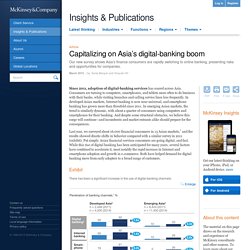 Consumers are turning to computers, smartphones, and tablets more often to do business with their banks, while visiting branches and calling service lines less frequently. In developed Asian markets, Internet banking is now near universal, and smartphone banking has grown more than threefold since 2011. In emerging Asian markets, the trend is similarly dynamic, with about a quarter of consumers using computers and smartphones for their banking. And despite some structural obstacles, we believe this surge will continue—and incumbents and market entrants alike should prepare for the consequences.

Last year, we surveyed about 16,000 financial consumers in 13 Asian markets, and the results showed drastic shifts in behavior compared with a similar survey in 2011 (exhibit). Experian MicroAnalytics, the innovator in alternative data analytics. DI_Innovation_Whitepaper. The Transformation of NCR. Financial Services articles and insights. Rewiring the Enterprise for Digital Innovation : The Case of DBS Bank. This pricing is for PDFs that are purchased and downloaded from our website and printed copies that ship from our warehouse to your requested shipping location. 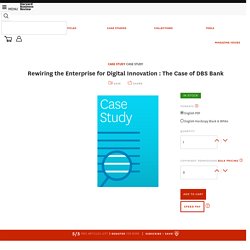 20150130-McKinsey-Strategic-choices-for-banks-in-the-digital-age.pdf. How to prepare for Asia’s digital-banking boom. As has been evident for the past decade, Asian consumers have flocked to digital technologies, with adoption rates for some devices, especially mobile phones, outstripping Western rates. 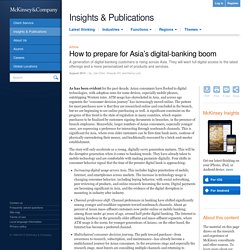 ATM usage has skyrocketed in Asia, and across age segments the “consumer decision journey” has increasingly moved online. The pattern for most purchases now is that they are researched online and concluded in the branch, but we are beginning to see online purchasing as well. A significant constraint on the progress of this trend is the state of regulation in many countries, which require purchases to be finalized by customers signing documents in branches, in the presence of branch employees.

Meanwhile, larger numbers of Asian consumers, especially younger ones, are expressing a preference for interacting through nonbranch channels. The story will only accelerate as a young, digitally savvy generation matures. Increasing digital usage across Asia. Future_of_Asian_Banking_Volume_2.pdf. Quintessence - Bitcoin: What you didn't know but always wanted to ask. Please click here to know more about: A short history of money. 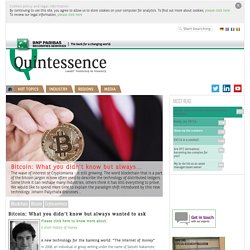 Finextra blog: Something New Happening in Transaction Banking? I am happy to share the initial findings of my research on how transaction banking is transforming. 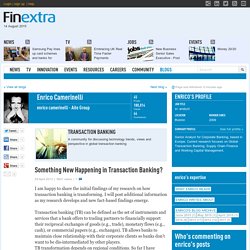 I will post additional information as my research develops and new fact-based findings emerge. Transaction banking (TB) can be defined as the set of instruments and services that a bank offers to trading partners to financially support their reciprocal exchanges of goods (e.g., trade), monetary flows (e.g., cash), or commercial papers (e.g., exchanges). TB allows banks to maintain close relationship with their corporate clients so banks don’t want to be dis-intermediated by other players. TB transformation depends on regional conditions. So far I have explored Western Europe, North America, and some countries in APAC. Groot potentieel voor kleine bedrijven. De opmars van internet heeft ondernemers een extra financieringskanaal gegeven. Automated_teller_machines_atms_market_research_report.pdf.

1126265133155_Automated_teller_machines.pdf. Check 21 Act. The Check Clearing for the 21st Century Act (or Check 21 Act) is a United States federal law, Pub.L. 108–100, that was enacted on October 28, 2003 by the 108th U.S. Congress. The Check 21 Act took effect one year later on October 28, 2004. The law allows the recipient of the original paper check to create a digital version of the original check, a process known as check truncation, into an electronic format called a "substitute check", thereby eliminating the need for further handling of the physical document. Consumers are most likely to see the effects of this act when they notice that certain checks (or image of) are no longer being returned to them with their monthly statement, even though other checks are still being returned. Another side effect of the law is that it is now legal for anyone to use a computer scanner or mobile phone to capture images of checks and deposit them electronically, a process known as remote deposit.

Truncation[edit] The Future of ATMs. iOS POS System de Detailhandel. Volatility, uncertainty, complexity and ambiguity. Concept in leadership studies VUCA is an acronym – first used in 1987, drawing on the leadership theories of Warren Bennis and Burt Nanus – to describe or to reflect on the volatility, uncertainty, complexity and ambiguity of general conditions and situations;[1][2] The U.S.

Army War College introduced the concept of VUCA to describe the more volatile, uncertain, complex and ambiguous multilateral world perceived as resulting from the end of the Cold War. More frequent use and discussion of the term "VUCA" began from 2002 and derives from this acronym from military education.[3][need quotation to verify] It has subsequently taken root in emerging ideas in strategic leadership that apply in a wide range of organizations, from for-profit corporations[4][need quotation to verify] to education[5][6] Meaning[edit] These elements present the context in which organizations view their current and future state.

Themes[edit] Social Categorization[edit] Digital wallet. A digital wallet refers to an electronic device that allows an individual to make electronic commerce transactions. This can include purchasing items on-line with a computer or using a smartphone to purchase something at a store. Increasingly, digital wallets are being made not just for basic financial transactions but to also authenticate the holder's credentials. For example, a digital-wallet could potentially verify the age of the buyer to the store while purchasing alcohol. It is useful to approach the term "digital wallet" not as a singular technology but as three major parts: the system (the electronic infrastructure) and the application (the software that operates on top) and the device (the individual portion).[1] An individual’s bank account can also be linked to the digital wallet.

Technology[edit] The key point to take from digital wallets is that they're composed of both digital wallet devices and digital wallet systems. M-Pesa. M-Pesa (M for mobile, pesa is Swahili for money) is a mobile-phone based money transfer and microfinancing service, launched in 2007 by Vodafone for Safaricom and Vodacom, the largest mobile network operators in Kenya and Tanzania.[1] It has since expanded to Afghanistan, South Africa, India and in 2014 to Eastern Europe. Pay. How Will Banks Respond if Apple Becomes Mobile Payments Player. According to several reports, Apple is gearing up to roll out a new payments system for physical goods and services beyond the walls of it’s Apple stores.

If true, Apple would leverage the iTunes payments system, credit card data already on file for more than a half million consumers, and recent patents to become a big player overnight. How will banks or credit unions respond? Online Banking With Automatic Budgeting & Savings. Disruptive Innovation In Banking. 'Disruptive Innovation' describes a process by which a product or service takes root initially at the bottom of a market and then relentlessly moves up market, eventually displacing established competitors. Trends_in_retail_banking_channels_meeting_changing_client_preferences.pdf. 20150130-McKinsey-Strategic-choices-for-banks-in-the-digital-age.pdf. Innovation in Banking Payments, Mobile Payments, Card Payments - managing risk - keynote for G2 Web Services.

China’s Wealth Management Products (WMPs) Lure Investors With Higher Yields [CHARTS] Makin’ It Rain: Alibaba Gets Into Wealth Management Game - China Real Time Report. Investment Default Shows Risks in China Bank Sector. Alibaba launches new wealth management product Zhaocai Bao｜WCT. McKinsey '15: Strategic choices for banks in the digital age. If the last epoch in retail banking was defined by a boom-to-bust expansion of consumer credit, the current one will be defined by digital. This will include rapid innovation in payments and the broader transformation in systems enabled by digital technologies.