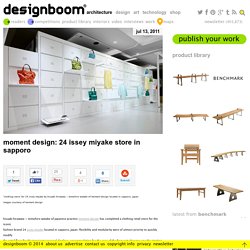 What is RAW for the Oceans? People's Climate March: thousands demand action around the world - as it happened. THE 10-YEAR HOODIE: Built for Life, Backed for a Decade! by Jake Bronstein. Can Currency Campaigns : recycled cans. In an eco-conscious marketing move, McDonald's Stockholm is letting you pay for food with recycled cans. 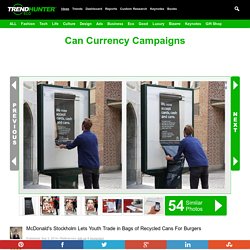 The interactive initiative was conceived and designed by advertising agency DDB Stockholm to encourage young people to clean up the area around them and care for the environment. By collecting discarded cans customers can fill up a bag with a specified amount to get free burgers. For ten recycled cans you can get a cheeseburger or hamburger, while 40 cans get you a Big Mac. The recycling bags are attached to billboards strategically placed near areas young people are likely to congregate near. According to the Swedish fast food chain, which now accepts "cards, cash and cans," the campaign appeals to cash-poor youth to help deal with summer-specific garbage after festivals and outdoor parks become popular. The Sustainable Wheel. In The Sustainable Wheel trend report we offer some critical thought around the definition of sustainable design. 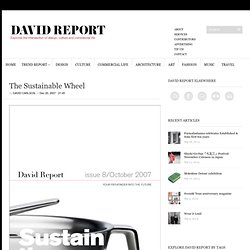 Quite often sustainability is only refered to as an environmental issue. Maybe we have to adapt a more holistic mindset and extend sustainability beyond the mere material. Nature’s living wisdom trend report from David Report by Kristina Dryza. Hiut Denim - Hiut Denim. Main features - Nissan Leaf Acenta, Tekna and Visia - electric cars.

The Next Black - A film about the Future of Clothing. Timberland open a new design concept in their Regent Street store. Can fashion help save the world? Forget what Netflix’s says; green might just be the new black. 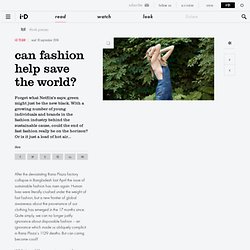 With a growing number of young individuals and brands in the fashion industry behind the sustainable cause, could the end of fast fashion really be on the horizon? Or is it just a load of hot air… Ifixit. 18 Green Artists Who Are Making Climate Change And Conservation A Priority. "The quality of place, the reaction to immediate contact with earth and growing things that have a fugal relationship with mountains and sky, is essential to the integrity of our existence on this planet," the famous American photographer Ansel Adams wrote in his autobiography. 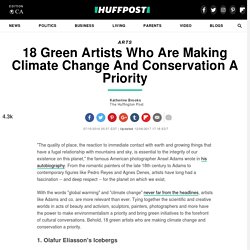 From the romantic painters of the late 18th century to Adams to contemporary figures like Pedro Reyes and Agnes Denes, artists have long had a fascination -- and deep respect -- for the planet on which we exist. With the words "global warming" and "climate change" never far from the headlines, artists like Adams and co. are more relevant than ever. S Trend Briefing covering "10 Crucial Consumer Trends for 2013" “Not just transparent, but naked and proud ;-)” So what’s next for the mega-trend of transparency? 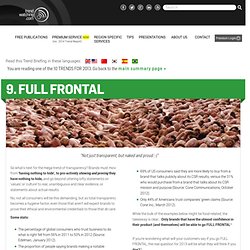 Brands must move from ‘having nothing to hide’, to pro-actively showing and proving they have nothing to hide, and go beyond uttering lofty statements on 'values' or 'culture' to real, unambiguous and clear evidence, or statements about actual results. No, not all consumers will be this demanding, but as total transparency becomes a hygiene factor, even those that aren’t will expect brands to prove their ethical and environmental credentials to those that do care. Some stats: The percentage of global consumers who trust business to do what is right fell from 56% in 2011 to 53% in 2012 (Source: Edelman, January 2012). 69% of US consumers said they are more likely to buy from a brand that talks publicly about its CSR results, versus the 31% who would purchase from a brand that talks about its CSR mission and purpose (Source: Cone Communications, October 2012). 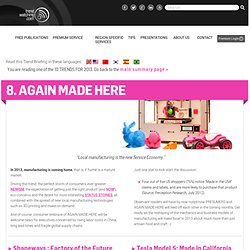 In 2013, manufacturing is coming home, that is, if ‘home’ is a mature market. Driving this trend: the perfect storm of consumers’ ever-greater NEWISM, the expectation of getting just the right product (and NOW!) Libertyunited.com. Nudie Jeans – The Naked Truth About Denim. S Trend Briefing covering "7 Consumer Trends To Run With In 2014" Growing numbers of consumers can no longer escape an awareness of the damage done by their consumption: to the planet, society, or themselves. 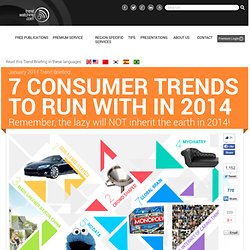 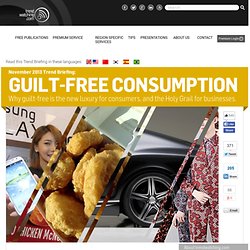 Garden Bridge. AboutThe GardenBridge London’s Garden Bridge will be a stunning new public garden and pedestrian crossing, spanning the River Thames, linking the South Bank to Temple station and beyond. 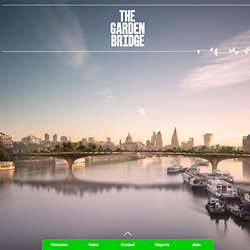 Designed by Heatherwick Studio and inspired by actress and campaigner, Joanna Lumley, the Bridge will provide a vital new route between north and south London and feature plants, trees, woodland and meandering walkways to be used and enjoyed by all. Led by The Garden Bridge Trust, its ground breaking design will integrate a new kind of public space into the fabric of the city, adding to London’s rich and diverse horticultural heritage.

Trends and Drivers - Corporate Social Responsibility. There is emerging evidence that effectively implemented, CSR can have significant impact in motivating, developing and retaining staff. Novo Nordisk, a high-value CSR pharmaceutical company in Denmark, for example, after launching their Values in Action program, which aligns their business objectives with sustainable development principles, saw a 5% drop in staff turnover, while Sears found a 20% reduction in staff turnover since implementing their CSR program. (Skinner, 2002, p.1). A landmark international CSR study of human resource practitioners conducted by the Society for Human Resource Management (SHRM) in 2006, reveals that CSR practices are seen as important to employee morale (50%), loyalty (41%), retention (29%), recruitment of top employees (25%) and productivity (12%).