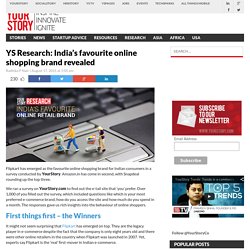 Amazon.in has come in second, with Snapdeal rounding up the top three. We ran a survey on YourStory.com to find out the e-tail site that ‘you’ prefer. Over 1,000 of you filled out the survey, which included questions like which is your most preferred e-commerce brand, how do you access the site and how much do you spend in a month. Indian Smartphone User Persona: 169 Mins Per Day Usage; Candy Crush, Flipkart, Gaana Emerge As Top Apps. As of now, there are 160 million users of smartphones in India, out of which 63% are under the age of 25. 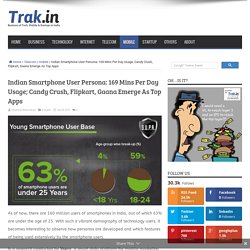 With such a vibrant demography of technology users, it becomes interesting to observe how personas are developed and which features of being used extensively by the smartphone users. In a research conducted by Vserv, a smart data platform for mobile marketing and ecommerce, 6 major personas of Indian smartphone users were revealed. These are: Indian Startup Funding And Investment Chart [2015] 10 Ways Everyone Should Approach Cybersecurity. Indian startups raised $3.5B funding in the first half of 2015. Angel and venture capital funding in India has hit its highest ever mark. 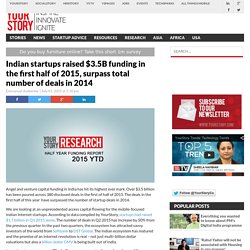 Over $3.5 billion has been poured across 380 disclosed deals in the first of half of 2015. The deals in the first half of this year have surpassed the number of startup deals in 2014. We are looking at an unprecedented access capital flowing for the mobile-focused Indian Internet startups. According to data compiled by YourStory, startups had raised $1.7 billion in Q1 2015 alone. The number of deals in Q2 2015 has increase by 50% from the previous quarter.

Sanat Rao from iSpirt says, “The India consumer sector is coming of age with more than 300 million internet users, and 15-20 million of them transacting online. 2015 is on track to be one of the hottest years for VC funding in the e-commerce/consumer internet space.” Rutvik Doshi, Director at Inventus Capital, shared with us his perspective how the first half of 2015 has been unprecedented on several accounts with several firsts, and records being broken. Share. 10 Stats You Should Know About E-Commerce in the Middle East. THE PAYMENTS INDUSTRY EXPLAINED: The Trends Creating New Winners And Losers In The Card-Processing Ecosystem. The payments industry had a huge year in 2014 and it's showing no sign of slowing down. 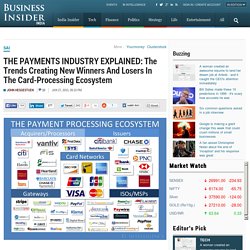 On the one hand tech giants like Amazon and Apple released new products that affirmed their long-term payments ambitions (Apple Pay and Amazon Local Register). On the other hand startups such as Stripe and ShopKeep continued to carve out market share, challenging older players like PayPal and VeriFone. Understanding this complex and rapidly evolving space can be challenging. In a new explainer, BI Intelligence offers a high-level look at the payments industry - how it functions, who the key players are, and the trends shaping the industry.

We start by explaining payment-card processing, since the majority of consumer payments and transaction volume flow through this system. Purchase The Full Report » [YS Research] Here are the top investors of 2015 who funded startups in India. Investors focused on Indian startups have been a busy lot this year. 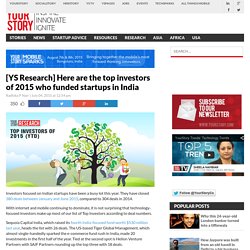 They have closed 380 deals between January and June 2015, compared to 304 deals in 2014. With internet and mobile continuing to dominate, it is not surprising that technology-focused investors make up most of our list of Top Investors according to deal numbers. Sequoia Capital India, which raised its fourth India-focused fund worth $530 million last year, heads the list with 26 deals. On-demand apps are riding a huge wave of investments - CNET. If you follow the money, it'll lead you to the world of on-demand apps. 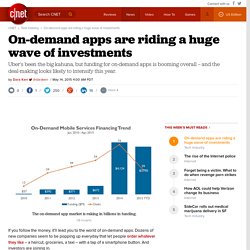 Dozens of new companies seem to be popping up everyday that let people order whatever they like -- a haircut, groceries, a taxi -- with a tap of a smartphone button. And investors are joining in. Venture funding for the on-demand industry jumped to 79 deals in 2014, totaling $4.12 billion, according to a new report by data analyst firm CB Insights. That's up significantly from 13 investments in 2010, worth a combined $57 million at the time. Overall, the industry has taken in $9.4 billion since 2010, with deals growing more than 513 percent in just the last year alone. And what of this year? "When we look at industries like digital health and bitcoin, those are growing," said CB Insights analyst Matthew Wong. The venture world already knows what many of us are just starting to notice -- that on-demand apps are exploding in usage.

"Year over year, the growth is well over 200 percent," Wong said. The Coming Food Bubble. Editor’s note: Robyn Metcalfe is a food historian at the University of Texas at Austin and the Director of The Food Lab at UT, a catalyst for scientific and cultural exploration, experimentation and innovation in the food system. 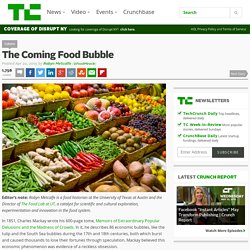 In 1851, Charles Mackay wrote his 600-page tome, Memoirs of Extraordinary Popular Delusions and the Madness of Crowds. In it, he describes 86 economic bubbles, like the tulip and the South Sea bubbles during the 17th and 18th centuries, both which burst and caused thousands to lose their fortunes through speculation. Mackay believed this economic phenomenon was evidence of a reckless obsession. We’re seeing some of that same recklessness creeping into the food industry, as we rush to embrace a new surge of food-related startups. A bubble is coming. Michael Lippold, CEO of FreshRealm, a startup that offers a cloud-based system for distributing food, shares a growing concern. Startup Data Trends.