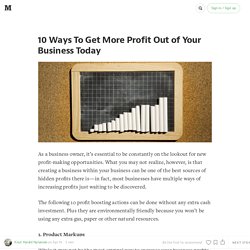 What you may not realize, however, is that creating a business within your business can be one of the best sources of hidden profits there is — in fact, most businesses have multiple ways of increasing profits just waiting to be discovered. The following 10 profit boosting actions can be done without any extra cash investment. Plus they are environmentally friendly because you won’t be using any extra gas, paper or other natural resources. 1. While it may not be the most original way to increase your business profits, product mark-ups can be quite advantageous. 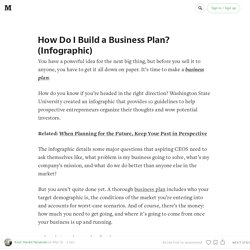 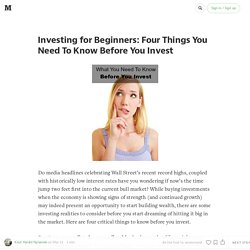 While buying investments when the economy is showing signs of strength (and continued growth) may indeed present an opportunity to start building wealth, there are some investing realities to consider before you start dreaming of hitting it big in the market. Here are four critical things to know before you invest. Don’t try to predict the unpredictable. In the words of financial expert and Kiplinger columnist Steven Goldberg, “virtually every simple method for timing the stock market is hogwash.” Stick to proven strategies. Top 5 digital technology market investments. Top 5 digital technology market investments 1. 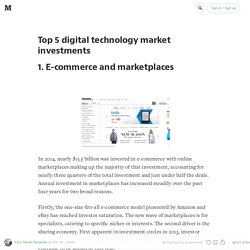 E-commerce and marketplaces In 2014, nearly $15.5 billion was invested in e-commerce with online marketplaces making up the majority of that investment, accounting for nearly three quarters of the total investment and just under half the deals. Annual investment in marketplaces has increased steadily over the past four years for two broad reasons. Firstly, the one-size-fits-all e-commerce model pioneered by Amazon and eBay has reached investor saturation. 2. 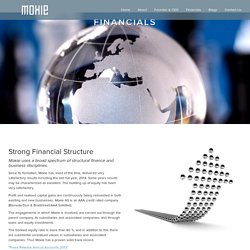 Since its formation, Moxie has, most of the time, delivered very satisfactory results including the last full year, 2014. Some years results may be characterized as excellent. The building up of equity has been very satisfactory. The Comment Group and the business of hacking. Norway's Sovereign Wealth Fund Ramps Up Investment Plans. Crowdfunding Expands To Local Real Estate Investments. Photo: Gretchen Frazee Mainstreet executives meet with potential investors during a pitch meeting in Bloomington. 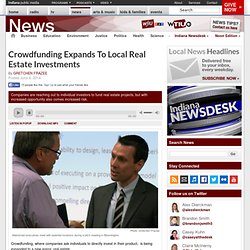 Crowdfunding, where companies ask individuals to directly invest in their product, is being expanded to a new arena: real estate. Innovating the Future of Business. In my previous article (The Value of Collaboration in Business), I wrote about Collaboration, one of the themes featured in the Economist Intelligence Unit’s Foresight 2020 report. 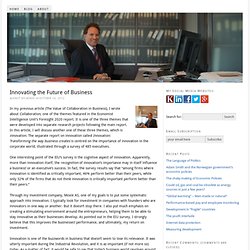 It is one of the three themes that were developed into separate research projects following the main report. 9 Life Lessons for Every Entrepreneur. Gordon Dean was an American lawyer and prosecutor whose distinguished career was fairly typical for Washington types. 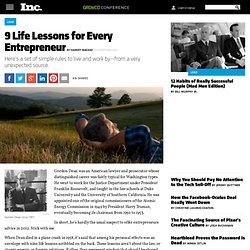 He went to work for the Justice Department under President Franklin Roosevelt, and taught in the law schools at Duke University and the University of Southern California. The Value of Collaboration in Business. “The future belongs to those who collaborate”, so begins the Economist Intelligence Unit’s (EIU’s) report called Collaboration: Transforming the way business works. 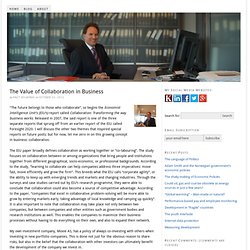 Released in 2007, the said report is one of the three separate reports that sprung off from an earlier report of the EIU called Foresight 2020. I will discuss the other two themes that inspired special reports on future posts; but for now, let me zero in on this growing concept in business: collaboration. The EIU paper broadly defines collaboration as working together or “co-labouring”.

The study focuses on collaboration between or among organizations that bring people and institutions together from different geographical, socio-economic, or professional backgrounds. What Business Leaders Can Learn From the Boom of Genealogy. Just recently, Bloomberg Businessweek placed genealogy website Ancestry.com on the limelight because of its ability to dominate the online genealogy industry. 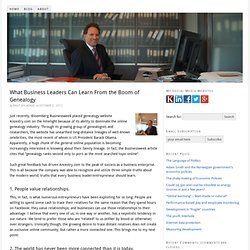 Through its growing group of genealogists and researchers, the website has unearthed long-distance linkages of well-known celebrities, the most recent of whom is US President Barack Obama. Apparently, a huge chunk of the general online population is becoming increasingly interested in knowing about their family lineage. Competition for businesses. Some people would argue that competition is the lifeblood of business. In a recent blog entry for the Harvard Business Review, author David Shields talks about A More Productive Way to Think About Opponents. Organising your organisation. Indonesia’s national emblem is called Garuda Pancasila. It pictures the mythical bird Garuda with a shield on its chest and gripping a claw with its legs.

The scroll reads: Bhinneka Tunggal Ika, meaning “Unity in diversity”. Interestingly, the current official motto of the European Union is “United in diversity” and previously it was “Unity in diversity”. Social mobility and inequality. Why is it that, despite the supposed economic breakthrough brought about by globalisation, most people still find it a challenge to move up the social ladder? Economists’ (rather obvious) answer?

Unequal societies. Numerous studies have previously explored this link between social mobility and inequality, but an economist named Gregory Clark from University of California, Davis uses an interesting method to do research on this theme: studying surnames. The main idea is this: there are a few surnames that can be identified as aristocratic or upper-class for a previous generation, and by looking at how the same surnames are presently distributed among social classes insight can be provided as to how “mobile” a particular society has been throughout several generations. Business Lessons from Chess. Some people say that chess is the game of kings, and the king of games.

This regal allusion to chess is probably due to the fact that the literal aim of the game is to protect a “king”. Chess is often linked to business management because the two share a lot of elements, such as strategy and competition. And there is, of course the ever-relevant figurative importance of “making the right moves”. Nevertheless, there are numerous lessons that business leaders can learn from the universe of chess. These lessons come in two levels: the practical and the metaphorical. Improving productivity. “When you’re running as fast as you can, what you sacrifice is attention to detail, and time to step back, reflect on the big picture, and truly think strategically and long-term.”

(Tony Schwartz on The Productivity Myth, 2010). Having read articles and listened to talks recently about productivity, I find a steadily rising trend of trying to disprove the efficiency of multitasking. What may be the reason for this? The core of management. Let’s talk about management. I know management has been the topic of most of my blog entries; and a huge community of bloggers and journalists have written much about it as well; but have you ever stopped to ask what management really is about?