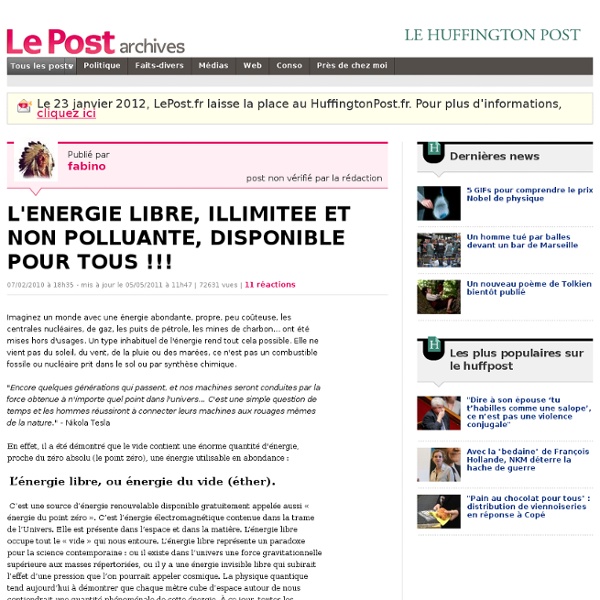 Why Nikola Tesla was the greatest geek who ever lived Additional notes from the author: If you want to learn more about Tesla, I highly recommend reading Tesla: Man Out of Time Also, this Badass of the week by Ben Thompson is what originally inspired me to write a comic about Tesla. Ben's also got a book out which is packed full of awesome. There's an old movie from the 80s on Netflix Instant Queue right now about Tesla: The Secret of Nikola Tesla.

Wind Turbine This post is not about Embedded Systems. But it is about a DIY project of mine. Old PC Fan to Wind Turbine. first phase The preparation of the building area started with the search of a geological fault with non-pulsating (permanent) flow of the Earth’s energy. In the process of the search, we found in the region of the pyramid building, an ancient ‘”heathen temple”, which was not less than 700 years old. The center of the “heathen temple” in ancient times was marked with a stone circle with “arrows” radiating from it. The “arrows” were made of rows of stones, put on the ground, which looked like wheel spokes.

Diagrams by Walter Russell Periodic System by Russell (1) Periodic System by Russell (2) Symbol of love extended from rest to motion Symbol of Power The Radial Universe God’s Projection Mirrors of Action 6 Apps You Don't Want To Miss It can be tough to keep up with all the new apps released each week. But you’re in luck: We take care of a lot of that for you, creating a roundup each weekend of some of our own highlights from the week. This week we found an app that lets you instantly get the opinion of a group of people on everything — from what shirt you should wear out tonight to what you should have for dinner, and another that will help get expert advice on any problems you might have, such as a broken computer or clogged toilet. A new app for good Samaritans rewards you for volunteering in your community, and an update to a popular app helps everyone find deals and friends located around them. If you love to take pictures, another new app helps turn Instagram into a game, and organizes your pictures in calendar form. Check out the gallery for a look at some of the highlights from the week, and let us know about some of your own app highlights in the comments.

HephaHeat: Low frequency induction heating elements by Steorn Induction heating relies on the principle of electromagnetic induction. This principle states that when a conductive material is placed in a rapidly changing magnetic field a current will flow in the conductive material. Typically when using an induction heater the material to be heated is placed in a copper coil which has a rapidly changing magnetic field. As this acts like the primary of a transformer, the material then effectively acts as the short circuit secondary winding of the transformer. The current flow thereby created combined with the resistance properties of the material generate a loss which is expressed as heat. To date induction coils have been used as a method of precisely and accurately heating conductive materials.

It's solar solar! New process uses sun's energy for producing photovoltaic materials True energy independence requires that we can manufacture the systems that collect solar or other renewable energy while using only those same renewable sources of energy. Researchers at Oregon State University therefore celebrate their breakthrough in producing solar energy materials with the power of the sun. Even better, the process offers time saving and cost benefits over current processes. © Oregon State UniversityThe new process relies on a continuous production process. Solar power heats materials in a continuous flow micro-reactor to generate a photosensitive ink which can be used to print thin film solar panels. Compared to current manufacturing methods, which are mostly batch processed, the continuous flow approach saves time -- producing materials in minutes that might take half an hour to several hours by traditional methods.

phase 9 The whole winter of 2009 we were manually creating the energy sources. The source itself, the structure of which we managed to understand due to the researches of the ancient monuments, is a very complex and multilevel construction. It took us a lot of time to prepare the whole system which then will be installed into the floor, walls and ceilings of the pyramid. In the process of making we were sure that something absolutely special was waiting for us. And we will tell you why: when in the premises of the house, where the sources were being made, one had assembled 15% of the device, at night in the house the object appeared, which emerged from nowhere and hovered above the windowsill.