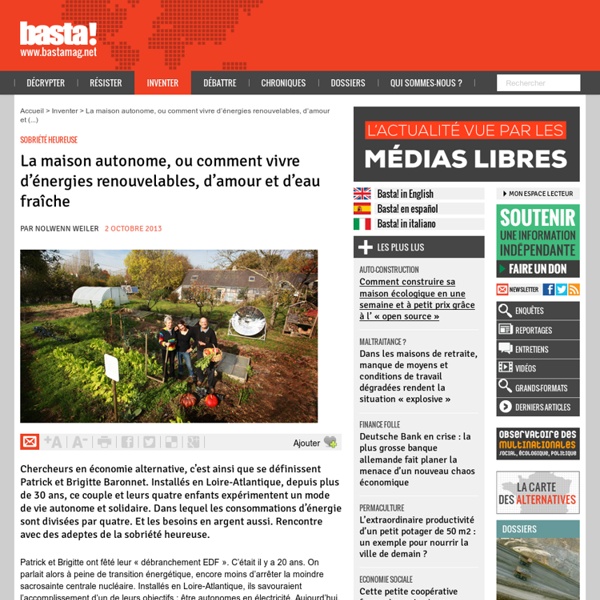 Embrace the Coming Ecological Inflection Point and Great Transition Earth is dying Environmental awareness must soon reach a critical mass, whereby massive societal resources are re-allocated to scale up solutions in a great ecological transition; before biosphere, social, and economic collapse become unavoidable. An approaching ecological inflection point reflects a narrow band of opportunity to repair fragmented, quivering nature, clearly at its breaking point, before it is too late. By Dr. Glen Barry

HemLoft, a Canadian Treehouse Even with good knowledge of the woods it took Joel months to find just the right tree to carry the treehouse two architect friends helped him to design. The egg shaped bubble, wrapped around the trunk of the tree, is reminiscent of the Yellow treehouse in New Zealand. Joel's quest for the perfect tree was guided by a location that wasn't too arduous to reach and by aesthetics so that the proportions of the house would be in harmony with the land and its surroundings. This is a process all natural builders go through trying to find the right local materials and the right design for the right plot of land. Joel has come to realise that building this tiny place in the trees was an expression of his personality, something all too often people don't get the opportunity to discover when they buy a home designed for an off-the-peg person which has never existed. The treehouse sits amongst Canadian Hemlock from which it takes its name, The HemLoft.

This (theoretical) house is entirely powered by exercise How would you like it if every single room in your house was an exercise station? You think that would suck? Well, maybe it would create a lot of unpleasant pressure to be working out and make you feel like a big loser all the time, but then again, maybe it would make exercising so convenient that the habit would just fold seamlessly into your life. And then, what if your workout was generating the power you needed to cook, clean, and entertain yourself? Rising from the ashes, a Buffalo suburb ends its dependence on coal First in a series on communities overcoming obstacles to become cleaner and greener. Sixteen months ago, the coal-fired Huntley Generating Station, which sits on the banks of the Niagara River, stopped producing power for first time since World War I. Erie County lost its largest air and water polluter. But the town of Tonawanda, a working class Buffalo suburb 13 miles downstream of America’s most storied waterfalls, also lost its biggest taxpayer. The impact of Huntley’s decade-long slowdown — and finally shutdown — hit this upstate New York community like a punch to the gut.

Vina’s Tiny House I am a designer who always wanted to design and build my own house, but I couldn’t find a way to afford it. With the tiny house movement, I found a way to do so for $35,000. My design has 140 sf of living space (based on 8’ x 20’ trailer) and is wholly self-sufficient. If Bilbo Baggins built a zero-energy hobbit home, this is what it would look like Many zero-energy, efficient green homes look like boxes. Maybe they’re repurposed shipping containers, or maybe they’ve just got those clean, straight lines that zip off into the future and are so popular today. Either way, they’re rarely cozy. Planting Seeds When it comes to sustainability, the path forward might mean looking back. By Yvette Cabrera on Jul 21, 2020 at 3:59 am Although I was not born in time to witness this era, my dad would talk often about his battle to improve the quality of tortillas sold to the public. Corn, both a basic staple of the Mexican diet and a symbol of the country’s indigenous roots, allowed my dad, who grew up poor and never went to college, to become a successful entrepreneur. Yet, while he won the battle — producing some of the finest tortillas in Mexico City at the time, with lines of customers winding around city corners — he ultimately lost a war with the Mexican government, and this eventually drove him out of business. He immigrated to the United States to start fresh, but he never lost that connection to the land: His springtime plantings would produce a bounty of fresh corn for us in the summer. When I was in high school, we moved on to plant a full-fledged garden. My mom would pluck the blossoms off the squash we grew, simmer them in tomatoes, onions, and chiles, and then tuck it all into a handmade tortilla.

Tiny RedTiny House Blog by Lynne Hopwood I can tell you that there is nothing like owning your own place, and either having no debt or such a small debt that you don’t even feel it!! When you are not chasing high-paying jobs to make ends meet, you can focus on any number of things: a new career, travel, relationships, getting healthy and growing a garden; getting outside and breathing the fresh air instead of the stale air of an office cubicle; or just spending more quality time with friends and family. Paying off a mortgage often consumes decades of your life. Are Green Roofs the Way of the Future? New research has many scientists more confident in the value of maintaining green roofs than ever before. Not only do green roofs – tops of building that grow plants – replenish vegetation that is normally destroyed in urban areas in favor of construction, they also help to battle climate change. The presence of plants helps turn rainwater into water vapor, which in turn helps to cool the air.

Tiny House Building Checklist On this page I hope to outline the majority of the steps that I have taken to build my Tiny House to help other people who are building Tiny Houses. It will also serve as a working list for myself during the building process. This list is really only for a high level view of how to build a Tiny House, I will detail in depth everything on this page: Ryan’s Tiny House as I complete each aspect of the build. If you have ideas for improvements or feedback let me know through the contact us menu link. Before You Build Cool roofs offer a salve for hot cities — and the climate, too From his office in the Berkeley hills, Art Rosenfeld looks out on the heart of California’s Bay Area. The 87-year-old scientist keeps a pencil and a small notebook in his breast pocket, ready to jot down a quick note or make a calculation. With these simple tools he has been able to influence state and national energy policy over the years. But for now they stay tucked away as he enjoys the scenery.

Luxury Lotus Tent: Yurt-Like Shelter Packs Into Duffle Bag Unless you’re the hardcore backpacking type, chances are you’ve had a camping experience in a squat, flimsy tent that left you wishing for the comfort of your bed and a shelter that’s at least tall enough to stand up in. Minimalist tents have their time and place, but sometimes you want a shelter that offers more room – maybe even enough room to hold a yoga class or host a dinner party. But it still has to be easy to transport and set up.

14 Tips for Using Less Heat this Season Whether you have electric or gas heat, warming your home isn’t so hot for the environment. The majority of our electricity here in the U.S. comes from dirty coal. Natural gas drilling often uses a dangerous method called hydraulic fracturing or “fracking,” which contaminates water in the areas around drilling sites. Never fear! There are lots of ways that you can reduce your heating bill without setting hand on the thermostat. 1.