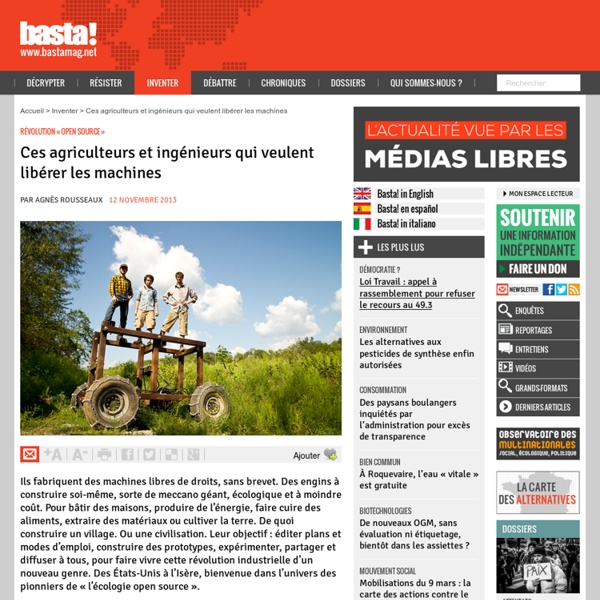 How To Build A 5 Gallon Bucket Hydroelectric Generator With self-sufficiency on the rise in almost every large city, it is common to see people trying to set up their own power or water supply. Recycling is almost a regular thing now so those who want to live really independently choose a hydroelectric generator as their next DIY project to make. Making such a system is quite easy and actually there is no need for a bunch of extra materials to get in order to begin the whole construction phase. A 5-gallon bucket should be your base and the rest will easily fall into place.

On the Phenomenon of Bullshit Jobs Ever had the feeling that your job might be made up? That the world would keep on turning if you weren’t doing that thing you do 9-5? David Graeber explored the phenomenon of bullshit jobs for our recent summer issue – everyone who’s employed should read carefully… On the Phenomenon of Bullshit Jobs by David Graeber. In the year 1930, John Maynard Keynes predicted that, by century’s end, technology would have advanced sufficiently that countries like Great Britain or the United States would have achieved a 15-hour work week.

Inexperienced Guy Builds Cool Mini Camper Experience is no substitute for enthusiasm it seems, as proven by this novice builder. It took approximately 60 days for this guy to build this cool mini camper. It turned out so well that you would never guess that it was built by someone with almost no building experience at all! The first thing that he did was to buy a trailer that was suitable for the intended purpose. He began building from the bottom up in order to ensure that he could properly insulate the camper. The sides were cut out in the desired shape, not cut out to fit frames. How to Build a Low-tech Internet Picture: A node in the Scottish Tegola Network. More than half of the global population does not have access to the "worldwide" web. Up to now, the internet is mainly an urban phenomenon, especially in "developing" countries.

How to- Wind Turbine Made from Scrap Metal... This is my first Instructable so bare with me. This following Instructable is for A Wind Turbine that i Designed and Made out of Salvaged and Recycled Materials Because of the nature of the materials,everybody building them this way will all be different, don't let how i made this turbine affect how you make yours. build it with what you got. Wind turbines are not only Great to make but if made right can be good source of electricity.