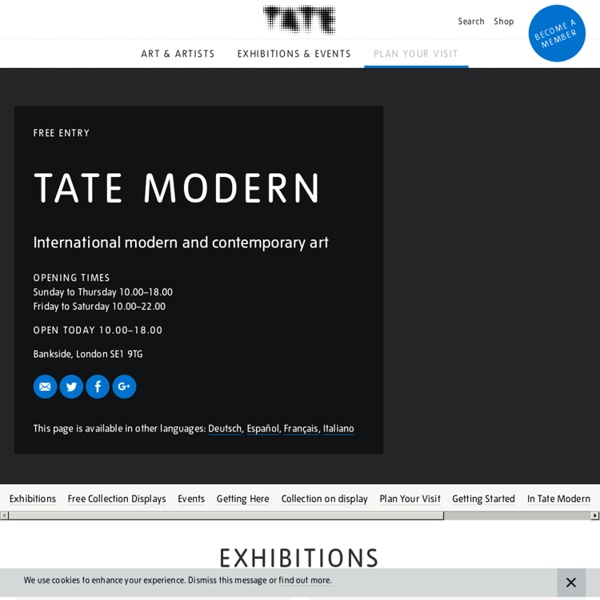 Southwark (Jubilee Line, 600 metres approx Blackfriars: District and Circle Line, 800 metres approx St Paul’s: Central Line, 1,100 metres approx. Routes 45, 63 and 100 stop on Blackfriars Bridge Road Routes RV1 and 381 stop on Southwark Street Route 344 stops on Southwark Bridge Road Blackfriars 300 metres from the South exit; 800 metres from the North exit. London Bridge 1,100 metres approx. The Tate Boat runs every forty minutes along the Thames between Tate Britain and Tate Modern. Other river services run between Millbank Pier and Bankside Pier. Cycle Hire Docking Stations are located on New Globe Street and Southwark Street. A drop off / pick up point is situated on Holland Street, just outside the main entrance. There are no parking facilities at Tate Modern or in the surrounding streets. A drop off / pick up point is situated on Southwark Street, a short walk from the main entrance.

Concordia University Chicago - Art Lessons Welcome to Concordia University Chicago’s link to Artists and Their Art: Sharing Visual Stories, a tool to promote visual literacy through artwork. Recognizing visual cues in a work of art as well as being aware of the times and conditions in which an artist lived enables students to better interpret its imagery, draw conclusions about its effectiveness, and speak critically about the art. Art education research indicates students enjoy a richer art experience and improved visual comprehension when the following four disciplines are included in the art experience: Art History (the study of past artists), Art Aesthetics (response to art), Art Criticism (discussion of art using art vocabulary), and Art Production (hands-on making of art). Artists and Their Art: Sharing Visual Stories focuses mainly on art history by providing a biographical sketch of the artist, an image of one of the artist’s specific works and details about that work.

Concept - Echigo-Tsumari Art Field Humans are part of nature As our civilization reaches a critical juncture, the rich nature of the satoyama existence in Echigo-Tsumari can impel us to review our attitude to the environment, calling into question the modern paradigm which has caused such environmental destruction. This is the origin of the concept “humans are part of nature”, which has become the overarching concept for every program taking place in the Echigo-Tsumari Art Field. Regional development in Echigo Tsumari is advanced with the aim to present a model for how people can relate to nature. “In summer, cultivate the fields; in winter, cultivate the mind.”

Cui Xiuwen Cui Xiuwen Background Cui Xiuwen was born in the city of Haerbin, China. In 1990, she graduated from Fine Arts School of Northeast Normal University. Hamburger Bahnhof, Berlin The Nationalgalerie’s permanent collection at the Hamburger Bahnhof – Museum für Gegenwart – Berlin features major figures and movements in art since 1960, taking up where the Neue Nationalgalerie leaves off. The museum reveals these artistic trends in all their diversity: the audacious redefinitions of painting, the continuation of traditional sculpture in object art, the special role of photography and multimedia concepts in video and film. A historically-defined exhibition style was consciously avoided in favour of an open presentation concept embracing all the media used by the various artists. Despite the striking spaciousness of its premises, it is not actually possible to show all of the museum’s work at once.

Hayward Gallery See all events taking place in Hayward Gallery Hayward Gallery has a long history of presenting work by the world's most adventurous and innovative artists. For free entry to all exhibitions become a Southbank Centre Member. Opened by Her Majesty The Queen in 1968, it is an outstanding example of sixties brutalist architecture and is one of the few remaining buildings of this style. It was designed by a group of young architects, including Dennis Crompton, Warren Chalk and Ron Herron.

Frog Frog 15 hits the newsstands in November 2015. Olympia Campbell is on the cover, photographed for Frog by Jüergen Teller at the Musée Picasso in Paris. This is a very special issue, as we celebrate Frog’s 10th anniversary! For this anniversary issue, Juergen Teller shot a 28-page super exclusive spread at the Musée Picasso in Paris especially for us, while Stéphanie Moisdon interviewed Bernard Picasso himself.

ROMAN OPALKA: The End is Defined - Christie's Mayfair - 29 Jan-18 Apr 2015 Private Selling Exhibition Christie’s Mayfair presents an exhibition that explores how we measure and perceive the passing of time. In entirely different ways, the artists Roman Opalka (1931–2011) and Darren Almond (b. 1971) explore the very essence with which we grasp the progression and flow of time itself. Hundreds of Vintage Posters Are Now Available to Download and Print 100% Free - Creators If the posters of today still had the look of those of yesteryear, would they still get tagged and trolled as often? Much work today, it seems, lacks the graphic audacity of yore, opting instead for forms and formats we've become accustomed to. That's why, when you find vintage posters in flea markets, you find prices that might suggest they were just printed. Many of these posters are available online, but it's often difficult to find high enough quality to print them beyond standard A4 printer paper sizing.

Alina Szapocznikow: Sculpture Undone, 1955–1972 A sculptor who began working during the postwar period in a classical figurative style, Alina Szapocznikow radically reconceptualized sculpture as an imprint not only of memory but also of her own body. Though her career effectively spanned less than two decades (cut short by the artist’s premature death in 1973 at age 47), Szapocznikow left behind a legacy of provocative objects that evoke Surrealism, Nouveau Réalisme, and Pop art. Her tinted polyester casts of body parts, often transformed into everyday objects like lamps or ashtrays; her poured polyurethane forms; and her elaborately constructed sculptures, which at times incorporated photographs, clothing, or car parts, all remain as wonderfully idiosyncratic and culturally resonant today as when they were first made. Well known in Poland, where her work has been highly influential since early in her career, Szapocznikow’s compelling book of work is ripe for art historical reexamination.

Top 10 Paintings Which Define Human Emotion It is always very soothing to see a good painting. We visit exhibitions to promote art and try understanding the meaning behind the drawings. There are many times when a painting reveals emotions of the painter to a great extent. The colors he uses, reflects his outlook toward life. There have been many great painters who have given us immortal masterpieces.

Materializing "Six Years": Lucy R. Lippard and the Emergence of Conceptual Art N. E. Thing Co. Iain Baxter (Canadian, b. England, 1936) and Ingrid Baxter (American, b. 1938). 1. Time, detail from North American Time Zone Photo–V.S.I. Famous Artworks Inspired by Their Creators’ Nervous Breakdowns Van Gogh cut his ear off. Gauguin had a mid-life crisis and shacked up with frighteningly young Tahitian girls. Munch suffered from hallucinations. It’s a cliché that all great artists are crazy. However, the “tortured artist” stereotype certainly has a basis in fact — many famous artists’ most emotionally resonant works were created during times of emotional turmoil, the result of an all-consuming mental ailment.