Aduino based. Novena. PostMarket OS. The Life of Kenneth: Creating an Autonomous System for Fun and Profit. At its core, the Internet is an interconnected fabric of separate networks. 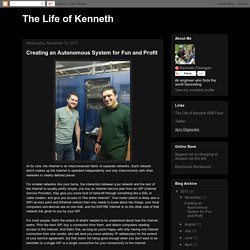 Each network which makes up the Internet is operated independently and only interconnects with other networks in clearly defined places. For smaller networks like your home, the interaction between your network and the rest of the Internet is usually pretty simple: you buy an Internet service plan from an ISP (Internet Service Provider), they give you some kind of hand-off through something like a DSL or cable modem, and give you access to "the entire Internet". Your router (which is likely also a WiFi access point and Ethernet switch) then only needs to know about two things; your local computers and devices are on one side, and the ENTIRE Internet is on the other side of that network link given to you by your ISP. For most people, that's the extent of what's needed to be understood about how the Internet works.

Pick the best ISP, buy a connection from them, and attach computers needing access to the Internet.

QUEBES OS. SailFish. Eloston/ungoogled-chromium: A Google Chromium variant for removing Google integration and enhancing privacy, control, and transparency. RePhone modular phone kit lets you build your own smartphone in minutes. There is a reason that makers and tinkerers love the Raspberry Pi so much. 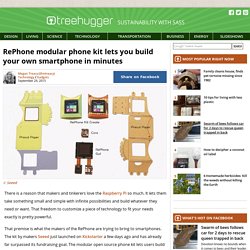 It lets them take something small and simple with infinite possibilities and build whatever they need or want. That freedom to customize a piece of technology to fit your needs exactly is pretty powerful. That premise is what the makers of the RePhone are trying to bring to smartphones. The kit by makers Seeed just launched on Kickstarter a few days ago and has already far surpassed its fundraising goal. The modular open source phone kit lets users build any type of communication device they can imagine, not just a phone.

A basic entry pledge of $12 gets you the RePhone Core Module GSM + BLE, a tiny computer chip that the creators claim is the world’s smallest System-on-Chip (SOC) for wearables and Internet Of Things. . © Seeed With pledges up to $400 you can get increasingly more modules. 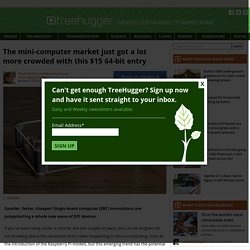 Single board computer (SBC) innovations are jumpstarting a whole new wave of DIY devices. If you've been living under a rock for the last couple of years, you can be forgiven for not knowing about the revolution that's been happening in micro-computing, such as the introduction of the Raspberry Pi models, but this emerging trend has the potential to radically change the DIY tech scene. Originally designed to teach computer science and coding skills, these single board computers aren't just for kids or students anymore, as they've evolved into tiny machines capable of handling quite a few common IT tasks at home, such as streaming media or serving as a control hub for other smart devices. The PINE A64 runs its operating system from a removable microSD card, which can easily be swapped out and/or updated, and the unit is designed to run open source platforms such as Android, Ubuntu, or OpenHAB IoT. 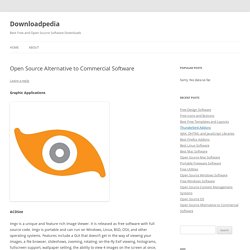 It is released as free software with full source code. Imgv is portable and can run on Windows, Linux, BSD, OSX, and other operating systems. Features include a GUI that doesn’t get in the way of viewing your images, a file browser, slideshows, zooming, rotating, on-the-fly Exif viewing, histograms, fullscreen support, wallpaper setting, the ability to view 4 images on the screen at once, adjustable thumbnail sizes, playlists, view and download images from Web sites, movie playing, file searching/filtering, multiple directory loading, transitional effects, image hiding and more. Cornice is a cross-platform image viewer written in Python + wxPython + PIL. Adobe After Effects Jahshaka is an editing and effects system. Adobe FrameMaker and QuarkXPress KWord is a frame-based word-processing and desktop publishing application.