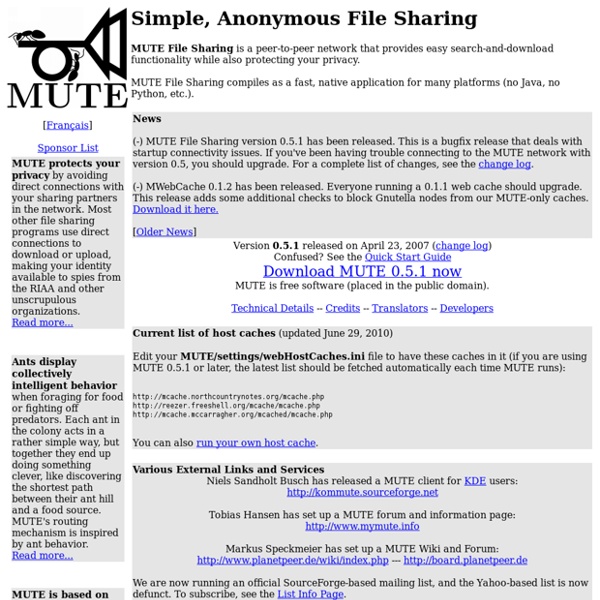 Anonymous P2P Interest in anonymous P2P systems has increased in recent years for many reasons, ranging from the desire to share files without revealing one's network identity and risking litigation[1] to distrust in governments, concerns over mass surveillance and data retention, and lawsuits against bloggers.[2] Motivation for anonymity[edit] There are many reasons to use anonymous P2P technology; most of them are generic to all forms of online anonymity. P2P users who desire anonymity usually do so as they do not wish to be identified as a publisher (sender), or reader (receiver), of information. Common reasons include: A particularly open view on legal and illegal content is given in The Philosophy Behind Freenet. Arguments for and against anonymous P2P communication[edit] General[edit] Some[who?] Easily accessible anonymous P2P networks are seen by some as a democratization of encryption technology, giving the general populace access to secure communications channels already used by governments.

Music Player Daemon What opinion do professional developers have of online programming courses such as CodeAcademy or Codeschool? $300 Data Recovery: Cheap Hard Drive & RAID Data Recovery Los Angeles Stoyan's web dev blog: phpied.com Diceware Passphrase Home This page offers a better way to create a strong, yet easy to remember passphrase for use with encryption and security programs. Weak passwords and passphrases are one of the most common flaws in computer security. Take a few minutes and learn how to do it right. The information presented here can be used by anyone. No background in cryptography or mathematics is required. This page is also available in Chinese, Esperanto, Finnish, French, Italian, Japanese, Polish and Spanish. Try our free Big Number Calculator Java applet. What Is A Passphrase? A passphrase is a bunch of words and characters that you type in to your computer to let it know for sure that the person typing is you. Passphrases are used with Wi-Fi wireless network security systems such as WPA and WPA2, when used in personal shared key (PSK) mode. Passphrases differ from passwords only in length. What Is Diceware? Here is a short excerpt from the Diceware word list: Using Diceware Example Your passphrase would then be: S.

Edward Snowden Explains How To Reclaim Your Privacy LAST MONTH, I met Edward Snowden in a hotel in central Moscow, just blocks away from Red Square. It was the first time we’d met in person; he first emailed me nearly two years earlier, and we eventually created an encrypted channel to journalists Laura Poitras and Glenn Greenwald, to whom Snowden would disclose overreaching mass surveillance by the National Security Agency and its British equivalent, GCHQ. This time around, Snowden’s anonymity was gone; the world knew who he was, much of what he’d leaked, and that he’d been living in exile in Moscow, where he’s been stranded ever since the State Department canceled his passport while he was en route to Latin America. His situation was more stable, the threats against him a bit easier to predict. Our first meeting would be in the hotel lobby, and I arrived with all my important electronic gear in tow. Most of the lobby seats were taken by well-dressed Russians sipping cocktails. Eventually, Snowden appeared. Photo: Sue Gardner Lee: Nice.