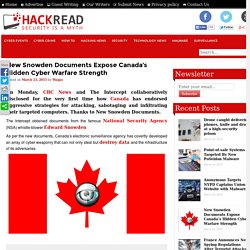 Thanks to New Snowden Documents. The Intercept obtained documents from the famous National Security Agency (NSA) whistle-blower Edward Snowden. Leaked NSA Documents on How to remain Anonymous online. Internet privacy one of the items on wish list of numerous online users. 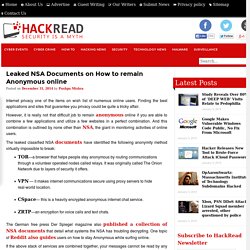 Finding the best applications and sites that guarantee you privacy could be quite a tricky affair. However, it is really not that difficult job to remain anonymous online if you are able to combine a few applications and utilize a few websites in a perfect combination. Leaving Facebook... Anonymous Documentary - How Anonymous Hackers Changed the World Full Documentary. The Mystery of the Creepiest Television Hack. GIF by Dan Stuckey Right up until 9:14 PM on November 22nd, 1987, what appeared on Chicago's television sets was somewhat normal: entertainment, news, game shows. 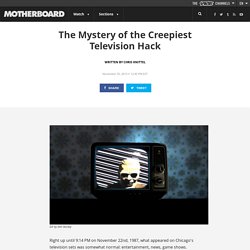 That night, as usual, Dan Roan, a popular local sportscaster on Channel 9's Nine O'Clock News, was narrating highlights of the Bears' victory over the Detroit Lions. And then, suddenly and without warning, the signal flickered up and out into darkness. Anonymous Lashes Out at ISIS, calls them Gangsters and Killers. Anonymous, a loose collective of hacktivists, have called Islamic State militants (ISIS) as gangsters who have hijacked Islam and have launched a social media campaign against them, according to reports. 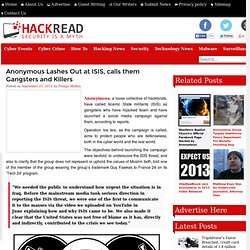 Operation Ice Isis, as the campaign is called, aims to protect people who are defenseless, both in the cyber world and the real world. U.S. Military Hackers Humiliated by Civilian Hackers in Cyber War Games. A series of online war games was held by the US military to ditch reservist hackers against its active-duty cyber-warriors. 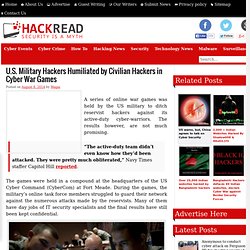 The results however, are not much promising. Anonymous ►Operation Green Rights. Snowden Leaks Documents on NSA Intelligence Relationship with Israel. Anonymous asks Elite hackers to join them in a massive cyber attack on Israel. The online hacktivist Anonymous has a message for Israeli government in which the group has asked elite hackers from around the world to join them and conduct a massive cyber attack against the state of Israel. 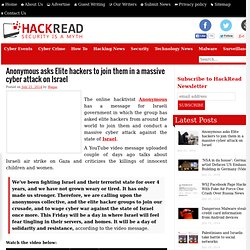 A YouTube video message uploaded couple of days ago talks about Israeli air strike on Gaza and criticizes the killings of innocent children and women. We’ve been fighting Israel and their terrorist state for over 4 years, and we have not grown weary or tired. Anonymous vows to unleash its 'wrath' on U.S. lawmakers over cybersecurity bill. A threat by the hacktivist group Anonymous over a new cybersecurity bill scheduled for committee markup next month is being taken seriously by the Washington D.C. capitol police. 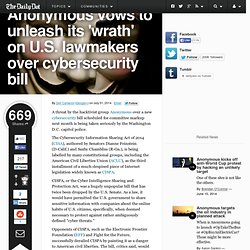 The Cybersecurity Information Sharing Act of 2014 (CISA), authored by Senators Dianne Feinstein (D-Calif.) and Saxby Chambliss (R-Ga.), is being labelled by many constitutional groups, including the American Civil Liberties Union (ACLU), as the third installment of a much-despised piece of Internet legislation widely known as CISPA. CISPA, or the Cyber Intelligence Sharing and Protection Act, was a hugely unpopular bill that has twice been dropped by the U.S. Senate. As a law, it would have permitted the U.S. government to share sensitive information with companies about the online habits of U.S. citizens, specifically, when deemed necessary to protect against rather ambiguously defined “cyber threats.” Sens. Cryptome to Publish All Remaining Edward Snowden Documents in July. Anonymous Hacks New York’s Board of Elections Website Against Brazil Football World Cup. Anonymous, the hacktivist collective, compromised the New York State Board of Elections official website recently to protest against the FIFA World Cup starting from tomorrow in Brazil. 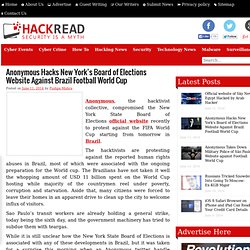 The hacktivists are protesting against the reported human rights abuses in Brazil, most of which were associated with the ongoing preparation for the World cup. The Brazilians have not taken it well the whopping amount of USD 11 billion spent on the World Cup hosting while majority of the countrymen reel under poverty, corruption and starvation. Edward Snowden's statement in support of Reset the Net - Reset The Net. Scarface Writer Oliver Stone to Make a Film on Edward Snowden’s Whistleblowing. Oliver Stone is known for depicting famous [rather infamous] real life stories on screen. 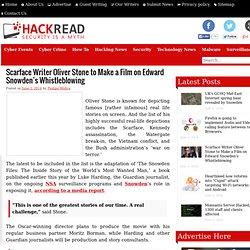 Anonymous plans cyberattacks on World Cup 2014 sponsors. A branch of the notorious hacktivist collective Anonymous is bringing its digital hellfire down upon the World Cup. 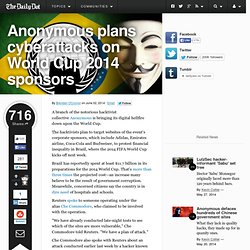 The hacktivists plan to target websites of the event's corporate sponsors, which include Adidas, Emirates airline, Coca-Cola and Budweiser, to protest financial inequality in Brazil, where the 2014 FIFA World Cup kicks off next week. Brazil has reportedly spent at least $11.7 billion in its preparations for the 2014 World Cup. In Defense of Edward Snowden against John Kerry’s Slanderous Attacks. “The notion that a radical is one who hates his country is naïve and usually idiotic. He is, more likely, one who likes his country more than the rest of us, and is thus more disturbed than the rest of us when he sees it debauched. He is not a bad citizen turning to crime; he is a good citizen driven to despair.” Snowden explains what the NSA can do with your phone even when it’s off. Edward Snowden, ex-NSA contractor and the whistleblower about NSA’s massive surveillance dragnets, says the US government can remotely control a targeted cellphone.

They can turn it into a microphone, they can take pictures from it, they can take data off of it.” NSA releases Snowden’s Email Conversation! Snowden Responds! In an interview with NBC, former National Security Agency (NSA) tech and now a whistleblower Edward Snowden claimed that the agency had complete record of his internal complaints regarding government policy. Now the government of United States has released an email in which Snowden has been asking several questions. The email does not qualify the cetagary of whistleblowing, means that publicizing such an email is not a surprise. As mentioned earlier, Snowden himself has indicated that he raised internal worry more than 10 times before he leaked his set of documents. Read the email below: Snowden e-mail released by NSA. Watch Primetime Special: Inside the Mind of Edward Snowden. A key claim by Edward Snowden — that his unmasking of government spying programs has not hurt anyone — was immediately called into question Wednesday by a former ambassador to Russia and a former top counterterrorism official.

Snowden, defending himself during an exclusive NBC News interview with Brian Williams, said that the government had never shown “a single individual who’s been harmed in any way” by his disclosures. But Michael McFaul, who left the ambassadorship earlier this year to teach at Stanford University, said that the revelations had damaged American diplomatic relationships with friendly countries who were upset by National Security Agency surveillance. “That’s damage to the United States,” McFaul said. Matt DeHart claims FBI tortured him and grilled him about Anonymous and WikiLeaks. NSA's Mystic Program: The Identity of Country X is Afghanistan. Israel Spied on the US with NSA’ assistance! Says the Latest Snowden Revelation. Last year, we updated you how NSA shares personal details of U.S citizens with Israel. Edward Snowden: The Biggest Revelations Are Yet to Come.

VANCOUVER, Canada — Edward Snowden on Tuesday said the biggest revelations have yet to come out of the estimated 1.7 million documents he acquired from the National Security Agency. On Liberty: Edward Snowden and top writers on what freedom means to them. Shami Chakrabarti Writers have always been a big part of Liberty. Since our very beginnings, as the National Council for Civil Liberties (NCCL) in 1934, they've played a key role in our battle to protect civil liberties and promote human rights in Britain. Edward Snowden, after months of NSA revelations, says his mission’s accomplished. New Snowden Leak: Documents Expose Government False Flag Internet Strategy » The Rundown Live. NSA files decoded: Edward Snowden's surveillance revelations explained.

Snowden, GCHQ: How the gov’t infiltrates websites, uses social media to destroy - San Diego Top News. The latest Snowden leak about how the government is using social media sites like Facebook, Twitter, YouTube, and blogs to deceive and destroy unaware people and companies is getting a lot of press in Europe, but there is an awful silence about it in the American media.