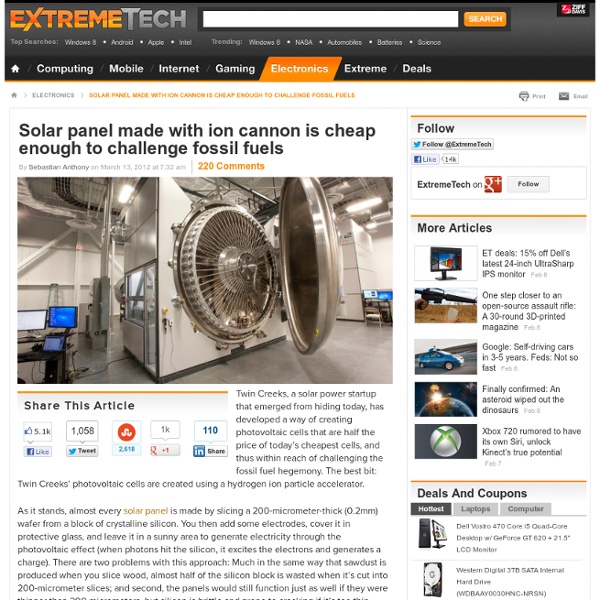 Twin Creeks, a solar power startup that emerged from hiding today, has developed a way of creating photovoltaic cells that are half the price of today’s cheapest cells, and thus within reach of challenging the fossil fuel hegemony. The best bit: Twin Creeks’ photovoltaic cells are created using a hydrogen ion particle accelerator. As it stands, almost every solar panel is made by slicing a 200-micrometer-thick (0.2mm) wafer from a block of crystalline silicon. You then add some electrodes, cover it in protective glass, and leave it in a sunny area to generate electricity through the photovoltaic effect (when photons hit the silicon, it excites the electrons and generates a charge). This is where Twin Creeks’ ion cannon, dubbed Hyperion, comes into play. According to Technology Review, ion beams have been considered before, but particle accelerators were simply too expensive to be commercially viable. Read more at Twin Creeks

So long, silicon: Researchers create solar panels from cheap copper oxide Researchers from the University of California and Berkeley Lab have discovered a way of making photovoltaic cells out of any semiconducting material, not just beautiful, expensive crystals of silicon. In principle, this could open the doors to much cheaper solar power. Almost every solar panel on the market is made by cutting off two thin (200 micron, 0.2mm) slices from a large crystal of silicon, and then doping them with impurities to enhance the photovoltaic effect — phosphorous to make n-type silicon, and boron to make p-type silicon. These slices are layered together, electrodes are added to the top and bottom, the whole thing is framed in protective glass — and voila, a standard photovoltaic cell. Now, in theory, you can dope any semiconductor — but cheaper, more-readily-available semiconductors, such as copper oxide, don’t retain dopants very well, eventually leading to the breakdown of the p-n junctions. Silicon holds dopants very well, but it isn’t cheap. What’s next?

Recycling For Money: Don't throw that away Most of us have piggy banks or some process of saving our loose change. But, saving pennies never goes any further than this. There is a lot of value in the things we throw in the landfill everyday. Copper is found in electrical, plumbing, heating and air systems, and automobiles. Before throwing away that lamp, cut the cord and place in a bin If you are junking a car, take out the radiator and other copper tubing. Brass is also similar to copper and used liberally in most homes. Most of us have saved aluminum cans. Lead is not as common and found in such items as wheel weights, old window weights, and fishing tackle Gold, yes, gold can be found in landfills. To find out what your recyclables are worth check out ScapIndex.com.

Artificial photosynthesis A sample of a photoelectric cell in a lab environment. Catalysts are added to the cell, which is submerged in water and illuminated by simulated sunlight. The bubbles seen are oxygen (forming on the front of the cell) and hydrogen (forming on the back of the cell). Artificial photosynthesis is a chemical process that replicates the natural process of photosynthesis, a process that converts sunlight, water, and carbon dioxide into carbohydrates and oxygen. The term is commonly used to refer to any scheme for capturing and storing the energy from sunlight in the chemical bonds of a fuel (a solar fuel). Photocatalytic water splitting converts water into protons (and eventually hydrogen) and oxygen, and is a main research area in artificial photosynthesis. Overview[edit] The photosynthetic reaction can be divided into two half-reactions (oxidation and reduction), both of which are essential to producing fuel. History[edit] Artificial photosynthesis remained an academic field for many years.

Startup Aims to Cut the Cost of Solar Cells in Half Twin Creeks Technologies—a startup that has been operating in secret until today—has developed a way to make thin wafers of crystalline silicon that it says could cut the cost of making silicon solar cells in half. It has demonstrated the technology in a small, 25-megawatt-per-year solar-cell factory it built in Senatobia, Mississippi. Siva Sivaram, the CEO of Twin Creeks, says the company’s technology both reduces the amount of silicon needed and the cost of the manufacturing equipment. The conventional way to make the crystalline silicon wafers—which account for the bulk of solar cells—involves cutting blocks or cylinders of silicon into 200-micrometer-thick wafers, a process that turns about half of the silicon into waste. Twin Creeks’ process makes 20-micrometer-thick wafers largely without waste.

Parabolic trough Array of parabolic troughs. A parabolic trough is shaped as a parabola in the x-y plane, but is linear in the z direction A diagram of a parabolic trough solar farm (top), and an end view of how a parabolic collector focuses sunlight onto its focal point. A parabolic trough is a type of solar thermal collector that is straight in one dimension and curved as a parabola in the other two, lined with a polished metal mirror. The energy of sunlight which enters the mirror parallel to its plane of symmetry is focused along the focal line, where objects are positioned that are intended to be heated. For example, food may be placed at the focal line of a trough, which causes the food to be cooked when the trough is aimed so the Sun is in its plane of symmetry. For other purposes, there is often a tube, frequently a Dewar tube, which runs the length of the trough at its focal line. Efficiency[edit] Design[edit] Most mirrors used are parabolic and single-piece. Variations[edit] Enclosed trough[edit]

The rising tide of climate change - The Drum Updated Wed 14 Mar 2012, 8:58am AEDT The climate is changing, according to a new report from the Bureau of Meteorology (BoM) and the CSIRO. Days and nights are getting hotter, sea levels are rising, rainfall patterns are changing. Yawn. Heard it all before. And yet, Australia's pre-eminent scientific organisations feel the need to keep telling us this. Perhaps it's because not everyone is convinced. Those voices are in the minority, but the idea is beguiling. We could continue to expand our cities, grow our wealth, and generate electricity from cheap coal as before. The BoM and CSIRO are probably also aiming to support the argument that something needs to be done with yet another report showing the problem is worsening. Repetition is the key to remembering information and CSIRO and the BoM seem to have taken that message to heart. It might be said that the CSIRO and the BoM are wasting their time; most people won't listen. But for the BoM and CSIRO, they must continue.

For trade visitors | Clean Energy Expo For the first time, Clean Energy Expo Asia is co-located with Energy Efficiency Asia and Carbon Forum Asia to provide a dedicated platform for policy makers and industry practitioners to address key issues, develop business opportunities and discuss practical solutions towards securing Asia’s energy future. GLOBAL MARKETPLACESource for clean energy, energy efficiency, carbon and energy management solutions, from over 200 international exhibitors, from over 50 countries, all under one roof. CONTENT RICH CONFERENCE PROGRAMHear from over 200 industry thought leaders who will address key issues and discuss practical solutions towards securing Asia’s energy future CROSS INDUSTRY NETWORKINGCreate valuable business connections with clean energy, energy effi ciency and carbon professionals from over 50 countries BUSINESS MATCHINGMaximize your time at the events with our facilitated one-on-one meetings and hosted buyer program customized to help match your needs to our exhibitors

Price per watt See also: Cost of electricity by source for a comparison of prices per watt by generation source Price per watt, or $/W is a common way to compare the capital costs of various forms of electricity generation. It refers to the number of dollars one would have to spend to buy a machine capable of producing one watt of electricity. It is calculated by dividing the total project capital cost by the amount of peak power (watts-peak, or "Wp") it can produce. CAPACITY FACTOR: Capacity factor is actual power produced yearly, relative to what would be produced if the system produced full power all year long. Wind: In 2012, the US had 60 GW of installed wind capacity.[7] If maximum power had been produced 24 hours daily, all year long, 525,600 (60 x 24 x 365) GW hours of energy would have been made. Solar: In the US, photovoltaic (PV) panels will see an average of 4–5 hours per day[9] of full sun, so the effective capacity of solar power generation is 4.5/24, or about 20%.

Now US says solar PV to be cheaper than fossil fuels by 2020 The sharp slump in solar PV prices has caused a dramatic re-evaluation of the technology cost and potential for solar by the world’s largest energy consumers – the US, China, and India – over the last three months. The latest update came from US Energy secretary Stephen Chu, who suggested in a keynote speech late last week that the US government’s “sunshot” program launched in 2020 – with the goal of making solar cheaper than fossil fuels by the end of the decade – was no longer just aspirational, but a growing reality. Chu began by making several observations about the US energy industry as it now stands. Onshore wind is already cheaper than new coal-fired energy, although gas is cheaper than both at around 5.5c/KWh, thanks to the boom in shale gas exploitation. Solar PV comes in at around 15c-24c/KWh. But Chu said the goal is to get solar down to 6.5c/KWh by the end of this decade (remember, Australia’s white energy paper absurdly predicts solar PV at 34c/KWh by 2035!

Watt-peak The nominal power of a photovoltaic (PV) module is determined by measuring in an electric circuit the current and voltage while varying the resistance under precisely defined illumination. These conditions are specified in standards such as IEC 61215, IEC 61646 and UL 1703; specifically the light intensity is 1000 W/m2, with a spectrum similar to sunlight hitting the earth's surface at latitude 35°N in the summer (airmass 1.5), the temperature of the cells being 25 °C. The power is measured while varying the resistive load on the module between an open and closed circuit (between maximum and minimum resistance). The nominal and potentially maximum power is important to the technician planning an installation in order to choose correctly the size of alternating-current converters and the cross-sectional area of the connecting wires. The international System of Units does not permit the use of suffixes or additional symbols.