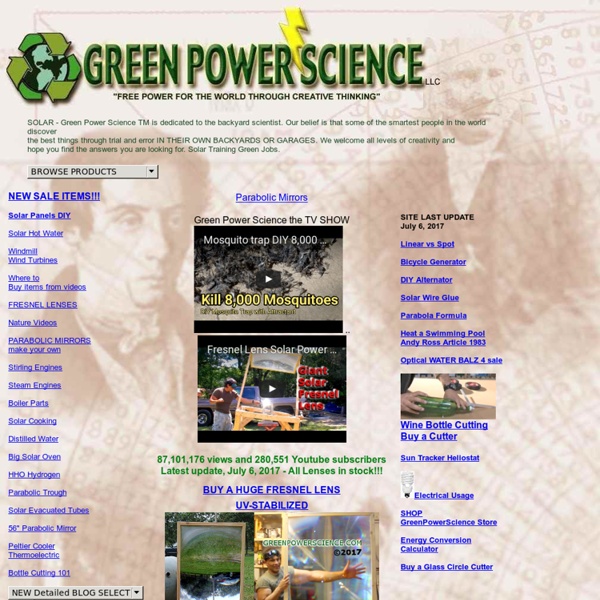 Magnetic Generator - Does it Really Work? Magnetic Generators - A Real Alternative to Solar Power If you’re interested in alternative energy and saving money, you've no doubt thought about looking into solar power. While solar power is still the first choice for many people, magnetic energy is becoming increasingly popular. Despite it's many advantages over solar power, magnetic energy will always be less popular for the simple reason that magnetic generators can't be bought, they have to be built. Using the power of magnetism to produce free energy is nothing new.

A Urine Powered Generator : Maker Faire Africa Posted on Tuesday, November 6, 2012 · 168 Comments Possibly one of the more unexpected products at Maker Faire Africa this year in Lagos is a urine powered generator, created by four girls. The girls are Duro-Aina Adebola (14), Akindele Abiola (14), Faleke Oluwatoyin (14) and Bello Eniola (15). 1 Liter of urine gives you 6 hours of electricity. The system works like this: Earth Day from Space There are many ways to celebrate Earth Day, from sustainability efforts (and check out our new blog, Guilty Planet) to simply appreciating nature. And while this is a beautiful shot of Forest Park right here in Portland, it doesn’t compare — in my eyes — to the perfection of Earth as seen from so far away. In October of 1946, a V-2 missile was launched from New Mexico, straight up into the air.

Eco-Dome: Moon Cocoon - Cal-Earth Building Designs The Eco-Dome is a small home design of approximately 400 square feet (40 sq. meters) interior space. It consists of a large central dome, surrounded by four smaller niches and a wind-scoop, in a clover leaf pattern. Learning and building an Eco-Dome is the next stage after building a small emergency shelter and provides hands-on learning experience in the essential aspects of Superadobe construction. It's small size of approximately 400 square feet (interior space), makes it a manageable structure for the first time owner builder. The finished "very small house" is self-contained and can become a small guest house, studio apartment, or be the first step in a clustered design for community use in an Eco-Village of vaults and domes.

7 car-free cities: Independent of the auto Interested in uplifting stories on the natural world, sustainable communities, simple food, and new thinking on how to live well? Please enter a valid email address and try again! No thanks Whidbey Plans Cost to Build Estimated Material Costs: $35,000 (461 sq ft) or $41,500 (557 sq ft) Want to know how much it will cost to have a contractor build it for you? Produces More Electricity Than Any Other Source For 3 Months, & Breaks 6 TWh in January Clean Power Published on February 6th, 2013 | by Zachary Shahan Denmark, the US, and Germany aren’t the only countries breaking wind power records these days. Spain is also a notable leader seeing strong wind power growth.

Rawlemon’s Spherical Solar Energy-Generating Globes Can Even Harvest Energy from Moonlight The solar energy designers at Rawlemon have created a spherical, sun-tracking glass globe that is able to concentrate sunlight (and moonlight) up to 10,000 times. The company claims that its ß.torics system is 35% more efficient than traditional dual-axis photovoltaic designs, and the fully rotational, weatherproof sphere is even capable of harvesting electricity from moonlight. The ß.torics system was invented by Barcelona-based German Architect André Broessel. He sought to create a solar system that could be embedded in the walls of buildings so that they may act as both windows and energy generators. But the project isn’t only noteworthy for its solar efficiency capabilities - the ß.torics system is designed to generate lunar energy too!

Satter and Eilperin failure to demonstrate learning When delivered, on a silver platter, an opportunity to demonstrate learning and fulfill the Fourth Estate’s essential role of fostering a more informed public, Associate Press reporter Raphael Satter and Washington Post reporter Juliet Eilperin trip over themselves in a rush to press and disseminate deceptive truthiness rather than engage in truthful reporting. Satter seems to double down on reporting innuendoes and falsehoods disproven in multiple investigations by institutions around the world. Although their context couldn’t be determined, the excerpts appeared to show climate scientists talking in conspiratorial tones about ways to promote their agenda and freeze out those they disagree with. Even though noting that the “context couldn’t be determined …”, Satter decides to move forward with “excerpts appear” even though the 2009 “ClimateGate” stolen email leakage was shown, through the following year, to have been a manipulated effort by those seeking to undermine climate science.

Touch the Earth Ranch Do-it-Yourself Tips & Helpful Hints Here are some tricks of the trade we have discovered that will save you a lot of time and energy, depending on the type of project, and what resources you have available to you. Mechanical Tire Pounding What a time saver! Native Clean Energy Native Clean Energy (NCE) has been investing money, energy and time into researching new energy technologies as it relates to increasing the efficiency of our planet’s current Fossil Fuel based transportation and power production capacities. We are also delving deep into the research and development of what Nikola Tesla, Viktor Schauberger, John Keely, Gabriel Kron, Nathan Stubblefield, Ed Leedskalnin, Buckminster Fuller and many others were in search of, zero point energy, radiant energy, etheric energy, how to tap into the underlying unified field that holds everything together, the energy that spins our earth, the perpetual energy of the Moon pulling on our planets waters. There are many energies acting up on our Planet that we have yet to fully understand. We have traveled all across North America in our search to find and develop the cleanest source of sustainable/renewable energy on the planet. We have been successful on our search and have made some fantastic partnerships.