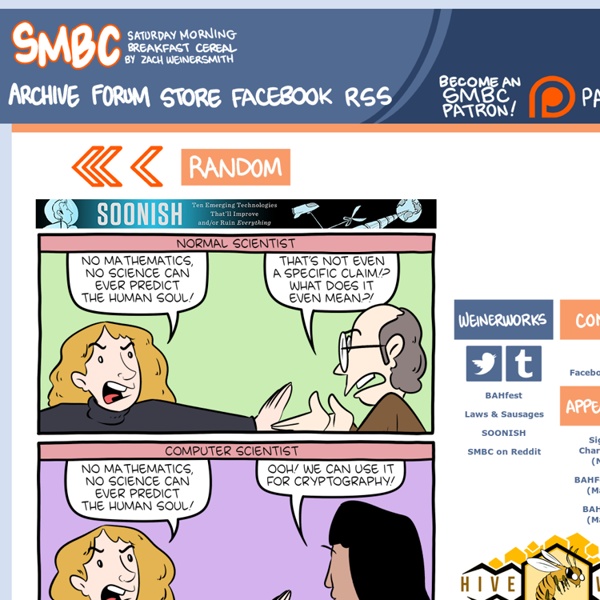 What a great guy July 8, 2014 It's that time of year again! Volume 6 is up for pre-order! throwing a banana cream pie in the face of technology. The Joy of Tech is a comic about technology and pop culture, created by Nitrozac and Snaggy, and updated three times a week. We like to feature the people and events that are making today's tech and pop culture news. We've been making comics on the web since early 1999, starting off with After Y2K, and then The Joy of Tech, which is now in its whoa... 17th year! You can follow us on Google+ at +Nitrozac JoT and +Snaggy JoT and +JoyofTech We currently live on Vancouver Island, Canada, where we have a lovely perspective of the silicon valleys to the south. We make The Joy of Tech using Apple computers, mostly on a MacBook Pro and iMac, running Mac OS X.

SUBNORMALITY! All content copyright Winston Rowntree, 2015. Museum previously seen here and then here. Why Nerds are Unpopular February 2003 When we were in junior high school, my friend Rich and I made a map of the school lunch tables according to popularity. This was easy to do, because kids only ate lunch with others of about the same popularity. We graded them from A to E. A tables were full of football players and cheerleaders and so on. zac gorman › a blog which herein contains the artstuffs of aforementioned person. Seemed like an appropriate day to finally stop being lazy and get my I Draw Nintendo tumblr going. Unlike the TMNT one that I did a while back, this will be a lot of other art aside from just prints that I’ll be selling (although expect a lot of that stuff also down the line). idrawnintendo.tumblr.com Read More Because I have no problem pandering, and people liked the other Zelda comic I did. Read More

Magical Game Time Magical Game Time Vol.1 is now AVAILABLE! MY BOOK IS FINALLY OUT!!! A collection of every strip from the beginning of Magical Game Time until about a month or two ago, this collection is seriously amazing! 144 pages of pure magic, including comics, sketches, poster designs, the whole deal! SmarterEveryDay Twitter SmarterEveryDay Loading... On “Geek” Versus “Nerd” To many people, “geek” and “nerd” are synonyms, but in fact they are a little different. Consider the phrase “sports geek” — an occasional substitute for “jock” and perhaps the arch-rival of a “nerd” in high-school folklore. If “geek” and “nerd” are synonyms, then “sports geek” might be an oxymoron. (Furthermore, “sports nerd” either doesn’t compute or means something else.) In my mind, “geek” and “nerd” are related, but capture different dimensions of an intense dedication to a subject:

The Origin of the Nerd Introduction In the little more than a decade since I created my original web page here about the origin of the word nerd, it has grown considerably, in part due to various controversies about the word's origins as well as to new information and speculation about its history. My views on the term's origin have not changed much, as you can see by the fact that Dr. Seuss's Nerd has joined me in the page's icon (assuming that you're not viewing the page in the "Full Width" style), but it does seem like time to reorganize the material. The factor that made me decide that nerd might be a label worth reclaiming was its early association with Dr.

100 word wednesday: wise words… Wisdom is hard to find. Truly. Just ask me. Simon & Garfunkel & Me A great day in the park Do you remember where you were on September 19, 1981? I sure do. To this day, I can close my eyes and feel the damp late-summer air, smell the wet grass and the weed, and feel the joyously communal vibe of the 500,000 people who surrounded me that day. To back up just a little bit, let's remember that September '81 was only nine months removed from the day John Lennon had been murdered outside the Dakota. I had spent three full years of my childhood hoping every single day that the Beatles would get back together, and now it was never, ever going to happen.

Form in Paul Simon's music Abstract: Songwriter and performer Paul Simon has been actively creating music for over five decades. While he has embraced elements of a variety of musical styles, at least one element has remained constant—his attention to formal construction as an important part of his songs' aesthetic quality, as evidenced in the songs themselves. This dissertation examines form in Simon's music throughout his career, finding that while most of the songs are based on well-known formal types, his clever manipulation of numerous musical elements imbues them with freshness, particularly in the most recent material. Chapter 1 provides an overview of Simon's life and career, considers his critical and peer acclaim, and examines some of his own words concerning the study of music theory. In Chapter 2, I provide a scholarly context for the dissertation, by reviewing popular music scholarship generally, and approaches to form in particular.