Toward a Future Beyond Employment - Mehmet Cangul. We live in an age when technological innovations streamline efficiency and begin to replace the need for human labor. 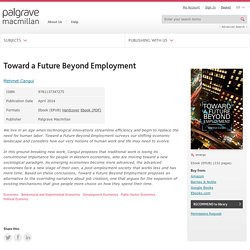 Toward a Future Beyond Employment surveys our shifting economic landscape and considers how our very notions of human work and life may need to evolve. In this ground-breaking new work, Cangul proposes that traditional work is losing its conventional importance for people in Western economies, who are moving toward a new sociological paradigm. As emerging economies become more advanced, the advanced economies face a new stage of their own, a post-employment society that works less and has more time. Based on these conclusions, Toward a Future Beyond Employment proposes an alternative to the overriding narrative about job creation, one that argues for the expansion of existing mechanisms that give people more choice on how they spend their time. 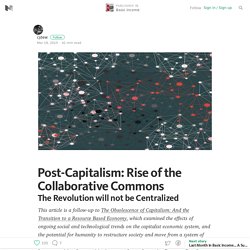 Hundreds of billions of consumer products will eventually be connected to the internet and to one another, feeding real-time data to an integrated global neural network. The Growing Precariat: Why We Need a Universal Basic Income. There is an adage in economics known as ‘the lump of labor fallacy’. 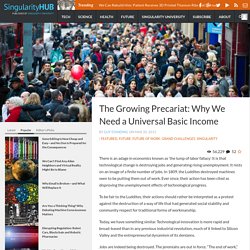 It is that technological change is destroying jobs and generating rising unemployment. It rests on an image of a finite number of jobs. In 1809, the Luddites destroyed machines seen to be putting them out of work. Ever since, their action has been cited as disproving the unemployment effects of technological progress. To be fair to the Luddites, their actions should rather be interpreted as a protest against the destruction of a way of life that had generated social stability and community respect for traditional forms of workmanship. Today, we have something similar. Jobs are indeed being destroyed.

This is nonsense. This is not a time for smug libertarian mantras about meritocracy and the bracing effects of competitiveness. The reality is that the income distribution system of the 20th century has broken down, and it will not come back. Do not think they will be underemployed in the conventional sense. The Growing Precariat: Why We Need a Universal Basic Income. How Bitcoin Could Make Distributing a Universal Basic Income Actually Possible. In today’s political climate, you might laugh at the idea of doling out basic income to everyone on Earth. 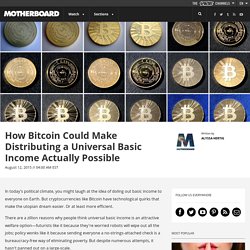 But cryptocurrencies like Bitcoin have technological quirks that make the utopian dream easier. Or at least more efficient. How Bitcoin Could Make Distributing a Universal Basic Income Actually Possible. More Dutch Cities Want to Give Their Residents a Basic Income. Everything You Think You Know About The History and Future of Jobs Is Likely Wrong. Why Should We Support the Idea of an Unconditional Basic Income? — Working Life. What would you do? 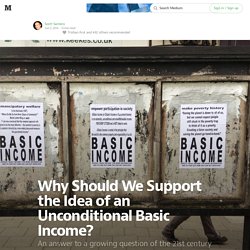 So what exactly would you do, if you were guaranteed $1,000 per month for the rest of your life? And yes, that’s around what the amount would most likely be here in the United States, at least at first. Switzerland’s Proposal to Pay People for Being Alive. This fall, a truck dumped eight million coins outside the Parliament building in Bern, one for every Swiss citizen. 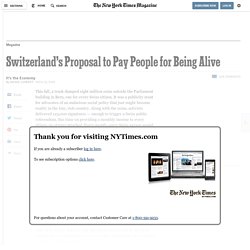 It was a publicity stunt for advocates of an audacious social policy that just might become reality in the tiny, rich country. A government-guaranteed basic income: The cheque is in the mail. WHAT if America were to scrap all its anti-poverty programmes—welfare, food stamps, unemployment benefits, the works—and replace them with an unconditional basic income (UBI) for everybody? 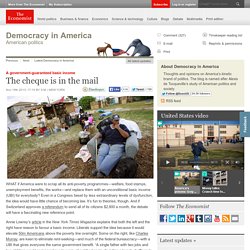 Even in a Congress beset by less extraordinary levels of dysfunction, the idea would have little chance of becoming law. It’s fun to theorise, though. And if Switzerland approves a referendum to send all of its citizens $2,800 a month, the debate will have a fascinating new reference point. Annie Lowrey’s article in the New York Times Magazine explains that both the left and the right have reason to favour a basic income. Liberals support the idea because it would elevate 50m Americans above the poverty line overnight. Universal Basic Income: Imagine never worrying about money. Delve. Untitled. Posted Aug. 24, 2015, at 7:05 a.m. 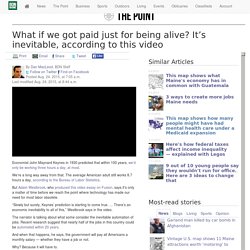 Last modified Aug. 24, 2015, at 8:44 a.m. Economist John Maynard Keynes in 1930 predicted that within 100 years, we’d only be working three hours a day, at most. We’re a long way away from that. The average American adult still works 8.7 hours a day, according to the Bureau of Labor Statistics. But Adam Westbrook, who produced this video essay on Fusion, says it’s only a matter of time before we reach the point where technology has made our need for most labor obsolete. “Slowly but surely, Keynes’ prediction is starting to come true. … There’s an economic inevitability to all of this,” Westbrook says in the video.

The narrator is talking about what some consider the inevitable automation of jobs. And when that happens, he says, the government will pay all Americans a monthly salary — whether they have a job or not. Why? 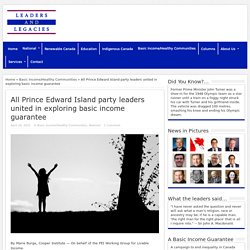 It is welcome news that the next Premier of Prince Edward Island is committed to exploring a Basic Income Guarantee (BIG) program for Island citizens. It is understood that this will be in the form of a demonstration project of at least five-to-seven years. During the Leaders’ Forum on Women’s Issues held April 14, 2015, at Holland College, each one of the party leaders endorsed a Basic Income Guarantee program as a poverty reduction strategy. Members of the PEI Working Group for Livable Income (WGLI), a community group actively promoting BIG, were extremely pleased to hear the four party leaders state their commitment to BIG. Whichever party forms the next government after May 4, there is no doubt that they will be exploring BIG as a long-term program to eliminate poverty in PEI. 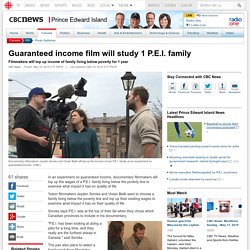 Yukon filmmakers Jayden Soroka and Vivian Belik want to choose a family living below the poverty line and top up their existing wages to examine what impact it has on their quality of life. Soroka says P.E.I. was at the top of their list when they chose which Canadian provinces to include in his documentary, Vivian Belik and Jayden Soroko say P.E.I. estimate it will cost as much as $60,000 to top up wages for four Canadian families for a year. (CBC) "P.E.I. has been looking at doing a pilot for a long time, and they really are the furthest ahead in Canada," said Soroka. UBI - Beautifully, disarmingly simple idea, by Prof. Philippe van Parijs. Guy Standing "The Precariat: The New Dangerous Class" at MA Talks - Copenhagen 26th of March 2015. UBIE Conference: Guy Standing on the emancipatory aspect of basic income. Piloting Basic Income in India: A Transformative Policy? By Guy Standing.

Channeling Paul Lafargue. Many summers ago, just freed from the enforced boredom of high school, I signed up for a course on Marxist economics. Andy, the teen I worked with, asked if I would accompany him. I envied him his dad, a transplanted Marxist Scotsman, and I relished the transgression I was invited to undertake, especially as a recent apostate from Catholicism. The class was held at the Proletarian Party (PP) headquarters in a shabby, multi-story building in Chicago’s Loop. I realized as soon as we entered their small office and saw at the other end of the room “Lecture Hall” inscribed in gold leaf on a frosted glass door that this was a bizarre escapade.

We were greeted by a small clutch of men and invited to enter the Lecture Hall, which was as narrow as the office we had passed through. The lecture was one of a series on Marx’s own lectures published posthumously as “Value, Price and Profit”. “The proletariat is dead! The Charter. 245-BIEN2014_Gajewska.pdf. Basic_income_programs_and_pilots_february_3_2014.pdf. European Citizens' Initiative for an Unconditional Basic Income. Mincome Documentary Being Filmed - 730 CKDM. BITNATION: Basic income application set for BitNation.

Credit to: #Decentralized Applications BitNation is a Decentralized Autonomous Organization (DAO), offering governance services of several kinds, such as law related bureaucracies, insurance and social services (education). It is based on a programming element called Blockchain, requires no human involvement and obeys to a set of incorruptible interaction rules. Every code line is open-source and even the rules are publicly auditable. Bitnation 2.0 aims at decentralizing, abolishing national borders and offering every governance act, which each person can voluntarily purchase, while keeping everything transparent and auditable. Credit to: BitNation BitNation 2.0 is now being upgraded with a new functionality: Basicincome.co. Basicincome.co - Evolve. Exploiting digital workers through global crowdsourcing.

Sub-title: Using contract or piece workers instead of employees Picture: Gains made more than a century ago by unionized workers are being wiped out in the Internet age, Grafstein Lecturer says (photo courtesy The Kheel Center for Labor-Management Documentation and Archives via Flickr) "Crowdsourcing industries are wiping away over 100 years of labour struggles overnight,” Professor Trebor Scholz told his audience during the 2014 Grafstein Lecture in Communications. Scholz, an associate professor of culture and media at the Eugene Lang College of the New School in New York, spoke at the University of Toronto's Faculty of Law March 6 to discuss the millions of “invisible” workers across the globe who earn their living from crowdsourcing websites. What About Just Guaranteeing Everyone a Basic Income? Doing so for all Canadians could almost erase poverty, or dry up labour sources, depending on whom you ask. 'People like working' even when guaranteed a base income for no work, but will they work enough?

Asks Krishna Pendakur, an SFU economist who focuses on anti-poverty measures. British Columbia's lowest-paid workers finally got a raise last spring, with the first increase to the province's minimum wage in 11 years. But even with that hike, full-time workers earning B.C.'s minimum wage of $10.25 an hour don't take home enough to meet Statistics Canada's equivalent of a poverty line for families. Guaranteed Annual Income Links - Canadian Social Research Links. Updated March 27, 2015 Page révisée le 27 mars 2015 [ Go to Canadian Social Research Links Home Page ] From Robert Rainer (Basic Income Canada Network): March 27, 2015 Thanks to Toni Pickard, in Kingston, for alerting me to this TEDx talk [ ] about "deep learning" by computers and some powerful implications of this technology.

Near the end of his talk, Jeremy Howard illustrates how automation is leading to a growing and massive gap between productivity and median income. The Conservative Case for a Guaranteed Basic Income. Politics Creating a wage floor is an effective way to fight poverty—and it would reduce government spending and intrusion. Please consider disabling it for our site, or supporting our work in one of these ways Subscribe Now > Basic income. Namibian Basic Income Pioneer Appointed as Head of Ministry for Poverty Alleviation. Bishop Dr Zephania Kameeta (Evangelical Lutheran Church in the Republic of Namibia) brings a response to the keynote address during the opening day session of the LWF Council 2011 meeting. Session1_Forstater.pdf.