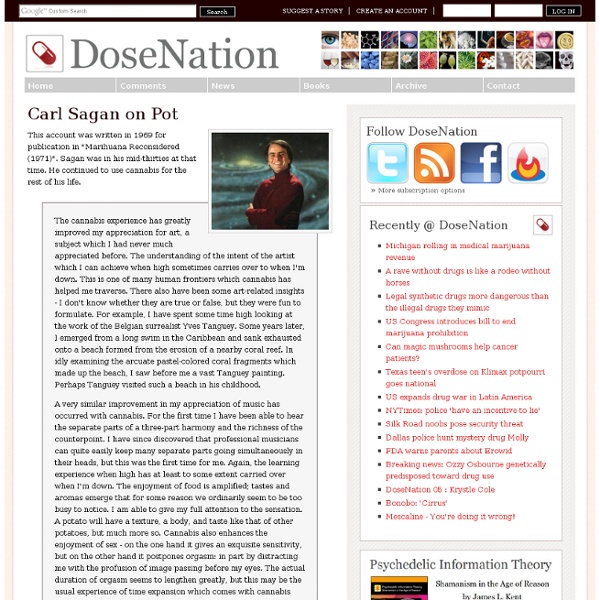 This account was written in 1969 for publication in "Marihuana Reconsidered (1971)". Sagan was in his mid-thirties at that time. He continued to use cannabis for the rest of his life. The cannabis experience has greatly improved my appreciation for art, a subject which I had never much appreciated before. Thanks Josh!

Neuro Evolving Robotic Operatives Neuro-Evolving Robotic Operatives, or NERO for short, is a unique computer game that lets you play with adapting intelligent agents hands-on. Evolve your own robot army by tuning their artificial brains for challenging tasks, then pit them against your friends' teams in online competitions! New features in NERO 2.0 include an interactive game mode called territory capture, as well as a new user interface and more extensive training tools. NERO is a result of an academic research project in artificial intelligence, based on the rtNEAT algorithm. It is also a platform for future research on intelligent agent technology. The NERO project is run by the Neural Networks Group of the Department of Computer Sciences at the University of Texas at Austin . Currently, we are developing an open source successor to NERO , OpenNERO , a game platform for AI research and education.

skypilotclub home page Seven Things You Didn't Know About Medical Marijuana Get Topic Updates Share Slideshow Written by Emily Lapkin and Medically Reviewed by Scott Pearlman, M.D. 1. Think you know it all about medical marijuana? Advertisement Daily Travel Photo – Solomon Islands | Everything Everywhere: Ar Old Port, Rennell Island, Solomon Island This is the old “port” on the island of Rennell where the boats used to land to bring supplies to the island. It is really nothing more than a beach near an opening in the reef. Getting to the beach is about a 300 foot climb down very steep steps. When I asked to go down to the old port they thought I was weird, but agreed to take me. People have a fantasy about desolate, pristine beaches.

Fab at Home, Open-Source 3D Printer, Lets Users Make Anything October 1, 2007 12:00 AM Click here to post this video on your blog or website. Click here to post a photo of this winner on your blog or website. Hod Lipson didn't set out to revolutionize manufacturing. He just wanted to design a really cool robot, one that could "evolve" by reprogramming itself and would also produce its own hardware--a software brain, if you will, with the ability to create a body. To do this, Lipson (below, center) needed a rapid-prototyping fabrication, or "fabber." "To really let this robotic evolutionary process reach its full potential," says Lipson, a Cornell University computer and engineering faculty member, "we need a machine that can fabricate anything, not just complex geometry, but also wires and motors and sensors and actuators." A Fab at Home kit costs around $2400.

DIY Magic: The Ganzfeld Technique | ARTHUR MAGAZINE The Ganzfeld Technique or the Poor Man’s Sensory Deprivation Tank Tools required : 2 ping pong balls sharp scissors or knife headphones an am/fm radio or a suitable recording of white noise a drawing pad and pencil As a child I could spend many content hours studying the whorls and curlicues in the wood grain of my bedroom door. The arabesque patterns needed only the smallest prompting from my imagination to take on a fecund life of their own and blossom into a fantastic bestiary of mercurial faces and creatures, dragons, imps and gnomic animal heads, each knot of wood providing one eye. How easy it was to slip into the realm of pure imagination then; I practiced the art of daydreaming continuously in the classroom, grades k-8! The Ganzfeld effect is one of easiest, quickest, and simplest methods for scrying that I have ever come across. [Pareidolia: the art of seeing something where there is "nothing." You should look at certain walls stained with damp or at stones of uneven colour.

What Does It Mean When You Dream About Snakes? When you dream about snakes, chances are that the meaning of what you just dreamed about is related to challenging issues and feelings that you’re facing in your daily life. Related Ads To Inspire Dreams According to Freud’s classic dream interpretation theory, a snake featured in a dream represents a phallic symbol that could relate to a male figure, male energy or how you experience your sexuality. What Does it Mean to Dream about Snakes? To get start interpreting what dreaming about snakes means, here are the most common meanings associated with snakes in dreams: Generally, a snake featured in a dream means that you’re dealing with a difficult situation or unsettling emotions in your waking life. A snake can appear in your dreams as an animal spirit guide or animal totem, bringing guidance about life direction and healing opportunities. >> Get more information about the snake as a spirit animal (Source: www.spiritanimal.info) Dream Interpretation Tools The Snakes are unpredictable.

A molecular link between the active component of m... [Mol Pharm. 2006 Nov-Dec] - PubMed result English 50 Exercises for Story Writers English 50 – Intro to Creative Writing: Exercises for Story Writers Basic Theory: What is a short story? Short stories have a narrator; that is, someone tells the story; have at least one character in them; have some action occur (or perhaps fails to occur); take place somewhere; that is, there is a setting for the action; and someone either learns something or fails to learn something (theme).With these five characteristics in mind, we can create an almost endless supply of exercises to help sharpen our techniques of story telling. Narrative Voice Twenty or so years ago, voice was the "rite of passage" into a successful writing career. Nevertheless, a narrative voice that sounds like it could be anyone's voice or is bland and boring, or riddled with pointless clichés will fail to capture and hold the reader's attention. NOTE: It is quite common for writers in the early stages of their careers to imitate the writers they are reading or admire most. The T.S. Go back to the previous page?

Manufacturing the Deadhead: A Product of Social Engineering... by Joe Atwill and Jan Irvin Français: (This article in French) Download PDF in French: Introduction: In 2012 Jan Irvin made an important discovery. In the course of re-publishing The Sacred Mushroom and the Cross by the Dead Sea Scrolls scholar John Allegro,[1] Irvin had been researching the letters of one of Allegro’s most prominent critics, Gordon Wasson, at various university archives (including Princeton, Yale, Columbia, Dartmouth, and the Hoover Institute at Stanford) when he came across primary documents--letters actually written by Wasson--showing that he had worked with the CIA.[2] Though Gordon Wasson was both chairman for the Council on Foreign Relations and the Vice President of Public Relations for J.P. Irvin saw troubling implications in his discovery. In 1992 Terence McKenna published in his book Archaic Revival: 1. 1. 2. 3.