Interactive - National Film Board of Canada 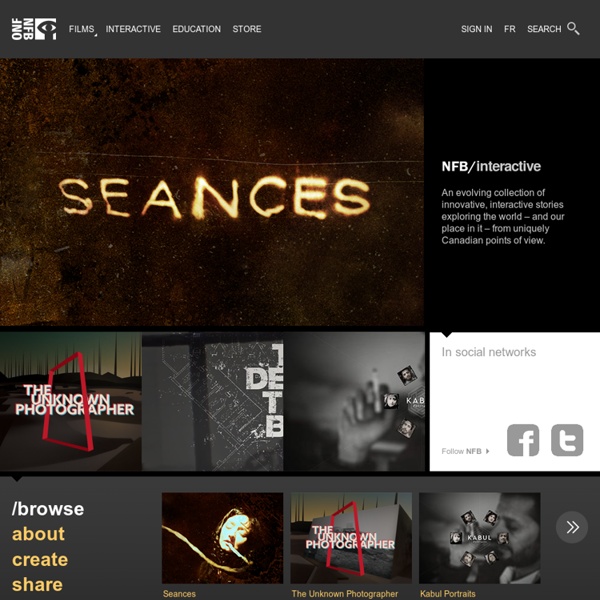 At the NFB we like change. For 70 years we've experimented, innovated, and produced a legacy of technical and creative firsts in cinema, animation, and documentary. Think McLaren, Lipsett, Brittain, and Jutra; Stereoscopic 3d, VTR, and participatory media. Today, the way we create, consume, and connect with each other changes by the minute. And this evolving collection of stories reflects that reality. It's the result of artists and storytellers of all sorts utilizing new technology, to explore new forms of creation, for a new kind of Canada. The stories they're telling here are new, but share a lot in common with the work that came before: they present distinct voices, strong points-of-view, and unique perspectives. So let the conversation begin. Scary or otherwise. Related:  Journalism Inspiration

Green Honey Language represents our view of the world, and knowing its limits helps us understand how our perception works. I used the data from Wikipedia’s “Color” entry for different languages. My assumption was: "Different languages have different ways to describe color.” (Scroll Down to Start) The Chinese entry has 250+ different colors. The Hue-Saturation-Lightness (HSL) model is a 3D model that can be projected on a 2D space. Using Hue as an angle, we can set either Saturation as the radius . . . or Lightness as the radius. Here is the English Dataset, keeping Lightness as a constant . . . or keeping Saturation as the constant. Comparing the two datasets, you can see that English has a richer entry for color names. However, it's always worth asking: Is this the best model to represent our dataset? Notice that the Chinese and English names for colors share a common structure of "noun/adj + base color": Here are all the colors with 青 in their names. Now let's see English. association from object . . .

23 Amazing Single Page Websites When a website doesn’t call for a lot of content, it might be a good idea to go with the single page approach – where all of the content lives on the home page and the navigation, in most cases, allows the user to jump from one section to another. In the past few years, we’ve seen a steady increase in popularity of these types of sites, mainly partly because the use of jQuery can make for some nifty transitions and effects. For you’re inspiration, we gathered some really nice examples of websites that use only one page to show all their content. From minimalist layouts to colorful ones, from plain and simple menu navigations to parallax scrolling, you will find plenty here to inspire you. Take some time and check them all out, and let us know which one is your favorite. Rodesk House iamcreative.me Valentine Favre wit creative Pipe Digital dj Xeeder Valerie Matt Brothers Grind – Work Liquid Revolver Design Studio Design Embraced Free Range Jeremy Mansfield Demi Creative dangers of fracking Launch Factory

Interactive Narratives - The Best in Multimedia Storytelling and Multimedia Journalism Dialysis Facility Tracker By Robin Fields, Al Shaw, and Jennifer LaFleur, ProPublica, Updated October 4, 2013 This site is for dialysis patients and others who want to learn about the quality of care at individual dialysis clinics. Among other things, you can learn how often patients treated at a facility have been hospitalized, report certain types of infections or are placed on the transplant list. The information is submitted by facilities and collected by contractors of the Centers for Medicare and Medicaid Services, the federal agency that oversees most dialysis care. Related story: Dialysis Data, Once Confidential, Shines Light on Clinic Disparities »

2010 Census: Children less than five years old in Chicagoland By Chris Groskopf and Brian Boyer Aug. 7, 2011 This map shows the distribution of children less than five years old in Cook, Lake, Kane, McHenry, Kankakee, Kendall and DuPage counties as reported by the 2010 U.S. Census. Each dot represents a single child Read the story:New U.S. census numbers herald a greater Latino presence in the Chicago area Move your mouse over the map for details. *What do these numbers mean? This map shows one dot for each child less than five years old as reported in the 2010 U.S. NewsBios | Home of the World's Most Influential Journalists Look At This : NPR I’m Wes Lindamood, an interaction designer on the NPR Visuals team. I’ll be joining you here on Look At This from time to time to explore design, technology and (I hope) some interesting stories about how we see the world. Today’s rabbit hole: Faces in things. "Ooh - I think I hear the recycling truck!"— @FacesPics A funny photo showed up in my Twitter feed a few weeks ago, and it was the most delightful thing I saw all day. This reminded me of the work of Seoul-based art collective Shinseungback Kimyonghun. In Cloud Face, they point their cameras to the sky to do some cloud watching. Thanks to Mozilla developer Heather Arthur, facial recognition also exists for cats. that these humans look like cats … and that these cats look like humans: (Photos via Shinseungback Kimyonghun) While I don’t find the results of their project particularly compelling, I am fascinated by these false positives, and the unique perspective of algorithmic vision. Where’s the cat in this photo?

Chinese Proverbs for the Mind Oops! Forgot to update. Nic’s store is on sale for a few days! I saw the “你和, 我六十九/ touch one’s heart, never be apart” proverb on there. Perfect for upcoming Valentine’s Day, methinks. ( ˘ ³˘)♥ I love you. ヽ(愛´∀｀愛)ノ You’re welcome! 哈哈哈，这个blog真的让我笑死了！ N’aww thanks! Oh snap! It’s no problem! Acknowledge your mistakes and be ready to apologize! Museum of Fine Arts in Boston opens new Art of the Americas Wing Exterior improvements continue at the museum — part of its ongoing efforts to embrace the Frederick Law Olmsted-designed Back Bay Fens, surround the building with greenery, and in so doing, help to rejuvenate the museum's neighborhood. 9 Web Design Trends Set To Boom in 2014 | Web Designer Hub Share on Twitter12Share on Facebook8Share on Google Plus2Share on Stumbleupon0Share on Reddit0 As we are now a month into 2014 we are starting to see some new trends emerging, some old fads evolving into fully blown mainstream design standards and some design fads dying a slow death. There are some significant changes taking hold in the web design world that I believe will take off this year and stay for years to come. It is notoriously hard to predict the next big trend or what will just be a passing fad but I am going to have a go and hopefully give you a heads up on growth areas that will bring in more clients and improve your hourly rate over the coming year. Scrolling Effects Go Mainstream We started to see the influx of heavy scroll sites in 2013, but this year the trend is going to continue in line with the fact that are using more mobile devices which naturally lend themselves to scrolling vertically. A Simple Parallax Scrolling Technique 10 Parallax Scrolling Tutorials

Ian James Cox - Freelance Web Designer Manchester Columbia Visuals | Deconstructing Images Award-Winning Newspaper Designs Advertisement Print and Web are different. Traditional layout techniques from print, particularly an advanced formatting, aren’t applicable to the Web as CSS doesn’t offer sophisticated instruments to design such layouts (e.g. text floating around an embedded image; some “floating” techniques provide such results, however they produce bloated source code just as well). At the same time the flexibility of the Web is hardly applicable to print as there is no way to customize a traditional periodical for reader’s convenience. Apart from that, online-reading is very different from offline-reading: in the latter both leading and the line length are usually much shorter. However, there are a number of fundamental principles which are often being used in both media. Please notice that you might want to take a look at the article Data Visualization and Infographics3 we’ve presented previously,all images are clickable and lead to the sources from which they’ve been taken. Äripäev (Tallinn, Estonia)