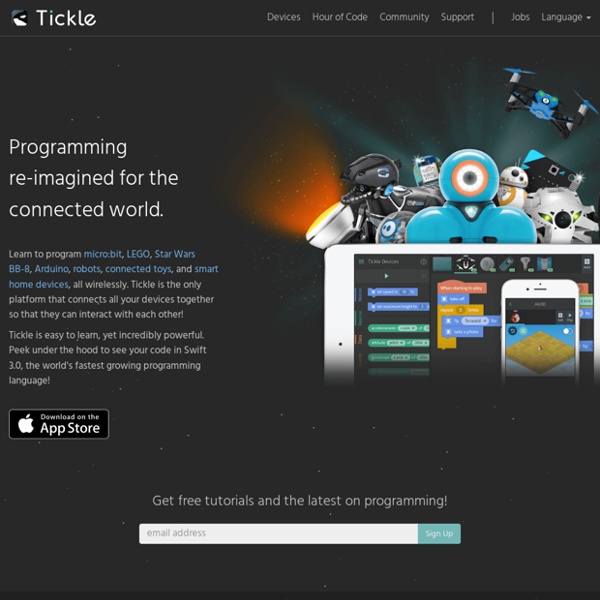 5 Apps for Creating Digital Portfolios on iPads As the end of the school year nears you may find yourself asking students to create collections of examples of their best work of the year. There are a lot of ways that your students could go about accomplishing that task. Here are five free apps that can be used for the purpose of creating a digital portfolio. Seesaw is a free iPad app through which students can create a portfolio to document the things they have learned. Students can add artifacts to their portfolios by taking pictures of their work (in the case of a worksheet or other physical item), by writing about what they’ve learned, or by shooting a short video to record something they have learned. Students can add voice comments to their pictures to clarify what their pictures document.

The US government has begun trialling methods to disable and track commercial drones The US government is conducting tests into ways to disable and track drones that may infiltrate sensitive sites. Although the research, which is being contributed to by various government agencies and state law enforcement, is in its early stages, there has been at least one field test, according to Reuters. A source told the news agency that late last year, police in New York used a microwave-based system to try to track a commercially available drone in Times Square and send it back to its operator. The test, which previously went unreported, was set back by signal interference from nearby media broadcasts, and apparently involved representatives from the Department of Homeland Security, the Federal Aviation Administration (FAA) and the Defence Department A security scare was prompted in Tokyo after a small drone was found landed on the roof of the Japanese Prime Minister's official residence

How to change ListView selected item background color in Android Tuesday, August 11, 2015 How to change ListView selected item background color in Android activity_main.xml MainActivity.java More android examples Newer PostOlder PostHome Office Lens - Digitize Handwritten Notes and Diagrams Office Lens is a new app for iOS and Android (still in limited beta) designed for converting pictures of notes on whiteboards and paper into notes that can be edited in Microsoft Word or PowerPoint. If you don't need to edit the notes that your take pictures of, you can simply export the file created by Office Lens to JPEG or PDF. Probably the neatest aspect of Office Lens is that hand-drawn images and figures captured through the app can be separated from the text to move and manipulate as individual objects in PowerPoint slides. See the video below for an overview of Office Lens. Applications for EducationOffice Lens could be a great app for students to use to snap a picture of something on a whiteboard then add their own comments to it in a Word Document.

Life as a drone operator: 'Ever step on ants and never give it another thought?' When Michael Haas, a former senior airman with the US air force, looks back on the missions he flew over Afghanistan and other conflict zones in a six-year career operating military drones, one of the things he remembers most vividly is the colorful language airmen would use to describe their targets. A team of three would be sitting, he recalls, in a ground control station in Creech air force base outside Las Vegas, staring at computer screens on to which images would be beamed back from high-powered sensors on Predator drones thousands of miles away. The aim of the missions was to track, and when the conditions were deemed right, kill suspected insurgents. That’s not how they put it, though. They would talk about “cutting the grass before it grows out of control”, or “pulling the weeds before they overrun the lawn”. And then there were the children.

Use Android Studio to stub web API; simple JWT login as an example When documenting API or stubbing end-points for web API, Apiary has been the go-to solution for a while. However, there are times when you need to returns results based on users input and then, we very quickly hit up against the limitations of Apiary. While most developers are comfortable with using Tomcat, Apache and Nginx with a back-end language, there is some overhead to downloading the new tools and setting up a new environment. 10 incredible iPad apps for education SimpleMind There’s no shortage of note-taking apps for the iPad, so when it comes to searching and finding the gems through the rubble, it can be quite gruelling. Thankfully, SimpleMind is an app that stands out for its ease of use and simplicity. We all need an app which we can open and use within seconds and that’s where this app comes into play – it’s clean, concise and no-nonsense. ➤ SimpleMind: Free version, Paid version Price: Free / $6.99

A Visual Glossary Click any arrow to enter a rabbit hole. Each serves as a back door into one of our stories. Birds Python Design Patterns Guide Let’s say it again: Python is a high-level programming language with dynamic typing and dynamic binding. I would describe it as a powerful, high-level dynamic language. Many developers are in love with Python because of its clear syntax, well structured modules and packages, and for its enormous flexibility and range of modern features. In Python, nothing obliges you to write classes and instantiate objects from them.

5 Free iPad Apps for Drawing and Sketching Notes Parts of this post originally appeared on one of my other blogs, iPadApps4School.com Sometimes when students are taking notes, words don't do enough to fully capture an idea. In those cases, being able to quickly sketch an idea will enhance students' notes. Sketching notes on an iPad enables students to edit and share sketched notes more quickly and easily than ever before. Here is a handful of iPad apps (some freemium, some completely free) for sketchnoting. IdeaStorm is a free iPad app for quickly creating sketches and diagrams. Mapping out the drone market ecosystem After looking into both the VR and IoT space, I wanted to dig in and understand the drone ecosystem and how all of the various players fit together. Some caveats before we dive into the analysis. This ecosystem map is not designed to be 100% comprehensive. It’s more to understand all the different spaces within drones. I am biased towards startups in the space.

6 Good iPad Apps to Turn Pictures Into Cartoons and Comics November 23, 2014 I spent sometime this weekend curating and working on the list of iPad apps below. These are apps that students can use to create beautiful cartoons to use in their multimedia projects or in activities that involve comic strips, digital storytelling, presentations and many more. All of these apps are easy to use and do not require any advanced technical skill.