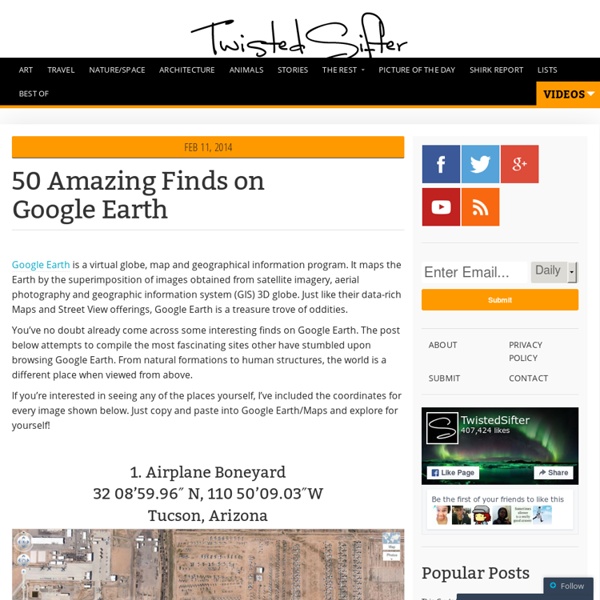 Google Earth is a virtual globe, map and geographical information program. It maps the Earth by the superimposition of images obtained from satellite imagery, aerial photography and geographic information system (GIS) 3D globe. Just like their data-rich Maps and Street View offerings, Google Earth is a treasure trove of oddities. You’ve no doubt already come across some interesting finds on Google Earth. The post below attempts to compile the most fascinating sites other have stumbled upon browsing Google Earth. From natural formations to human structures, the world is a different place when viewed from above. If you’re interested in seeing any of the places yourself, I’ve included the coordinates for every image shown below. 1. 2. *Update* This is a land art project called Desert Breath by the D.A.ST. 3. 4. 5. 6. 7. 8. 9. 10. Located in the fertile agricultural region of Argentina’s ‘Pampas’ is a guitar-shaped forest made up of over 7,000 cypress and eucalyptus trees. 11. 12. 13. 14. Related:  Nature

Ukraine crisis in maps 23 April 2014Last updated at 08:39 ET A masked pro-Russian gunman in Sloviansk, eastern Ukraine on 23 April Deadly pro-Russian unrest in eastern Ukraine has created a crisis for the new authorities in Kiev, months after President Viktor Yanukovych was driven out of office. After imposing economic sanctions on Russia over its annexation of the Ukrainian region of Crimea in March, the US and EU are at loggerheads again with Moscow despite diplomatic efforts in Geneva. The crisis has exposed deep divisions in Ukrainian society - between the European-facing west and the Russian-facing east. Explore the maps and graphics below to find out more. Why is the eastern Ukraine crisis dangerous? Pro-Russian sentiment is strong in regions like Donetsk and Luhansk, Ukraine's industrial heartland and vital to the country's economy, but the population is much more divided in its loyalties to Moscow or Kiev than people were in Crimea. High stakes in the east Crisis timeline Why is Crimea so important?

29 Surreal Places In America You Need To Visit Before You Die 40 more maps that explain the world Maps seemed to be everywhere in 2013, a trend I like to think we encouraged along with August's 40 maps that explain the world. Maps can be a remarkably powerful tool for understanding the world and how it works, but they show only what you ask them to. You might consider this, then, a collection of maps meant to inspire your inner map nerd. 1. Data source: Oak Ridge National Laboratory, World Bank. Those dots represent people: the brighter the dot, the more people. 2. Click to enlarge. Human beings first left Africa about 60,000 years ago in a series of waves that peopled the globe. 3. (Wikimedia commons) The Mongol conquests are difficult to fathom. 4. Click to enlarge. This map shows the Spanish and Portuguese empires at their height. 5. This map shows British, Dutch and Spanish shipping routes from 1750 to 1800. 6. Click to enlarge. 7. Bluer countries have better income equality. Yes, the United States has worse income inequality than Nigeria. 8. Click to enlarge. 9. 10. 11. 12.

Spend a New Years Eve in Vienna | Austria Tourism Vienna is one of the most famous cities when it comes to New Years eve, street Christmas decoration and holiday spirit in general. The beautiful lighting, outstanding decoration and marvelous ornaments placed all around the town will provide you with time of your life and make Vienna tourism adventure one of the best things in your life. In just few days, the city of Vienna has prepared numerous activities for both Christmas and New years eve all across the town. In case you are planning to visit Vienna or Austria in the following days, feel free to contact us and we’ll let you know where you can find the best party and suggest the places to catch the magic and awesome midnight fireworks…

How do you stop flooding? 29 January 2014Last updated at 05:15 ET With parts of the UK continuing to suffer the aftermath of the most severe winter floods in years, attention has focused on how flooding can be prevented or alleviated. Here are some of the main methods and principles in use. The Somerset Levels have been flooded for several weeks Dredging Farmers in Somerset claim a lack of river dredging has worsened the impact of the flooding in the area in recent weeks. But the issue of whether rivers should be dredged is not clear cut. The Environment Agency says that while dredging can improve general land drainage, it cannot prevent rivers from flooding, due to the huge volumes of water involved during major floods. The basic aim of dredging is to remove silt - a sedimentary material made of fine sand, clay and small-sized particles of rock - from the river's bed, therefore increasing its capacity to carry water downstream. Flood barriers Metal frame barriers in use at Bewdley in Worcestershire Sustainable drainage

History in photos. - Album on Imgur UK storms: Before and after 7 January 2014Last updated at 08:59 ET Stormy weather has wreaked havoc across the UK. A combination of high winds, rain and strong waves have battered the coastline and also caused flooding further inland. Here, a landmark rock arch in Porthcothan Bay in Cornwall, has been reduced to rubble. In Portland, Dorset, a rock stack off the coast, known locally as Pom Pom rock, has been washed away. In Portreath, in Cornwall, a section of the finger pier and harbour wall has been damaged by the waves. Flooding in the Somerset Levels has left villages cut off and roads and buildings damaged. Aberystwyth promenade was evacuated again on Monday night as the coast was hit by an 'exceptional' wave swell.

Flickriver - A new way to view Flickr photos and more... The 1931 Histomap: The entire history of the world distilled into a single map/chart. The Vault is Slate's history blog. Like us on Facebook, follow us on Twitter @slatevault, and find us on Tumblr. Find out more about what this space is all about here. This “Histomap,” created by John B. This giant, ambitious chart fit neatly with a trend in nonfiction book publishing of the 1920s and 1930s: the “outline,” in which large subjects (the history of the world! The 5-foot-long Histomap was sold for $1 and folded into a green cover, which featured endorsements from historians and reviewers. the actual picture of the march of civilization, from the mud huts of the ancients thru the monarchistic glamour of the middle ages to the living panorama of life in present day America. The chart emphasizes domination, using color to show how the power of various “peoples” (a quasi-racial understanding of the nature of human groups, quite popular at the time) evolved throughout history. It’s unclear what the width of the colored streams is meant to indicate.

40 maps that explain the world By Max Fisher By Max Fisher August 12, 2013 Maps can be a remarkably powerful tool for understanding the world and how it works, but they show only what you ask them to. So when we saw a post sweeping the Web titled "40 maps they didn't teach you in school," one of which happens to be a WorldViews original, I thought we might be able to contribute our own collection. Some of these are pretty nerdy, but I think they're no less fascinating and easily understandable. A majority are original to this blog, with others from a variety of sources. [Additional read: How Ukraine became Ukraine and 40 more maps that explain the world] Click to enlarge. Massive 16th Century Sculpture of a Guardian Colossus Shrouded within the park of Villa Demidoff (just north of Florence, Italy), there sits a gigantic 16th century sculpture known as Colosso dell'Appennino, or the Appennine Colossus. The brooding structure was first erected in 1580 by Italian sculptor Giambologna. Like a guardian of the pond in front of him, the giant is in an endless watchful pose, perched atop his earthy seat. At one point, the colossal figure stood amidst a number of other bronze statues, many of which have now gone lost or stolen. The massive brick and stone structure withstood centuries in the same spot, managing to maintain its figurative composition in all that time. The park that the colossus is situated in, once built as an estate for the mistress of an Italian duke, serves as the perfect setting for the gentle giant. Top image via Unusual Places. Image by SamuDP Image by SamuDP Image via Provincia di Firenze Image via Provincia di Firenze Image by lapsy Image by lapsy Image by lazysoul Image by Raymundo Jiménez