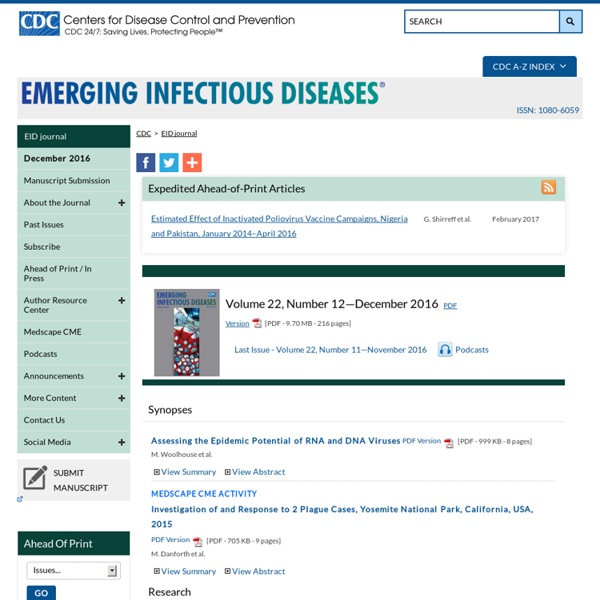 Heartland virus (HRTV) is a recently described phlebovirus initially isolated in 2009 from 2 humans who had leukopenia and thrombocytopenia. Serologic assessment of domestic and wild animal populations near the residence of 1 of these persons showed high exposure rates to raccoons, white-tailed deer, and horses. To our knowledge, no laboratory-based assessments of viremic potential of animals infected with HRTV have been performed. We experimentally inoculated several vertebrates (raccoons, goats, chickens, rabbits, hamsters, C57BL/6 mice, and interferon-α/β/γ receptor–deficient [Ag129]) mice with this virus. All animals showed immune responses against HRTV after primary or secondary exposure. However, neutralizing antibody responses were limited.

BMC Public Health (2003) 3:39, December 09, 2003 Risk factors for antibiotic resistance in Campylobacter spp. isolated from raw For sampling, 122 retail stores throughout Switzerland and Liechtenstein were randomly selected. From March until July 2002, food safety inspectors of the cantonal laboratories collected 415 samples of raw poultry meat (whole chickens as well as parts such as cutlet, meat cut into strips, legs, drumsticks, wings, and breast) from selected stores. Additionally, information about housing type of the poultry (as labelled), the country of origin (as labelled), refrigeration (chilled, frozen), and packing of the samples was recorded. Of each sample, 10 g was inoculated into 100 ml selective enrichment broth (Brucella broth (211088, Becton Dickinson, Sparks, USA) with Campylobacter growth and selective supplement (SR084E, SR069E, Oxoid, Basingstoke, Hampshire, UK)) and incubated at 42°C for 24 h under microaerobic conditions provided by commercial gas packs (CampyGen from Oxoid). • foreign production vs.

Archives of Virology (2009) 154:1589-1597, October 08, 2009 Genetic variation and pathogenicity of highly virulent porcine repro A highly pathogenic swine disease designated as ‘porcine high fever disease (PHFD)’ appeared recently in China. Porcine reproductive and respiratory syndrome virus (PRRSV) was identified as an agent associated with PHFD, and two discontiguous sequence deletions were identified as a genetic marker in the Nsp2 region of the viral genome. To examine PHFD in Shandong province, a total of 10 PRRSV isolates were recovered from pig herds that had never been vaccinated for PRRS. Veterinary Medicine and Public Health at CDC Lonnie J. King, DVM Office of the Director, National Center for Zoonotic, Vector-Borne, and Enteric Diseases (proposed) Corresponding author: Lonnie J. CDC EID MAI 2004 Causative Agent of Pogosta Disease Isolated from Blood and Skin Lesions Pogosta disease is a viral disease, established to be identical with other diseases, Karelian fever and Ockelbo disease.[2][3] The names are derived from the words Pogosta, Karelia and Ockelbo, respectively. The symptoms of the disease include usually rash, as well as mild fever and other flu-like symptoms; in most cases the symptoms last less than 5 days. However, in some cases, the patients develop a painful arthritis.

Liaison de texte You can use the Smart Text Reflow feature to add or remove pages when you’re typing or editing text. This feature is useful when you’re using InDesign as a text editor and you want a new page to be added whenever you type more text than can fit on the current page. It’s also useful in avoiding overset text or empty pages for situations in which the text flow changes due to editing text, showing or hiding conditional text, or making other changes to the text flow. By default, Smart Text Reflow is limited to master text frames — text frames that are on a master page. Rheumatology 2003; 42: 632-636 The prevalence of antibodies against Sindbis-related (Pogosta) virus in different parts of Finland + Author Affiliations Received January 24, 2002. Accepted September 4, 2002. Objective. To study the occurrence of Sindbis‐related (Pogosta) disease in Finland by serological means. Methods.

How to Create a Gantt Chart in Excel Make a Basic Gantt - Video Transcript Gantt Charts allows us to visualize and see how project tasks relate to each other and progress over time. There are a couple of ways to start a project with a Gantt view. You can open a project template, import an existing MS project, Google spreadsheet or Excel file, or start a new project sheet that is preset for Gantt viewing. We'll go ahead and open this Q4 Product Launch.