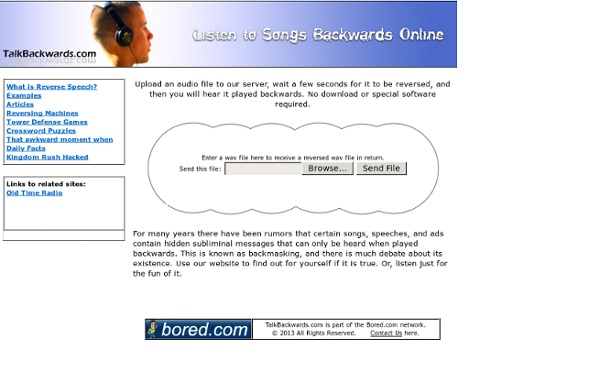 Ear Training WebSite Ghosts I've always got a kick how people will fall reverently silent and consider you blessed if you say you saw an angel or some "vision", but if you tell those same people you saw a ghost they'd tell you how full of it you were. Is there a difference? I sat in the library for 9 solid hours one day (heaven!), looking at every ghost book they had; "psychic photography", famous hauntings, the haunted; the stupid-ass "ectoplasm" photos of long-ago Mediums, badly faked portraits of spirit photography, the psychology and physiology behind those who claim demonic possession, EVP, infrared ghost photos, Near Death experiences. Maybe not. But - I know better. Hopefully I can share some of the latter here, but those debunking stories make good reading, too. Any good ghost stuff, Emaill me.

FREE Online Rhyming Dictionary the Anarchist Library Liberty - Mother, not Daughter of Order "If you love wealth more than liberty, the tranquility of servitude better than the animating contest of freedom, depart from us in peace. We ask not your counsel nor your arms. Crouch down and lick the hand that feeds you. May your chains rest lightly upon you and may posterity forget that you were our countrymen." Samuel Adams, (1722-1803) U.S. Anarchist Thinkers Mikhail Bakunin, a founding father of Anarchism. Miscellaneous Essays, Articles, etc. Review of the "Anarchist" Cookbook, raises doubts about this classic piece of disinformation. Short list of Anarchist Links - Large page of Anarchist Images - Return to Flag Home

Good Ear - Online Ear Training Site Tips for the Creation of Your Darkly Gothic Poem You're probably wondering how such anguished and artistic individuals pen such magnificently dark epics, where they got their expressive names, and how you can crank out the same self-pitying drivel, uh, create your own shadowed and unearthly opus. Read this list of handy tips for the proper creation of Darkly Gothic poems. Then choose an appropriate subject from the page of poems, and the Goth-O-MaticTM will help you express your inner angst! Choose an appropriate gothic moniker by which you wish to be addressed. Feel free to throw a couple of appropriately dark and wicked words together to form something mysterious with which to impress your nonpoetic friends. Adding a color to a predatory bird is still reasonably popular, as is naming yourself after one or two of the notable entities in Hell. Concepts such as darkness, loss, pain, grief, madness, death, night, and the bloodthirsty undead make good topics for Darkly Gothic poems. If you don't know Poe... Enough said. ...

argot .com : dictionary of street drug ( cannabis, marijuana, heroin, cocaine, et al. ) slang Gothic Clothing Store - Heavy Red truth: the Anti-drugwar The &quot;Dangers&quot; of Marijuana "The concern with marijuana is not born out of any culture-war mentality, but out of what the science tells us about the drug’s effects. And the science, though still evolving, is clear: marijuana use is harmful. It is associated with dependence, respiratory and mental illness, poor motor performance, and cognitive impairment, among other negative effects. We know that over 110,000 people who showed up voluntarily at treatment facilities in 2007 reported marijuana as their primary substance of abuse. Additionally, in 2008 marijuana was involved in 375,000 emergency visits nationwide. Several studies have shown that marijuana dependence is real and causes harm. Traveling the country, I’ve often heard from local treatment specialists that marijuana dependence is as a major problem at call-in centers offering help for people using drugs."

If America should go Communist Should America go communist as a result of the difficulties and problems that your capitalist social order is unable to solve, it will discover that communism, far from being an intolerable bureaucratic tyranny and individual regimentation, will be the means of greater individual liberty and shared abundance. At present most Americans regard communism solely in the light of the experience of the Soviet Union. They fear lest Sovietism in America would produce the same material result as it has brought for the culturally backward peoples of the Soviet Union. They fear lest communism should try to fit them to a bed of Procrustes, and they point to the bulwark of Anglo-Saxon conservatism as an insuperable obstacle even to possibly desirable reforms. They argue that Great Britain and Japan would undertake military intervention against the American soviets. They fear monetary inflation, bureaucratic tyranny and intolerable red tape in obtaining the necessities of life. Without compulsion!