How Companies Learn Your Secrets 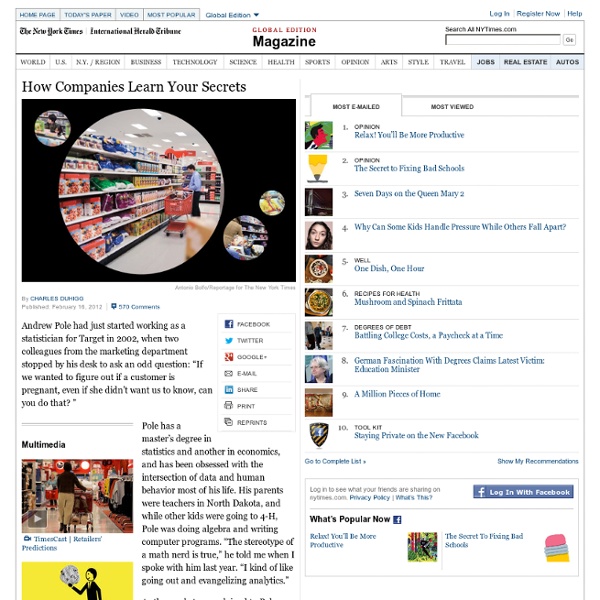 Google+: 9 surprising facts about the GROWING social network Brands, don’t abandon that Google+ account yet. A new study of the top brands on Google’s social network found that their presence is greatly expanding—and so is engagement among users (dubbed “circlers,” because “circle” is the Google+ equivalent to a “like” or follow). Simply Measured, which compiles and presents social data, evaluated the Google+ presence of companies from the Interbrand 100 list. The study found that 64 percent of these brands have an active Google+ page, and 22 percent have pages with more than 100,000 circlers. This graph shows the steady increase in the number of circles for these brand pages: Tech pundits heralded Google+ as a challenger to Facebook’s dominance in the social networking space, but as interest waned for the nascent social network tech media began ringing its death knell (or at least its irrelevant knell).

Launching Blackboard Collaborate Start Session Optionally, you can pre-configure your computer and test your audio using one of our Configuration Rooms prior to your session. Please visit our "First time Users" section in the Support Portal to view configuration rooms for Blackboard Collaborate web conferencing. Building A Brand Consumers Can Believe In To build a brand that stands above the rest--especially in the rapid shifts of retailing--you have to do more than offer the best products and service in your industry. You have to create a following that will stand by you when things go wrong, push you to be better, and lift you above the competition. When you achieve that, you have to be as loyal to your fans as they are to you. Consumers today have more choices and more power to support companies that give them something to love. It's not just about access, convenience, or outstanding customer service anymore; these are requirements for brands and are increasingly taken for granted. People are now seeking brands that fit with their values and give them something to believe in--plus the best quality and price on the market.

Syria After the Massacre Damascus Parts of Syria are convulsed by civil war, while in other areas life continues almost as normal. At the same moment as more than 30 children had their throats cut and dozens of civilians were killed by shelling in Houla in central Syria on Friday, people in Damascus were picnicking on the slopes of Mount Qassioun, overlooking the capital. Syria yesterday denied that its forces had carried out the massacre of at least 116 people including dozens of children in Houla, claiming that the slaughter was the work of rebels. But it did not give a detailed account of what had happened that would convincingly refute allegations by insurgents, largely supported by UN monitors, that military units and militia men loyal to the government had carried out the killings. Sources in Damascus told me yesterday that they believed the attack had been carried out by regime forces in revenge for the killing of a government informant in the nearby Alawite village of Kabou a month earlier.

Why QR Codes Won't Last Jon Barocas is the founder and CEO of bieMEDIA, a Denver-based online marketing and media solutions company that specializes in video content production and distribution, mobile visual search, technology platforms, SEO, VSEO and more. Like most technology fans, I am always ready and willing to try any technology that promises to simplify my life. QR codes seemed to present an accessible and uniform way for people with smart devices to interact with advertising, marketing and media.

The Class Differential in Privacy Law by Michele E. Gilman University of Baltimore - School of Law2012 Brooklyn Law Review , Vol. 77, No. 4, Summer 2012 Abstract: Two Keys To Be Influential On Twitter The ability to influence is something that is valued by many. Sales people succeed or fail by their power to influence and marketers commit companies and brands to multi million dollar budget marketing campaigns hoping to influence buyers to turn up to store or a show and buy products and services. Robert Cialdini previously the Professor of Psychology and Marketing at Arizona State University and the author of the best selling book “Influence: The Psychology of Persuasion” mentions six weapons of influence that he sees as being important in the art and science of influence. 1. Reciprocity – People tend to return a favor, thus the pervasiveness of free samples in marketing.

Clive Thompson on How Tweets and Texts Nurture In-Depth Analysis Illustration: Thomas Ng We’re often told that the Internet has destroyed people’s patience for long, well-thought-out arguments. After all, the ascendant discussions of our day are text messages, tweets, and status updates. F-Commerce Trips as Gap to Penney Shut Facebook Stores: Retail (Corrects to remove wrongly attributed quote in seventh paragraph of Feb. 17 story.) Last April, Gamestop Corp. (GME) opened a store on Facebook to generate sales among the 3.5 million-plus customers who’d declared themselves “fans” of the video game retailer. Six months later, the store was quietly shuttered. Gamestop has company. Over the past year, Gap Inc., J.C.

About Target, statistics, and pregnancy by steventang Feb 20

.... One study from Duke University estimated that habits, rather than conscious decision-making, shape 45 percent of the choices we make every day, and recent discoveries have begun to change everything from the way we think about dieting to how doctors conceive treatments for anxiety, depression and addictions." by pattychanman Feb 17

"The reason Target can snoop on our shopping habits is that, over the past two decades, the science of habit formation has become a major field of research in neurology and psychology departments at hundreds of major medical centers and universities, as well as inside extremely well financed corporate labs. “It’s like an arms race to hire statisticians nowadays,” said Andreas Weigend, the former chief scientist at Amazon.com. “Mathematicians are suddenly sexy.” As the ability to analyze data has grown more and more fine-grained, the push to understand how daily habits influence our decisions has become one of the most exciting topics in clinical research, even though most of us are hardly aware those patterns exist... by pattychanman Feb 17

Also linked to your Guest ID is demographic information like your age, whether you are married and have kids, which part of town you live in, how long it takes you to drive to the store, your estimated salary, whether you’ve moved recently, what credit cards you carry in your wallet and what Web sites you visit. Target can buy data about your ethnicity, job history, the magazines you read, if you’ve ever declared bankruptcy or got divorced, the year you bought (or lost) your house, where you went to college, what kinds of topics you talk about online, whether you prefer certain brands of coffee, paper towels, cereal or applesauce, your political leanings, reading habits, charitable giving and the number of cars you own. (In a statement, Target declined to identify what demographic information it collects or purchases.) All that information is meaningless, however, without someone to analyze and make sense of it. That’s where the members of Guest Marketing Analytics department come in." by pattychanman Feb 17