Gerrard's departure and a loss of identity

Cheering the other side is still football’s ultimate tribal taboo. Moments after Cesc Fàbregas’s name was announced at Stamford Bridge, a triumphant upward stress placed on those final syllables as if hailing a world champion boxer, there were boos from the Arsenal end. 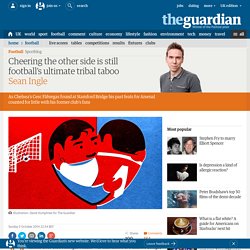 After a fortnight during which Francesco Totti, that ageless Roman dux, was given an abundant ovation by Manchester City fans and Frank Lampard was applauded by Chelsea supporters, it was back to business as normal. No one was surprised. Lionel Messi could exhibit a stud-perfect roulette and the reaction of most opposition fans would still resemble that of a 70s working men’s club to alternative comedy: arms locked together, eyes fixed on target, rage seeping from every unconditioned bristle. Fàbregas played over 250 times for Arsenal and his only crime appears to have been spurned by Arsène Wenger in the summer. Yet the change to Chelsea blue was enough for deep emotional cords to be hacked off. What would it have cost Arsenal fans to be more generous? So what has changed?

Left Wing Liverpool & The Politics Of Our Club. Steven Gerrard: The £7.5m a year superstar and the dubious company he can't shake off. By Richard Price for the Daily Mail Updated: 22:43 GMT, 24 July 2009 Relief: Steven Gerrard outside court. 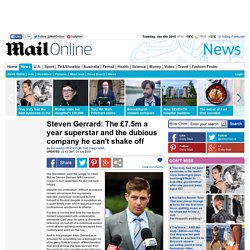 The football superstar 'doesn't feel comfortable with people from a different class' His reputation, said the judge, is intact. But as Steven Gerrard left Liverpool Crown Court yesterday, he did not look happy. Despite his vindication, difficult questions remain about how this supremely talented individual continues to land himself in trouble despite a reputation as a quiet family man which would put most professional sportsmen to shame. For this is not the first time he has found himself associated with undesirable elements. And in his younger days Gerrard was arrested for shoplifting (as a teenager he stole pens from a branch of Woolworths) and drink driving (he was banned from the roads for nine months a decade ago). Small beer in comparison to many youngsters in this crime-blighted age, of course, and yet he was not any old teenager. Doran and Smith then kicked McGee. ECHO readers vote Steven Gerrard as the best Liverpool FC player of all time. Steven Gerrard: Fewer Liverpool starts reason for MLS switch.

3 January 2015 Last updated at 19:05 GMT Liverpool captain Steven Gerrard says being told he will start fewer games is the main reason he has decided to leave Anfield for America in the summer. 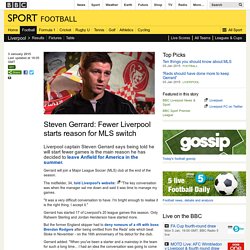 Gerrard will join a Major League Soccer (MLS) club at the end of the season. The midfielder, 34, told Liverpool's website: "The key conversation was when the manager sat me down and said it was time to manage my games. "It was a very difficult conversation to have. I'm bright enough to realise it is the right thing. Gerrard has started 17 of Liverpool's 20 league games this season. Steven Gerrard will move to MLS as Rodgers defends Liverpool handling of exit. Liverpool have confirmed that Steven Gerrard will move to Major League Soccer at the end of the season, while his manager, Brendan Rodgers, rejected suggestions the club had not done enough to keep their inspirational captain. 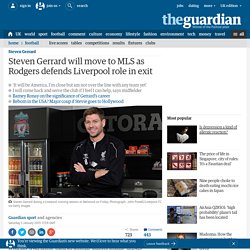 The Captain Before The Armband. It’s often the players who seek the elusive who find only the 'what might have beens' in football. 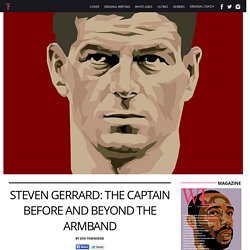 Some players are simply part of the wrong generation. This generation is one where club loyalty is a rarity and a nation’s World Cup hopes didn’t hinge solely upon expectation, but rather continue to sway in the wind, dangling from the hangman’s noose. Steven Gerrard. Gerrard made his international debut for the England national football team in 2000, and represented his country at the 2000, 2004 and 2012 UEFA European Football Championships, as well as the 2006, 2010 and 2014 FIFA World Cups – captaining the team at the latter two tournaments.[7] He was named as the permanent England captain shortly before UEFA Euro 2012,[8] where he was named in the UEFA Team of the Tournament.[9] Gerrard became the sixth player to win 100 caps for England in 2012,[10] and is currently third in the country's all time appearance list. 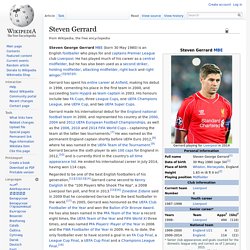 He ended his international career in July 2014, having won 114 caps. Early life Born in Whiston, Merseyside,[1] Gerrard started out playing for hometown team Whiston Juniors, where he was noticed by Liverpool scouts. Why aren't football fans allowed to swap teams? This is football’s last great taboo, even though loyalty in the sport died years ago. 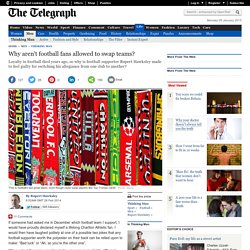 Clubs swap players and managers like Top Trumps cards; agents hold chairmen to ransom; owners focus ever more on the bottom line, without so much as a thought for such lofty conceits as ‘heritage’ and ‘tradition’. Even the fans – so often referred to as the victims of all this – are not blameless, merrily forgiving the latest Judas to cross some unspeakable divide... just as long as said Judas starts scoring regularly, of course.

In 2010, Manchester United’s Wayne Rooney publicly courted Manchester City, his employer’s bitter and very wealthy rivals. A mob of angry Manchester United fans turned up on the striker’s doorstep, demanding answers (which incidentally never came). Last week, Rooney became United’s highest paid player of all time. Football, like all sport, is a form of entertainment. The problem with that sepia-tinted argument is that fewer people support their home town teams nowadays. Gerrard moves on: Mr Liverpool divorces his only love. A man who is just as proud to be from Liverpool as Liverpool is proud to have him. 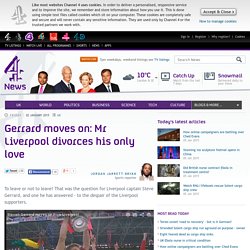 A passionate and honest representative of the city, someone who eats and breathes football. Liverpudlians see in Gerrard a piece of themselves. A man who's one of their own and happy to tell the world. He’s never let them down in victory and defeat, stuck with them when other lucrative and trophy-contesting clubs wanted him - and that loyalty will never be forgotten.