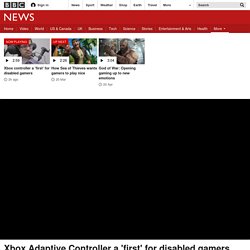 Lucas Warren: Baby with Down's becomes face of Gerber. Image copyright Gerber An 18-month-old boy with Down's syndrome has been named as this year's "spokesbaby" of the US baby food brand Gerber. 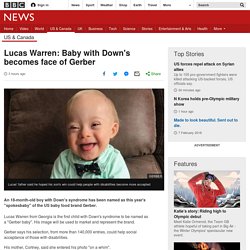 Lucas Warren from Georgia is the first child with Down's syndrome to be named as a "Gerber baby". His image will be used to market and represent the brand. Gerber says his selection, from more than 140,000 entries, could help social acceptance of those with disabilities. His mother, Cortney, said she entered his photo "on a whim". Gerber's CEO, Bill Partyka, described Lucas as "the perfect fit". Mat Fraser on playing Richard III and TV's 'pathetic' disabled casting. Image copyright Nobby Clark Mat Fraser is the first disabled actor to play Shakespeare's twisted anti-hero Richard III - and he's relishing the political incorrectness of the Bard's script. 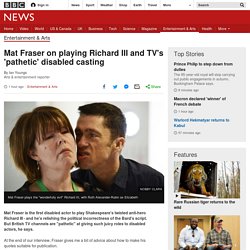 But British TV channels are "pathetic" at giving such juicy roles to disabled actors, he says. At the end of our interview, Fraser gives me a bit of advice about how to make his quotes suitable for publication. Oxford University puts up more portraits of women. The ex-trader turning disabilities into profits. Image copyright Rich Donovan It's a fast-paced, risk-taking industry glamorised by Hollywood and writers alike, but when one Wall Street trader left the floor he identified a huge market being ignored by the business world. 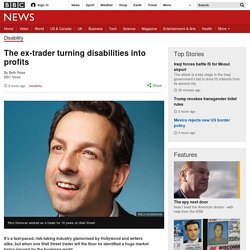 Canada-based businessman Rich Donovan worked as a trader for Merrill Lynch for 10 years after graduating from the prestigious Columbia Business School. It was competitive enough, but with cerebral palsy he felt he had more to prove. "I was told to my face that I would never be a trader. They were wrong, but that's just the reality of having a disability. He says he was asked at every job interview, "Can you physically do this job? " Donovan was offered every job he went for and says there was "never a time that I hit a barrier, largely because I was 10 steps ahead of what I needed to be".

It is this attitude that has led him to identify a market worth $8 trillion (£6.4tn) and brimming with untapped talent: the disability market. Image copyright Getty Images. The power of the 'purple pound' explained. UN: 'Grave' disability rights violations under UK reforms. Image copyright Science Photo Library UK welfare reforms have led to "grave and systematic violations" of disabled people's rights, a UN inquiry has said. 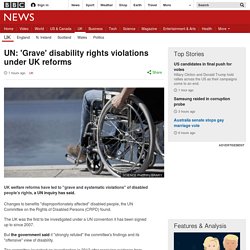 Changes to benefits "disproportionately affected" disabled people, the UN Committee on the Rights of Disabled Persons (CRPD) found. The UK was the first to be investigated under a UN convention it has been signed up to since 2007. But the government said it "strongly refuted" the committee's findings and its "offensive" view of disability.

The committee launched an investigation in 2012 after receiving evidence from disability organisations about an "alleged adverse impact" of government reforms on disabled people. Two UN committee members visited London, Manchester, Birmingham, Cardiff, Edinburgh and Belfast in October 2015 to identify any gaps in human rights protection for disabled people. Other findings: Disabled models and athletes outraged by Brazilian Vogue Paralympic campaign photo - BBC Newsbeat. Lego brings in first ever minifigure in a wheelchair. Pretty much all children watch kid’s television programmes and play with toys right? 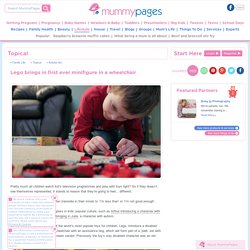 So if they doesn’t see themselves represented, it stands to reason that they’re going to feel... different. And sadly this difference can often translate in their minds to ‘I’m less than’ or ‘I’m not good enough’. We’ve seen some welcome progress in kids’ popular culture, such as Arthur introducing a character with Asperger’s and Sesame Street bringing in Julia, a character with autism. So we were thrilled to see one of the world’s most popular toys for children, Lego, introduce a disabled minifigure of a young man in a wheelchair with an assistance dog, which will form part of a ‘park’ set with picnickers, cyclists and an ice-cream vendor. Previously the toy’s only disabled character was an old man. Rebecca Atkinson, who started #ToyLikeMe, the campaign calling on the toy industry and children's TV to better culturally represent 150 million disabled kids worldwide, is delighted with the move. 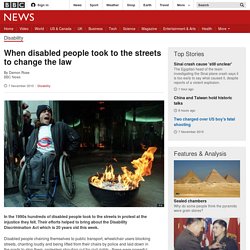 Their efforts helped to bring about the Disability Discrimination Act which is 20 years old this week. Disabled people chaining themselves to public transport, wheelchair users blocking streets, chanting loudly and being lifted from their chairs by police and laid down in the roads to stop them, protesters shouting out for civil rights - these were powerful images on the TV news in the early 90s, and a far cry from how disabled people were often represented (when they were represented at all), as passive and grateful recipients of charity. In fact one of the movement's first big protests - in July 1992, was against ITV's 24-hour telethon fundraiser.

The organisers were angry with what they said was a pitiful portrayal of disabled people on the programme and claim to have had 1,500 people out in support.