Who in Congress Supports SOPA and PIPA/PROTECT-IP? 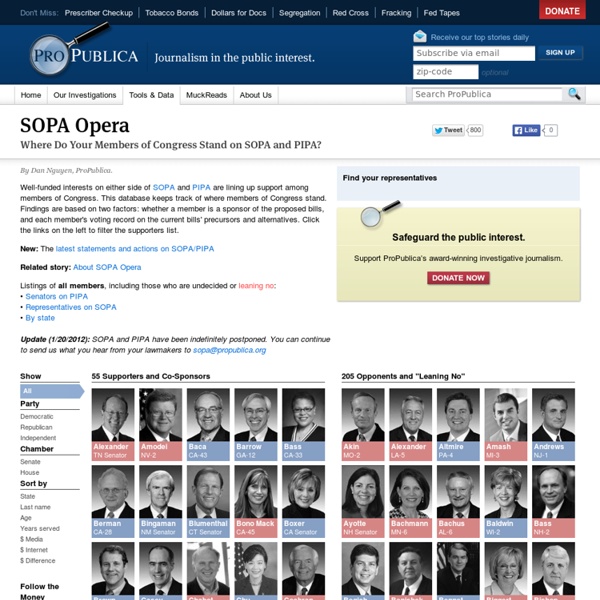 DC Kids Count Data Tools | DC Action for Children We measured the presence of six assets: high levels of homeownership, low levels of violent crime, high levels of youth (age 16-24) employment and the presence of recreation centers, libraries and grocery stores. (Not all of these are mapped here.) Nearly every neighborhood cluster had at least one asset. High-asset neighborhoods are in every quadrant of the city. Neighborhoods with the highest concentrations of assets (all six asset indicators) are in the Northwest quadrant of the city. Notably, two neighborhoods clusters have none of the institutional assets (libraries, grocery stores and recreation center) in the analysis.

SOPA, PIPA and bills like them want to kill this blog. And yours January 18, 2012 by Olivier Blanchard If you like this blog and others like it, don’t support SOPA or any of its variants. If you hate this blog and others like it, support SOPA and all of its variants. It’s that simple. 1. 2. As much as I’ve loved writing here for the last 7 years, if SOPA or any future incarnations of SOPA pass, I will have to shut down this blog. As for the reason why supporters of SOPA are wrong about it, there’s this: SOPA doesn’t just completely miss the mark when it comes to making it harder for digital piracy to take place, it also basically puts the internet under Taliban rule. Call or email your representatives (or post to their wall on FB) and tell them not to vote in favor of the bill or any other bill that addresses online piracy in this way. PS: This blog post is in violation of SOPA/PIPA. Like this: Like Loading...

Le Pariteur Join Our Censorship Protest! Have you been paying attention to all the hubbub online about the proposed U.S. legislation (SOPA/PIPA) that threatens internet freedom? I wrote about it last week over on WordPress.org, but the gist is this: there’s a bill in the U.S. Senate that if passed would put publishing freedom severely at risk, and could shut down entire sites at the whim of media companies. Fight for the Future created this nifty video to sum it up better than I can. On January 18, 2012, sites all over the internet will be blacking out to protest and try to mobilize more people to speak out against this bill coming up in the Senate next week — S. 968: the Protect IP Act (PIPA) — in an attempt to let U.S. lawmakers know how much opposition there is. Here on WordPress.com, we want to participate as well. Sorry to take away your daily fix of yummy web content, but this bill threatens to do that on a much wider scale. More importantly, we are making it possible for you to participate in the protest. That’s it!

The Apps|Code 4 Kenya GotToVote GotToVote! is an example of how open data can be useful to ordinary citizens. GotToVote! Website | Github Web Censorship in the USA? Is it possible that the United States government can start censoring the web similarly to the Chinese government? It is! Two bills exist in the US Congress that are gaining lots of support. The first bill is in the Senate and is called the Protect IP Act, the second, in the House is Stop Online Piracy Act. Learn more about these bills by clicking the below links or viewing the following infographic (courtesy of (provided by Stop American Censorship) and a video, by Fight for the Future. Many US based companies are taking action today by participating in an Internet blackout. Courtesy of Kikolani.com, this extremely informative infographic; learn more by clicking on her site link. I urge you to take action by filling out this form – it will take you 5 seconds or less!

Wedodata Wikipedia Also Going Dark Wednesday Over SOPA, PIPA Wikipedia has pledged to go dark this Wednesday for 24 hours in protest of the Stop Online Piracy Act (SOPA) and the PROTECT IP Act (PIPA). The blackout will begin at midnight on Wednesday and run all day, Wikipedia co-founder Jimmy Wales confirmed on Twitter. It will be a global protest, but will only affect the English version of Wikipedia. The German site, however, will include a SOPA-related banner and "other languages will make their own decisions," Wales tweeted. According to comScore data, the English Wikipedia receives 25 million average daily visitors globally, though with the press that Wednesday's protest receives, that could jump to 30 to 40 million, Wales speculated today. "This is going to be wow. SOPA and its Senate counterpart, PIPA, would allow the Justice Department to obtain court orders and go after overseas "rogue" Web sites that traffic in countefeit goods, from purses to prescription drugs. "We have no indication that SOPA is fully off the table.

Government spending by department, 2011-12: get the data | UK news It is a lot of money, but what does £694.89bn really buy you in 2012? Guardian Data's annual audit of UK government spending this year shows huge cuts taking place across supposedly protected areas of government as the austerity programme hits home. Public spending in 2011-12 was £694.89bn - compared to £689.63bn in 2010-11. That may look like an increase but once inflation is taken into account, it is a real-terms cut of 1.58%, or £10.8bn. However, that £10.8bn cut masks big drops in spending in over 40 government departments and quangos, including 'protected' areas such as health and education. Thanks to Guardian graphic artist Jenny Ridley, we can see how that spending fits together - and how anything less than a billion is really not that much in government terms - particularly compared to a budget deficit of £121.4bn for 2011-12. Explore the graphic The data - for the financial year 2011-12 - is the first time this year's information has been collected in a single place. The Losers

Patrick Leahy Leahy is the only elected Democratic Senator in Vermont's history. He is the chairman of the Senate Judiciary Committee.The Senate Judiciary Committee worked extensively on prison reform with the introduction on a number of bills aimed at reforming the overcrowded prisons. The bills include: Justice Safety Valve Act of 2013. The Smarter Sentencing Act of 2013, and the Public Safety Enhancement Act. Early life and family[edit] Leahy was born in Montpelier, Vermont, the son of Alba (née Zambon) and Howard Francis Leahy, a printer. He graduated from Saint Michael's College in 1961 and received his J.D. from Georgetown University Law Center in 1964. Leahy married Marcelle Pomerleau in 1962; she is bilingual with French Canadian heritage from Quebec immigrants in Vermont. U.S. Early career (1974–1997)[edit] An early Senate photo of Leahy Leahy was the first non-Republican Senator from Vermont since 1856. Later career (1998–present)[edit] Committee assignments[edit] Party leadership[edit]