How OneName Makes Bitcoin Payments as Simple as Facebook Sharing. Though the Bitcoin protocol has been described as an elegant solution to problems that have long plagued both digital currencies and the traditional monetary system, aspects of its construction violate one of the central tenets of tech design: 'keep it simple, stupid' (often abbreviated to KISS). 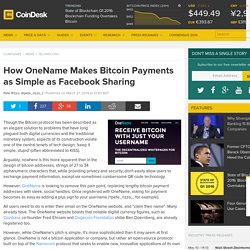 Arguably, nowhere is this more apparent than in the design of bitcoin addresses, strings of 27 to 34 alphanumeric characters that, while providing privacy and security, don't easily allow users to exchange payment information, except via sometimes cumbersome QR code technology. However, OneName is looking to remove this pain point, replacing lengthy bitcoin payment addresses with sleek, social handles. Once registered with OneName, asking for payment becomes as easy as adding a plus sign to your username (+pete_rizzo_, for example). All users need to do is enter their email on the OneName website, and "claim their name". Many already have. Explained Ali: The big picture. Why Fragmentation Threatens the Promise of Blockchain Identity. William Mougayar is a Toronto-based entrepreneur, investor and advisor to Consensus 2016, CoinDesk's flagship conference. 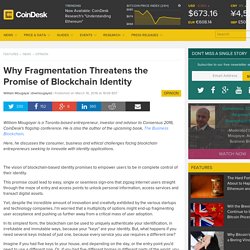 He is also the author of the upcoming book, The Business Blockchain. Here, he discusses the consumer, business and ethical challenges facing blockchain entrepreneurs seeking to innovate with identity applications. The vision of blockchain-based identity promises to empower users to be in complete control of their identity. On KYC and blockchains. It’s official: Blockchains for everything! 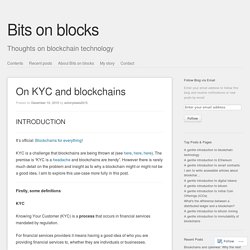 KYC is a challenge that blockchains are being thrown at (see here, here, here). The premise is “KYC is a headache and blockchains are trendy”. However there is rarely much detail on the problem and insight as to why a blockchain might or might not be a good idea. Proof of Existence. How it works. Scan and Validate Credit Cards and IDs. What is the future of digital identity? — Humans + Bits + Blocks. What is the future of digital identity? 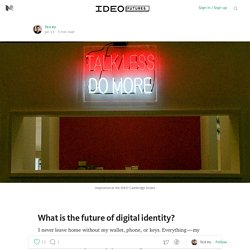 I never leave home without my wallet, phone, or keys. Everything — my credit cards, driver’s license, social media accounts, apartment keys — is a link back to me. They are the physical and digital manifestations of who I am and what I can do. The problem is that all these manifestations are fragmented. One card only works for one company. Sure, carrying some plastic and metal in my pockets isn’t asking too much from me. Imagine, for a second, if we lived in a world where we could carry the different pieces of our identities across any (digital or physical) border without any friction.

This might sound like a tall order, but it’s actually something we’re making progress on. At the Bits + Blocks coLAB, we’ve been exploring the potential of blockchains in the future of identity. Building Something Real.

Case - The world's most secure and easy-to-use bitcoin wallet. Netki. Onename. BitID Open Protocol - Demonstration site. Identifi - Connect What Matters  Cambridge Blockchain. Trunomi. uPort: The Wallet is the New Browser. uPort: The Wallet is the New Browser ConsenSys internally released a web-based wallet and identity management system — uPort — during our first ‘persona week’ — a period of concerted discussions about wallet, ID and persona amongst all of our developer teams. 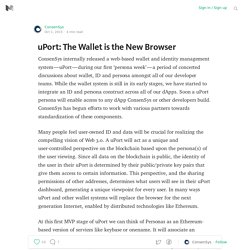 While the wallet system is still in its early stages, we have started to integrate an ID and persona construct across all of our dApps. Soon a uPort persona will enable access to any dApp ConsenSys or other developers build. ConsenSys has begun efforts to work with various partners towards standardization of these components. Many people feel user-owned ID and data will be crucial for realizing the compelling vision of Web 3.0. 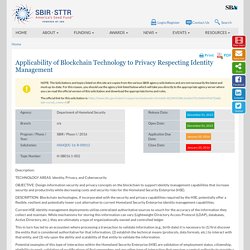 DESCRIPTION: Blockchain technologies, if incorporated with the security and privacy capabilities required by the HSE, potentially offer a flexible, resilient and potentially lower cost alternative to current Homeland Security Enterprise identity management capabilities. Current HSE identity management deployments utilize centralized authoritative sources to vouch for the accuracy of the information they collect and maintain. While mechanisms for storing this information can vary (Lightweight Directory Access Protocol (LDAP), databases, Active Directory, etc.), they are ultimately a type of organizationally owned and controlled ledger. Nakamoto, Satoshi. Proof of Identity on Ethereum (or the “KYC problem”) It doesn’t come as a surprise that the “KYC problem” is such a hot topic today when talking about interesting blockchain apps. 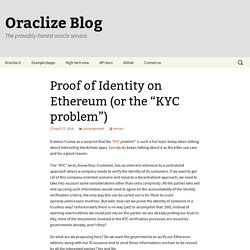 Everybody keeps talking about it as the killer use case and for a good reason. The “KYC” term, Know-Your-Customer, has an inherent reference to a centralized approach where a company needs to verify the identity of its customers. If we want to get rid of this company-oriented scenario and move to a decentralized approach, we need to take into account some considerations other than extra complexity. All the parties who will end up using such information would need to agree on the accountability of the identity verification criteria, the only way this can be sorted out is for them to avoid opening unnecessary trustlines. Identity of the Blockchain: Perils and Promise.