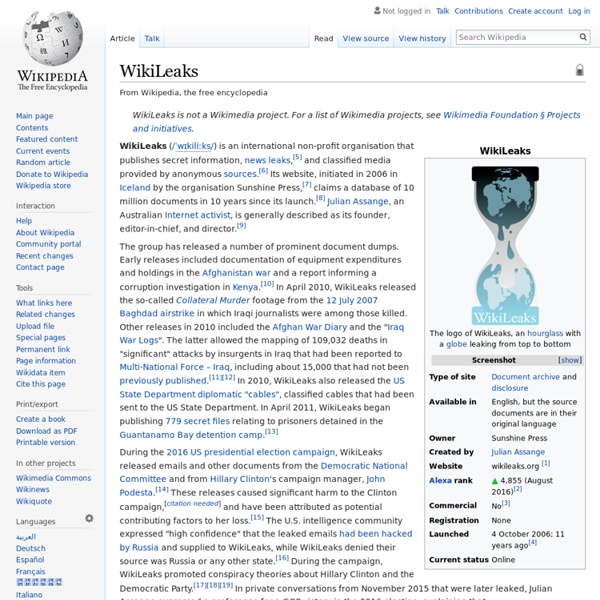 During the 2016 US presidential election campaign, WikiLeaks released emails and other documents from the Democratic National Committee and from Hillary Clinton's campaign manager, John Podesta.[14] These releases caused significant harm to the Clinton campaign,[citation needed] and have been attributed as potential contributing factors to her loss.[15] The U.S. intelligence community expressed "high confidence" that the leaked emails had been hacked by Russia and supplied to WikiLeaks, while WikiLeaks denied their source was Russia or any other state.[16] During the campaign, WikiLeaks promoted conspiracy theories about Hillary Clinton and the Democratic Party.[17][18][19] In private conversations from November 2015 that were later leaked, Julian Assange expressed a preference for a GOP victory in the 2016 election, explaining that "Dems+Media+liberals woudl [sic] then form a block to reign [sic] in their worst qualities. History Staff, name and founding Purpose Administration Financing

Executive Order 11110 Executive Order 11110 was issued by U.S. President John F. Kennedy on June 4, 1963. Background[edit] On November 28, 1961, President Kennedy halted sales of silver by the Treasury Department. Increasing demand for silver as an industrial metal had led to an increase in the market price of silver above the United States government's fixed price. Kennedy repeated his calls for Congress to act on several occasions, including his 1963 Economic Report, where he wrote:[3] I again urge a revision in our silver policy to reflect the status of silver as a metal for which there is an expanding industrial demand. Public Law 88-36[edit] The House of Representatives took up the president's request early in 1963,[4] and passed HR 5389 on April 10, 1963, by a vote of 251 to 122.[5][6] The Senate passed the bill on May 23, by a vote of 68 to 10.[7][8] Text of Executive Order[edit] President Kennedy's Executive Order (E.O.) 11110 modified the pre-existing Executive Order 10289 issued by U.S. SECTION 1.

Kabul War Diary Twenty Minutes with the President Reported by Charlie Sheen Infowars Tuesday, September 8, 2009 Related: Sheen Blasts Cowardly Corporate Media Refusal to Debate 9/11 Facts Charlie Sheen’s Video Message to President Obama Alex Jones interviews Charlie Sheen. I recently had the pleasure of sitting down with our 44th President of the United States of America, Barack Hussein Obama, while he was out promoting his health care reform initiative. I requested 30 minutes given the scope and detail of my inquiry; they said I could have 20. Charlie Sheen – Good afternoon Mr. President Barack Obama – My pleasure, the content of your request seemed like something I should carve out a few minutes for. CS – I should point out that I voted for you, as your promises of hope and change, transparency and accountability, as well as putting government back into the hands of the American people, struck an emotional chord in me that I hadn’t felt in quite some time, perhaps ever. PBO – And I appreciate that Charlie. PBO – I’m all ears. PBO – Yes.