Making the University a Police State 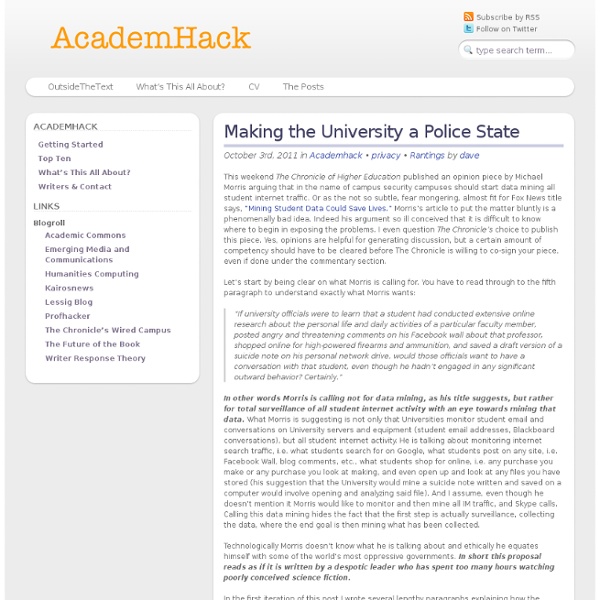 This weekend The Chronicle of Higher Education published an opinion piece by Michael Morris arguing that in the name of campus security campuses should start data mining all student internet traffic. Or as the not so subtle, fear mongering, almost fit for Fox News title says, “Mining Student Data Could Save Lives.” Morris’s article to put the matter bluntly is a phenomenally bad idea. Indeed his argument so ill conceived that it is difficult to know where to begin in exposing the problems. I even question The Chronicle’s choice to publish this piece. Let’s start by being clear on what Morris is calling for. In other words Morris is calling not for data mining, as his title suggests, but rather for total surveillance of all student internet activity with an eye towards mining that data. Technologically Morris doesn’t know what he is talking about and ethically he equates himself with some of the world’s most oppressive governments. Morris’s logic goes something like this.

Mining Student Data Could Save Lives - Commentary By Michael Morris He hadn't taken his medication in weeks—didn't need it. His clarity and focus over the past couple of months were sharper than they had ever been. If only there had been a way to look into a crystal ball and see that this horrific confrontation was about to occur, it could have been prevented. Unfortunately, these teams are only able to assess students whose issues have already led to problematic behaviors noticed by people on campus. Many campuses across the country and most in California provide each student with an e-mail address, personal access to the university's network, free use of campus computers, and wired and wireless Internet access for their Web-connected devices. This information, which may reside in the university's IT system, would allow the campus to strategize a swift and effective intervention, and take steps to prevent violent behavior from ever occurring. Interestingly, the technology exists to allow university officials to take such actions.

Southern fires campus police chief Posted: Apr 24, 2010 8:35 PM by Rob Krieger Updated: Apr 25, 2010 12:06 PM Source: WBRZ Southern University spent the past week without its Chief of Police after he was forced out on Wednesday. Former Chief Michael Morris says he was fired without warning. "They told me, 'Chief, Southern's Police department, we want to take it in a different direction and that direction doesn't include you,'" said Morris. He thinks he was fired because of a series of break-ins at the new field house, but he claims he warned the University the building was a burglar's dream. "At the outset, I told them, put in an alarm, put in motion sensors, put in video surveillance," said Morris. Morris said during his four year tenure as Chief, crime dropped while he lowered costs. Southern University responded to News 2's request for a comment saying, "We won't comment on personnel matters."

The New Road to Serfdom NB--this is an archived version of the very first essay I wrote on the internets, in 2004 (i think :). i've republished it here in 2012 (dis)honor of SOPA.The New Economics of Music: File-Sharing and Double Moral Hazard Part 1: Why the Music Industry is (Really) Broken ‘The whole point of digital music is the risk-free grazing’ – Cory Doctorow Every major label 's setting up an iTunes these days. I reached this conclusion because, as I was scoping BoingBoing one day, I read Cory's statement, and it struck me as exactly right. Fundamentally, I'm going to argue that consumers download music, as much to derive extra value from getting something for free, as they do because they want insurance against buying something they didn't want in the first place. Here are the basic economics of the music industry: The major record labels assume market risk in exchange for value. We can also look at this through the lens of contract theory. Now, in most real-world markets, information is an issue.

Hackgate, power elites and the limits of the “corruption” critique Just days before the first revelations of hackgate started to emerge, I remarked to a left-wing friend of mine impatient at the failure of the causes we share to gain any wider traction, that it was nearly always “corruption” scandals involving elites rather than the power of reasoned critique which opened up a window for profound and lasting change. The observation stemmed from the insight of Robert Darnton, and other scholars of revolutionary France, that it was not so much the rational arguments of the Enlightenment philosophes, but the relentless attacks of the libellistes – the French gutter press - on the greed and depravity of Louis XVI and his wife Marie Antoinette, which led to the French populace’s disillusionment with monarchy and ultimately the downfall of the ancien regime. More recently, we saw in Egypt, how the malfeasance of Mubarak’s government, as exposed by Wikileaks and others, played such an important role in spurring on the protesters. We are at a pivotal moment.

Falkvinge: European Democracies Get To Live Another Day Because Crazy Had Particular Skin Color, Invisible Friend European democracies are under assault, both from the outside and from within. Those on the outside of government would have us hate. Those on the inside would have us fear. Democracy is not primarily a concept where 51% of the people get to tell the other 49% what to do. In that shape, it is nothing more than three wolves and a lamb voting about what to have for dinner. Democracy has a tradition of rights for the individual that dates back to the Enlightenment and the separation between church and crown. And exactly that ability is being eroded at an alarming rate. Representatives of governments everywhere miss no chance in instilling fear in the population; fear that will cause the people to come to government for “protection”. Now, society has always had the ability and right to track down criminals and suspend some rights of citizens under suspicion of a crime, depending on the severity. And this is driven by cries of protection. “Here! But that’s only rationally.

Political freedom Views[edit] Various groups along the political spectrum naturally differ on what they believe constitutes "true" political freedom. Left wing political philosophy generally couples the notion of freedom with that of positive liberty, or the enabling of a group or individual to determine their own life or realize their own potential. Freedom, in this sense, may include freedom from poverty, starvation, treatable disease, and oppression, as well as freedom from force and coercion, from whomever they may issue. Friedrich Hayek, a well-known classical liberal, criticized this as a misconception of freedom: [T]he use of "liberty" to describe the physical "ability to do what I want", the power to satisfy our wishes, or the extent of the choice of alternatives open to us ... has been deliberately fostered as part of the socialist argument ... the notion of collective power over circumstances has been substituted for that of individual liberty.[9] History[edit] See also[edit] References[edit]

De volgende onheilsprofeet Dr. Noreena Hertz, docent aan de universiteit van Cambridge, is een mooie vrouw. Sinds ze schrijver en volgens velen «toonaangevend denker» werd, is dat een probleem. Spottend beschreven mannelijke recensenten het auteursportret op de binnenflap van haar boek The Silent Takeover. Dat is not done en in feite een omgekeerde vorm van seksisme. Noreena Hertz - Why we must stay silent no longer | Politics | The Observer In the hullaballoo following the American presidential election, with hanging and pregnant chads, and ballot forms that needed a PhD to decipher, it was easy to forget something that was in many ways even more alarming than confusion over who won. More than 90 million Americans had not bothered to vote - that is, more than the combined population of England, Ireland and Scandinavia. Low turnout is not just a US phenomenon. People have lost faith in politics, because they no longer know what governments are good for. Unregulated or under-regulated by governments, corporations set the terms of engagement themselves. At the headquarters of the World Trade Organisation on the banks of Lake Geneva we see rulings being made in the names of the free market that limit states' abilities to safeguard their people's interests. In view of the power these corporations wield their threats were taken seriously. So it is left to us, through individual action, to take the lead.