What is your tree sign? Spiritual Meanings from an Ancient Slav Zodiac [Article] 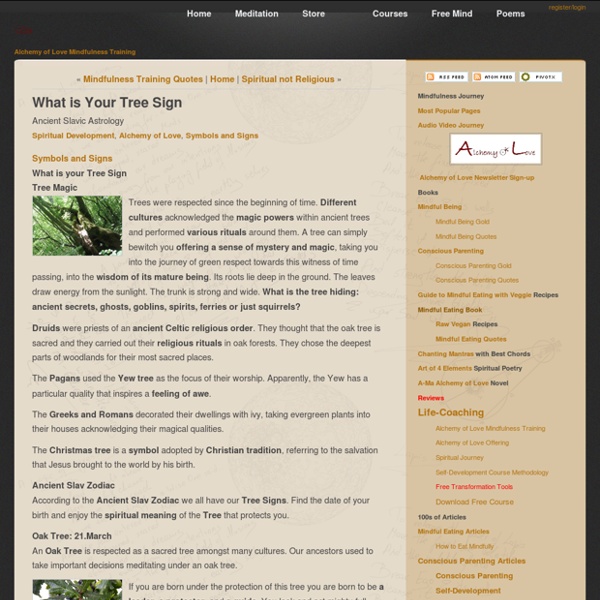 What is Your Tree Sign Ancient Slavic Astrology Spiritual Development, Alchemy of Love, Symbols and Signs What is your Tree Sign Tree Magic Trees were respected since the beginning of time. Druids were priests of an ancient Celtic religious order. The Pagans used the Yew tree as the focus of their worship. The Greeks and Romans decorated their dwellings with ivy, taking evergreen plants into their houses acknowledging their magical qualities. The Christmas tree is a symbol adopted by Christian tradition, referring to the salvation that Jesus brought to the world by his birth. Ancient Slav Zodiac According to the Ancient Slav Zodiac we all have our Tree Signs. Oak Tree: 21.March An Oak Tree is respected as a sacred tree amongst many cultures. If you are born under the protection of this tree you are born to be a leader, a protector, and a guide. Hazelnut tree 22. - 30. A magic fruit tree. A lot of energy follows the people born under the protection of the hazelnut tree. Walnut tree. 21. - 30.

Spiritual Meaning of Numbers [Article] Symbols Numbers Spiritual Meaning of Numbers Symbols and Signs Spiritual Meaning of Numbers ‘Numbers and numerical proportions have a certain meaning for the cosmos and the world. It is in numbers, we might say, that the harmony that dwells through space is expressed’ Rudolf Steiner, Occult Signs and Symbols The Symbolism of Zero 0 It took Europe relatively long to accept the concept of zero. Zero is associated with nil, non-being, nothingness, emptiness, and with zero defining non-quantitative as non-existent, everything non-quantifiable could now be defined as non-existent - including God. Accepting zero led to the invention of relative numbers, negative quantities, infinite decimal points, abstract and irrational, imaginary numbers. 0 is symbolised by the Tarot card called: Fool, the Element of Air Represented by the HEBREW LETTER: Aleph = Bull or Ox. Spiritual Meaning of Number One 1 Tree of Life, Tarot and Number 1 The Aces are the ‘root’ principles of each element. ‘Energy sent forth.

Esoteric Wisdom: The Pineal Gland And Shamanism The Pineal Gland has for long been associated with Esoteric Knowledge surrounding the spiritual, metaphysical aspects of consciousness and the self. René Descartes, who dedicated much time to the study of the pineal gland, called it the "Seat of the Soul". He believed that it was the point of connection between the intellect and the body. The Pineal Gland is a cone-shaped pea that sits on the roof of the 3rd ventricle of the brain, directly behind the root of the nose (3rd eye chakra) floating in a small lake of cerebrospinal fluid. Instead it relies on a constant supply of blood via, considering its miniscule size, a particularly rich vascular network. It acts as a receiving mechanism capable of monitoring electro-magnetic fields and helping align bodies in space. The pineal gland is unique in that it sits alone in the brain whose other parts are paired. The pineal gland begins to harden with calcified tissue starting at adolescence. Source : Bridge Of Stars Related Articles :

Ancient Wisdom Rising Enlightenment « Finding the li Supposing we all learned to view the universe like Einstein saw it? Wouldn’t that lead to a very different world? Now, I’m not suggesting that any of us can ever hope to have the genius that Einstein possessed, but it’s possible that the traditional Neo-Confucian approach to understanding the universe (that I’ve described in earlier posts) might offer a few insights into seeing the same natural wonder that Einstein saw all around him. Albert Einstein saw no distinction between science and religiousness. Albert Einstein saw no distinction between science and religiousness. Well, that may have been the case for Einstein himself, but it certainly hasn’t been true for most scientific voices of the past few hundred years. Bacon’s favorite metaphor of the natural world was that of a powerful woman who needed to be conquered and subdued. I am come in very truth leading to you Nature with all her children to bind her to your service and make her your slave.[3] [1] Quoted by Ravindra, R. (2008).

All Religions are One One of two known impressions of the title page from All Religions are One, printed c1795 All Religions are One is the title of a series of philosophical aphorisms by William Blake, written in 1788. Following on from his initial experiments with relief etching in the non-textual The Approach of Doom (1787), All Religions are One and There is No Natural Religion represent Blake's first successful attempt to combine image and text via relief etching, and are thus the earliest of his illuminated manuscripts. Relief etching[edit] Page 2 of The Ghost of Abel (1822); note the writing in the colophon at bottom right. Frustrated with this method, Blake seems to have begun thinking about a new method of publishing at least as early as 1784, as in that year a rough description of what would become relief etching appears in his unpublished satire, An Island in the Moon. Blake could also colour the plates themselves in coloured inks before pressing them or tint them with watercolours after printing.

7 Ways To Discover Your Life Purpose Written by my friend Amateo Ra| Living a life of purpose is a key essential ingredient for happiness. So many people all over the World are realizing they can’t just work some dead end, unfulfilling job that doesn’t nourish the soul. We are also realizing we perform our best when we are doing something we like and are naturally good at. Imagine a World where everyone is living their life-purpose – doing what they love. So here’s a start, 7-Ways to Discover Your Life Purpose: 1) Consider Your Highest-Excitement So often we can get stuck in the motions of life without stopping to consider what truly fulfills us, makes us happy and excites us to our very core. Once you have done that, take a look at your list. I often say, if I’m living my life-purpose I feel like I’m thriving, and if I’m not, I feel like I’m dying. 2) Pay Attention to How You Spend your Spare Time What do you do when no one is watching? 3) Consider What You Loved to Do as a Kid – Who did you like to hang out with?

Your Soul’s Plan: 4 Myths & 4 Keys To Living On Purpose Every person is ‘built for a purpose’. Just like a building is planned or software is designed to meet the a specific need, we are made to fulfil a unique plan. Right down to our body type, our likes and dislikes, our genetic code and our talents. It’s all part of a bigger plan our soul has for us. Do You Know What Your Soul Has Planned For You? For a long time, I resisted my soul’s plan. Basically, I was terrified that my soul would lead me to do something that I couldn’t handle, or that I wouldn’t like, or that would mean I lost all the comforts I was accustomed to. I couldn’t be more wrong! Everything really started to change when I took the leap of faith to leave my full-time job and commit to exploring what my soul had in store for me. The 4 Myths Of Living On Purpose There are a few things you need to look out for when it comes to living your soul’s destiny: 1. 2. 3. 4. Your Soul Has A Plan For You When your ego makes decisions in your life, they are generally decisions based on fear.

Symbols of Love and their deeper Meaning Love Symbols Love Symbols and Signs Self-Development, Relationships, Spiritual Development, Symbols and Signs Love Symbols and Their Meaning Love knows no boundaries. Symbols of Love connect us to the Force of Love and its Eternal Wisdom Heart as a Symbol of Love We somehow naturally start with the heart as a symbol of love. It is interesting that the image depicted on the coins was the heart shaped seeds of a plant called Silphium, a type of fennel, that was used as a herbal contraceptive. The Greeks believed the plant was a gift from Apollo. The heart shape was most likely first associated with sex, and later with love... One of the first known depiction of a heart as a symbol of romantic love dates back to the 13th century. It is found in a French manuscript where a kneeling lover offers his heart to his lady. The heart shape is also formed by the heads of two doves in love, an animal associated with Aphrodite, the Greek Goddess of Love. Doves as a Symbol of Love Swans as a Symbol of Love Rose

Arts make students smart When children are physically active and creative, they tend to focus better and work more enthusiastically with the rest of the curriculum. Arts, sport, music and drama are often viewed as fun extra-curricular activities for children but are given less importance compared with core subjects such as English, science, or mathematics. The arts should be taken seriously as a source of inspiration, as a way of life - Nataša Pantović Nevertheless, numerous studies prove that practising arts, music and sport from an early age improves brain activity, self-confidence, and gives students an overall sense of well-being. Students who consistently prac­tise sport, arts, music, drama, and dance, are usually more creative and innovative and also perform better academically. Physical education programmes can influence the way children view physical fitness when they grow older, how they relate to their body and overall health. Many team sports require children to work together to achieve a common goal.