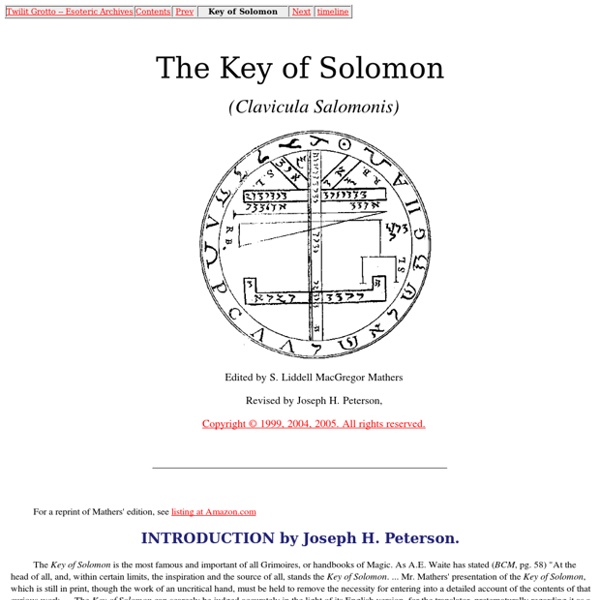 For a reprint of Mathers' edition, see listing at Amazon.com INTRODUCTION by Joseph H. Peterson. The Key of Solomon is the most famous and important of all Grimoires, or handbooks of Magic. As A.E. Mr. It is true that the Mathers edition would not be considered critical by modern standards of scholarship (but Waite's editions of various esoteric texts leave far more to be desired than Mathers'). Of course, none of the manuscripts used by Mathers qualify as "ancient" or even "medieval"; the oldest is probably 16th century. Mathers' translation is almost entirely dependant on French Colorno manuscript exemplars dating 18th century. In addition, Mathers made significant use of Lansdowne 1202, even though he pronounces it "more concise in style." Also heavily used by Mathers was LES VÉRITABLES CLAVICULES DE SALOMON, Traduites de l'Hebreux en langue Latine Par le Rabin ABOGNAZAR (Lansdowne MSS 1203.) Sloane 1307 is in Italian, and is also ca. 17th century. Greek Latin Italian English Hebrew French Related:  Magick and Alchemy

Ouroboros - Fullmetal Alchemist Wiki - Wikia Ouroboros refers to the ancient mystical symbol representing a dragon devouring its own tail. It represents the eternal cycle of life and death. The circular affinity suggests the eternal cycle of life death or death and birth that happens to each life born. The head of the dragon represents life, while the tail as it is being bitten represents the end of life, the circular motion shows the perpetual cycle of life and death as the dragon consumes its tail. Before learning of their identities as Homunculi, Edward referred to the individuals behind the odd circumstances in Amestris as "Members of the Ouroboros". Locations of Ouroboros tattoos Edit In all versions of the story: Edit Lust's Ouroboros is located on her upper sternum, just above her breasts. In the manga and 2009 anime: Wrath's Ouroboros is located on his left eye (same as Pride in the 2003 anime). In the 2003 anime only: Trivia

Color Wheel - Color Scheme Randomizer - Color Theory for web designers Are you about to give up? Just can't find the right colors for your page? Well, here is the solution for you! Spin the color wheel and get a selection of three random colors. The color wheel randomizes among some 16 million colors. So, are we just leaving our color selection to chance? You will probably be surprised by how often you will get combinations that look very pleasing to the eye. I think one good thing about this approach (as opposed to sitting down before a blank monitor to think about what colours to use) is that you never know what is going to show up. Just keep in mind that the colors are seen against a neutral background and that they are displayed in small areas.

Rock Key The Rock Identification Key - by Don PeckRock Key Table of Contents What Are Rocks? Rocks are what the crust of the earth is made of. They are the mountains and the bottom of the ocean. They are everywhere on earth, but often buried under soil. [ Return to Rock Key Table of Contents ] What Minerals Form Rocks? theomagica - On Crossing the Abyss The experience of Crossing the Abyss is triggered by a liminal rite and results in a series of liminal experiences in our everyday lives. It describes nothing other than the actual process of crossing the Abyss, i.e. the passing over the visionary threshold that lies between creation and divinity - as well as hopefully a safe return of the practitioner into creation. The term is not specific to a particular rite or tradition of magic but describes an underlying pattern of human existence: When we cross from creation to divinity we are stripped bare of all created forms that we hold as part of our own being: our body, our ego, our memories, our mind, etc. What passes through to the other side of the threshold is the individualised spark of divinity that we carry within ourselves. Rather than the crossing itself, it’s the process of re-integration into the world of creation upon one’s return that can be the even more problematic and painful experience. It was a pretty full on year.

Common Invention Recipes - Paragon Wiki From Paragon Wiki Common Invention Recipes are recipes that are used to create common Invention Origin Enhancements, which enhance one attribute per enhancement and have no set bonuses. They are available every five levels between levels 10 and 50. They can be obtained by defeating mobs, buying them at an Invention Worktable (usually found in a University or Base), or from memorization badges. Each time you craft one of these recipes, it counts toward a memorization badge, depending on the enhancement's level, as specified in the recipe sections. Additionally, crafting any recipe, common or otherwise, counts toward the Artisan, Master Artisan, Craftsman, Master Craftsman and Fabricator badges. The cost to craft an enhancement from a recipe is printed on the recipe. An Invention Cheatsheet is also available which shows the relationships between recipes and their salvage for the three "tiers" (levels 10-25, 30-40, and 45-50). Accuracy See also: Invention: Accuracy Confuse Invention: Confuse Fear

Alchemy Index Sacred-texts home Esoteric Buy CD-ROM Buy Books on Alchemy Although the alchemists' fundamental goal of elemental transmutation was flawed, on a deeper level the work of alchemy (cloaked in allegorical images) also represented the transformation of the soul. Modern science has accomplished the transmutation of elements using means that the alchemists never dreamed of. The Hermetic Museum: Volume I Volume II tr. by Arthur Edward Waite [1893]A completely new scan of this key collection of Alchemical tracts. Alchemy Rediscovered and Restored by A. Collectanea Chemica ed. by A. Triumphal Chariot of Antimony by Basil Valentine Golden Chain of Homer Emerald Tablet of Hermes Glory of the World The Six Keys of Eudoxus Freher's Process in the Philosophical Work The Golden Tractate of Hermes Trismegistus The Hermetic Arcanum Hortulanus' Commentary on the Emerald Tablet The Stone of the Philosophers by Edward Kelly Mary the Prophetess An Alchemical Mass The Mirror of Alchemy On the Philadelphian Gold A.E.

HEROICA! Way Cool Binds & Macros List The above is a single pair of binds from the set of 5 (or 10) that you need to implement automatic cycling of the four "Prestige Sprints" you get as a Veteran's Reward. With 4 cool sprinting animations to choose from, plus the basic Sprint, there's no reason to pick just one. Each bind resides in its own sub-bindfile. When you press CTRL+R to cycle the sprint mode, it activates the currently selected mode and then loads a bindfile fragment to overwrite the command, ready for the next toggle. Each time you press CTRL+R, you'll get a different sprint animation. If you use R to toggle autorun off and on while forcing on your fast-motion move (Sprint or Super Speed), you can choose whether this bind modification overwrites that or not. To implement this bind, download the archive file of bind fragments by clicking HERE. Now, open each character's bindfile (you DO keep them separate, right?) Have fun showing off!

Key to Evocation: Zodiacal Decans I have previously published this article on the e-zine, Rending the Veil, and I thought that it would be useful to post it here for my readers to examine, just in case they didn’t catch it. This article represents the core principle that I use in establishing the hierarchical structure and methodology of performing theurgy and goetic evocation. Matrix of Possibilities There are many ways to perform the operation of theurgy and the evocation of spirits. Ever since I first examined the Goetia of the Lemegeton, or Lesser Key of Solomon, I have been fascinated by those entities called Goetic Demons, but found the methodologies for invoking them to be too abbreviated and incomplete to be entirely useful to me. However, when I first read Aleister Crowley’s Book of Thoth and also studied Israel Regardie’s The Golden Dawn (specifically, Book T) there seemed to be a new structure implied that might associate the Tarot, Astrology, Qabbalah and the hierarchy of Spirits into one unified system.

Emotes - Paragon Wiki From Paragon Wiki Overview Emotes are short animations a player can use to express various body-language signals in-game. Some of them are purely for fun, and some are actually useful, such as the coin toss, the die, and the "rock/paper/scissors" to make decisions. Several of the emotes are accompanied by a sound, which is noted in the description below. Some emotes have synonyms which carry out the same animation. Normal Emotes This is a list of known emotes. Boombox Emotes While the boombox (or bb) emote will drop a boombox and play a random song, one may select a specific song to play with the following emotes: Unlockable Emotes In-Game Action The following emotes are unlocked by the listed in-game action or event. Super Booster I: Cyborg The following emotes are all unlocked by purchasing Super Booster I: Cyborg, or the Cyborg Costume Set at the Paragon Market. Super Booster II: Magic Super Booster III: Superscience Super Booster IV: Martial Arts Super Booster V: Mutant Wedding Pack Party Pack

Quareia The methods, information and techniques in the course enable the magician to engage any form of magic and work with it appropriately with the full knowledge of how that magic works, why it works and what is behind it. The curriculum of Quareia goes into great practical and technical depth of all magical technique, and for the most part is magical education that does not appear in any books, anywhere. This is the training that is normally behind closed doors. The training is rooted in ancient magical traditions from a modern perspective, and is designed in absolute detail to ensure a complete and balanced training. The construction and presentation of the course, and the fact that it is free and will remain free, ensures that anyone who wishes to commit the time, focus and energy to the work will be able to do it. It will not be hijacked, will not become commercial, and will not become something exclusive. No Quareia student can buy their way to adept- ship, and there are no shortcuts.