Parmesan Zucchini with Whole Wheat Bread Crumbs. My mom used to make zucchini like this every summer when I was little. 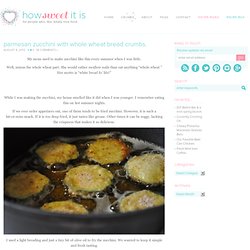 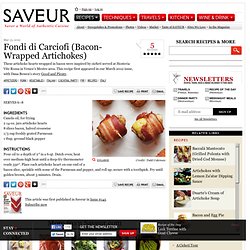 Broccoli parmesan fritters. Last week, it was pointed out to me that among the 750 recipes in the archives, there is but a single recipe that utilizes broccoli. 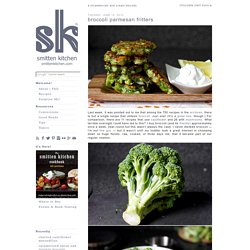 Just one! (It’s a great one, though.) For comparison, there are 11 recipes that use cauliflower and 26 with mushrooms. What terrible oversight could have led to this? I buy broccoli (and its friends) approximately once a week, year-round but this wasn’t always the case. Please understand: this is not one of those stories about how preciously advanced my toddler’s tastes are, how early he took an interest in foie gras and how he turns his nose up at white flour pastas, preferring farro. I have a theory that you can tuck almost any finely chopped or shredded vegetable — be it potatoes, zucchini, or an Indian-spiced mix — into a savory pancake, fry it in small mounds until crisp on both sides, serve it with a dollop of a sour cream or yogurt sauce and they will be inhaled. So, you know where this is going.

Sautéed Radishes with Fava Beans. Radishes are sautéed with fresh fava beans and finished with chopped parsley and chives. 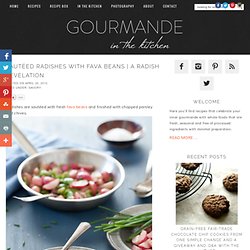 Isn’t it peculiar how there are some vegetables we never think to eat raw and others we never think to eat cooked? Asparagus and eggplant, for example, I always think to cook while lettuce and radishes I generally serve up raw. But it doesn’t have to be so; these vegetables have more to offer. Following on the heels of last week’s raw asparagus salad, I decided I should cook my radishes. I never think to eat them that way because most of the time fresh spring radishes end up slathered with the best butter I can find and finished off with a flurry of fleur de sel. Cooking radishes softens their pungent bite and gives them a buttery texture with a delicate flavor. Butter continues to be their perfect foil, this time helping to caramelize the edges of the cut radishes in the pan.

And since spring is in full swing I added the quintessential spring vegetable to the mix: fava beans. Ingredients Instructions. Asparagus with almonds and yogurt dressing. One of the things I love about my city is the way we jump at the chance celebrate local events as unofficial, illogical holidays, just because. 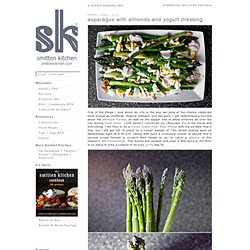 I get redorkulously excited about the Mermaid Parade, as well as the dapper sea of white uniforms all over the city during Fleet Week. I still haven’t convinced my (Russian! It’s in his blood and everything, I tell him) to do a Coney Island Polar Bear Plunge with me on New Year’s Day, but I did get him to stand on a center median of 14th Street looking west on Wednesday night at 8:16 p.m. 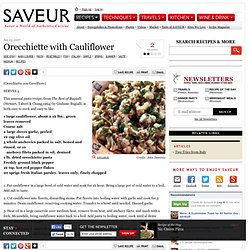 Put cauliflower in a large bowl of cold water and soak for 1⁄2 hour. 2. 3. 4. Marinated Roasted Cauliflower Salad. April 24, 2012 | By Adam Roberts | 15 Comments Lately I’ve been thinking a lot about sponges. 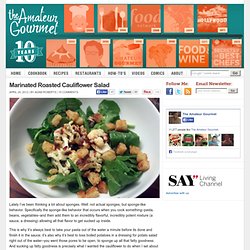 Well: not actual sponges, but sponge-like behavior. Specifically the sponge-like behavior that occurs when you cook something–pasta, beans, vegetables–and then add them to an incredibly flavorful, incredibly potent mixture (a sauce, a dressing) allowing all that flavor to get sucked up inside. This is why it’s always best to take your pasta out of the water a minute before its done and finish it in the sauce; it’s also why it’s best to toss boiled potatoes in a dressing for potato salad right out of the water–you went those pores to be open, to sponge up all that fatty goodness.

And sucking up fatty goodness is precisely what I wanted the cauliflower to do when I set about making a marinated cauliflower salad. Traditionally, that’s done by boiling the cauliflower until just al dente and then adding it to a dressing. That’s really easily done: no recipe required. Meanwhile, make your dressing. Roasted Red Peppers Stuffed with Kale & Rice Recipe at Cooking.