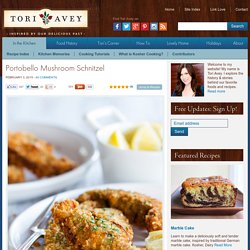 Irresistible! A few years ago, after lots of trial and error, I developed a truly amazing batter coating for fried foods. Vegan aquafaba Yorkshire puddings...Based on what was posted before with a few mods: 165g aquafaba, 200g flour, 1 t salt, 1/2 t black salt, 1 heapi… 61. Vegan Yorkshire Puddings (that don’t suck!) I think I finally did it I think I finally invented a vegan Yorkshire Pudding recipe that doesn’t suck!!! 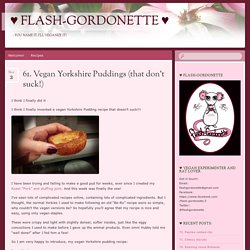 I have been trying and failing to make a good pud for weeks, ever since I created my Roast “Pork” and stuffing joint. And this week was finally the one! I’ve seen lots of complicated recipes online, containing lots of complicated ingredients. Raw or Baked: Crispy Eggplant “Bacon” I spent many years eating meat, and the only one that I miss (flavor-wise) is bacon. 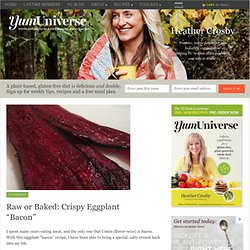 With this eggplant “bacon” recipe, I have been able to bring a special, salty crunch back into my life. You can prepare this recipe two ways, either enzyme-rich and raw (optimal, and shown above) or baked at a low temp in the oven. Brussel Sprout Fried Rice. February 27, 2014 Brussel Sprout Fried Rice by IsaChandra Serves 4 Total time: 30 minutes || Active time: 30 minutes. 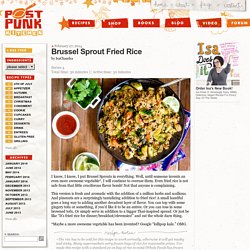 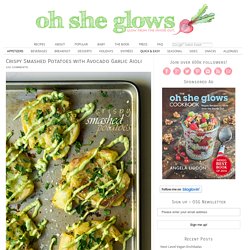 Yukon Gold potatoes are boiled, smashed, roasted until crispy, and then topped with a decadent, yet heart-healthy, avocado garlic aioli. Be still my heart. MOONBLUSH TOMATOES. Golden Cheddar’d Potatoes. These roast potatoes are probably the most delicious potatoes on the planet – okay, may be they’re not, but they come pretty close. 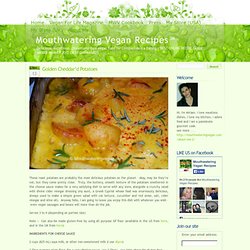 Truly, the buttery, smooth texture of the potatoes smothered in the cheese sauce makes for a very satisfying dish to serve with any stew, alongside a crunchy salad with divine cider vinegar dressing (my aunt, a Greek Cypriot whose food was enormously delicious, always used to make a simple green salad with cos lettuce, cucumber and red onion, salt, cider vinegar and olive oil). Anyway folks, I am going to leave you enjoy this dish with whatever you wish – even vegan sausages and beans will more than do the job. Serves 3 to 4 (depending on portion size) Note :- Can also be made gluten-free by using all purpose GF flour (available in the US from here, and in the UK from here) 2 cups (625 mL) soya milk, or other non-sweetened milk (I use Alpro) 2 Tbsp purpose plain flour (for a very thicker sauce, use 3 Tbsp) – see links above for gluten free flour ¼ cup water salt. 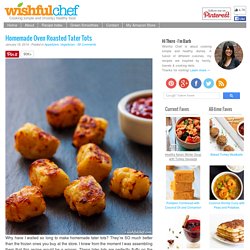 They’re SO much better than the frozen ones you buy at the store. I knew from the moment I was assembling them that this recipe would be a winner. Tofu Scallops. I only tasted scallops once and they tasted like rubber. 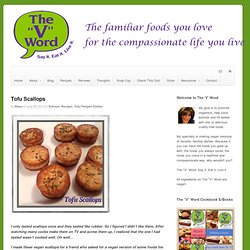 So I figured I didn’t like them. After watching many cooks make them on TV and screw them up, I realized that the one I had tasted wasn’t cooked well. Oh well… I made these vegan scallops for a friend who asked for a vegan version of some foods his father liked. Vegan Popcorn Chicken. The popular golden, crunchy, bite sized popcorn chicken goes all vegan in our kitchen. 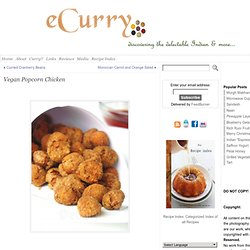 A hot favorite with the kids and adults is the popcorn chicken; you get it in a cup in various fast foods – great finger foods for snacks or on the go. Arjun came up with this vegan versions and I bet it tastes as good as the real chicken. We have used the soy proteins/TVP here, commonly known as Nutrela and easily available in all Indian grocery stores as nuggets or granules. The nuggets work best for this recipe. We have double coated the nuggets for a thicker and crunchier outside; do it once if you are lazy or do not need a thick and crunchy coat. 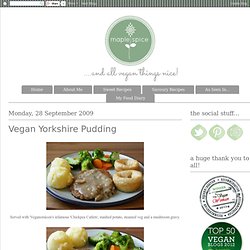 I was going to post this a Sunday roast but really it's the Yorkshire puddings that I'm focusing on here! I have tried a few of these before, I can get them to rise a bit but something was always not quite right. I'm very happy with these ones though, only problem is their bottoms didn't get fully cooked, they are a little gummy there. I didn't mind it though and as they don't contain any egg - not a health problem ;) I based this one on my mom's popover recipe, popovers are an American thing (mommy's American :)) but very similar to Yorkshire puddings.

I also absolutely love the chickpea cutlets from Veganomicon, I know they are all over the vegan blogging sphere and rightfully so! Place 1/2 tsp of oil into each of the 8 muffin tin holes and place the tin in the oven. Melt the marg in a saucepan and fry the onion gently until golden, add some black pepper. Cooking with Myagi - Making Soy Free (Chickpea) Tofu. Baked Chili Cheese Fritos. One of my favorite foods growing up was frito chili pie. I know, so not healthy – guilty as charged. But so good! Loads of crunchy, salty fritos topped with hearty chili and handfuls of cheese – so delicious.