Best Mexican Chopped Salad Recipe (2021) Quick & Healthy. Rice Cooker Spanish Rice Recipe. The recipe is too much for my older rice cooker so I made it on the stove in a large sauce pan. it was very difficult to keep the rice from sticking-- if I made it again I would cut the chili powder and cumin in half. 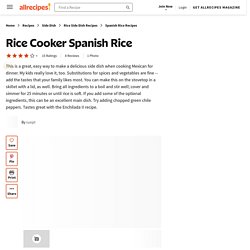 Just OK. This WILL NOT work in an 8 cup rice cooker. We transferred it to the stove but it couldn't be salvaged. I give it 3 stars because it has potential. We are going to cut the recipe in half and try it again. I used brown rice instead of white, took forever to get soft. Followed exact ant rice was still raw! Unfortunately, there wasn't enough liquid to cook the rice. I am cooking this for 2 hours rice is still not cooked... i cooked it in the rice cooker for 90 min rice is hard as uncooked... Frijoles especiales. If you are heading to South Padre Island, you will drive through Brownsville. 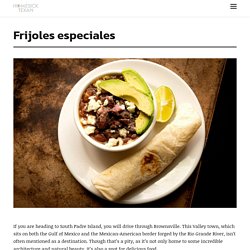 This Valley town, which sits on both the Gulf of Mexico and the Mexican-American border forged by the Rio Grande River, isn’t often mentioned as a destination. Though that’s a pity, as it’s not only home to some incredible architecture and natural beauty, it’s also a spot for delicious food. The first time I visited, I was scouting for my queso book. While chile con queso doesn’t have a huge presence in the town, the taquerias are abundant. And one dish . . . Thank you for reading! This is a premium post available to subscribers only. Thank you for your consideration! Frijoles de puerco. When it comes to comfort food, refried beans are at the top of my list. 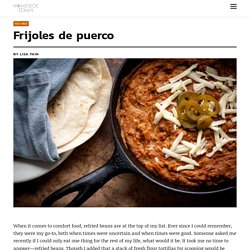 Ever since I could remember, they were my go-to, both when times were uncertain and when times were good. Someone asked me recently if I could only eat one thing for the rest of my life, what would it be. It took me no time to answer—refried beans. Though I added that a stack of fresh flour tortillas for scooping would be welcome as well. My recipe for refried beans is inspired by one I used to enjoy at the late and lamented Austin Tex-Mex stalwart, Las Manitas. One day I called the restaurant and asked if they’d share with me their secrets. A few years ago, however, I began to hear about a style of refried beans that are found in Mexico. Like the refried beans from Las Manitas, a base of bacon grease is often used, though sometimes lard is used in its place.

Depending on the region that the frijoles de puerco are made, other ingredients such as tuna and olives might be included. Fancy green bean casserole. Earlier this year, I went to a Mexican restaurant that had fried green beans on the menu. 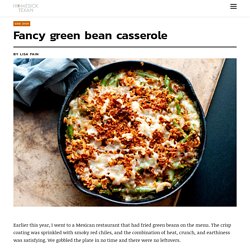 The crisp coating was sprinkled with smoky red chiles, and the combination of heat, crunch, and earthiness was satisfying. We gobbled the plate in no time and there were no leftovers. Now, at some point, I’d like to recreate those fried green beans, though as we approach Thanksgiving my mind instead turns to that famous side dish, the green bean casserole.

If your family is like mine, then this is not only a required accompaniment to the meal, but chances are the . . . Thank you for reading! Thank you for your consideration! Frijoles Charros (Mexican Pinto Beans With Bacon and Chilies) Recipe. Mexican Green Salad with Jalapeño-Cilantro Dressing. Mexican Three Bean Salad. Jalapeño dill potato salad. Green chile hominy casserole with chorizo. My grandma thinks I am incapable of making any recipe without chile peppers. 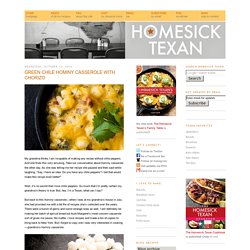 And she finds this very amusing. Take our conversation about hominy casserole the other day. As she was telling me her recipe she paused and then said while laughing, “Say, I have an idea. Do you have any chile peppers? I bet that would make this recipe even better!” Well, it’s no secret that I love chile peppers. But back to this hominy casserole—when I was at my grandma’s house in July, she had provided me with a fat file of recipes she’s collected over the years. Hominy casserole, which at it’s most basic is simply a mixture of hominy with sour cream and cheddar cheese, is an old-fashioned Southern side dish you don’t see that often anymore. Grandma’s hominy casserole is the classic rendition of the dish, though she also shared with me one that was a bit more gussied up with olives and pimentos. Green chile hominy casserole with chorizo Preheat the oven to 350° F. Yield:4 to 6 sevings Author:Lisa Fain.

Pinto bean and hominy salad. Since I don’t have a backyard in New York, I’ve always had to rely on the kindness of others when it comes to outdoor dining. 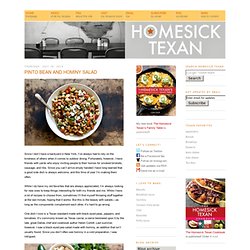 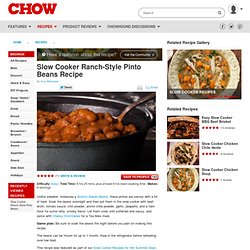 Soak the beans overnight and then put them in the slow cooker with beef broth, tomato sauce, chili powder, ancho chile powder, garlic, jalapeño, and a ham hock for some fatty, smoky flavor. Let them cook until softened and saucy, and serve with Cheesy Enchiladas for a Tex-Mex meal. Game plan: Be sure to soak the beans the night before you plan on making this recipe. The beans can be frozen for up to 1 month; thaw in the refrigerator before reheating over low heat. This recipe was featured as part of our Slow Cooker Recipes for Hot Summer Days. Mexican Rice. Beans and rice. 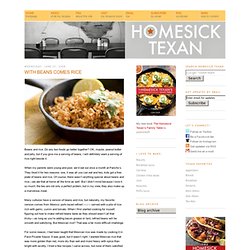 Do any two foods go better together? Refried Black Beans Recipe. This recipe gives instructions for making refried beans from scratch, starting with dry beans which must first be cooked. 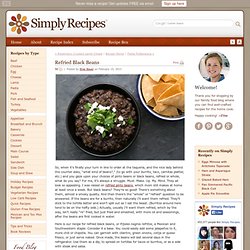 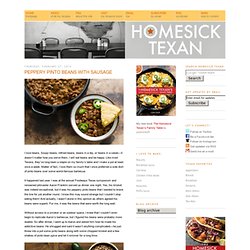 Soupy beans, refried beans, beans in a dip, or beans in a salad—it doesn’t matter how you serve them, I will eat beans and be happy. Like most Texans, they’ve long been a staple on my family’s table and I make a pot at least once a week. Matter of fact, I love them so much that I once preferred a side dish of pinto beans over some world-famous barbecue. It happened last year. I was at the annual Foodways Texas symposium and renowned pitmaster Aaron Franklin served us dinner one night. Jalapeño cheese grits.