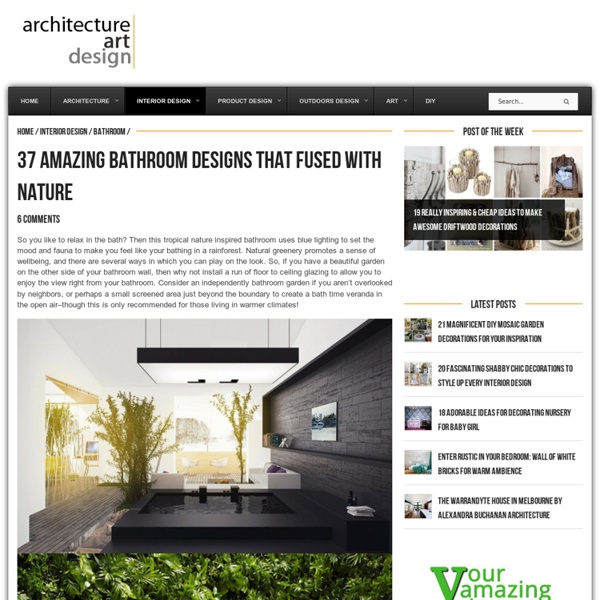 So you like to relax in the bath? Then this tropical nature inspired bathroom uses blue lighting to set the mood and fauna to make you feel like your bathing in a rainforest. Natural greenery promotes a sense of wellbeing, and there are several ways in which you can play on the look. Tags: bathroom, interior design, natural bathroom, nature

At First, I Felt Sorry For The People Who Live In This House. Then I Looked Closer...Now I'm Jealous Over the years, house sizes in the United States have been doubling. However, couples like Christopher Smith and Merete Mueller have been realizing that size isn’t the most important thing about where you live. Instead, they, and others in the “small house movement,” know that efficiency and green living can be more important. Christopher and Merete had no building experience, but they knew what their foundation would be… literally. Nonetheless, they decided to build their dream home. And it was going to be tiny. It look a lot of trial and error, but the couple kept an open mind. Their little house could go almost anywhere. But they decided to settle down outside of Boulder, Colorado. When Christopher decided to settle down, he tried to think of what would be inside of his dream home. It turns out, all that he required were necessities. They are part of a “tiny house movement.” Building their house on a flatbed trailer was a bit of a trial. They ended up getting pretty good at it.

Favourite Cat Quotes through Time Man has always been intrigued and fascinated with the cat so it's not surprising that there are so many cat-related quotes throughout time. This is a selection of some of my favourite quotes that I have collected over the years that I know all feline lovers will enjoy. This page will be updated with new quotes from time to time so please feel free to come back again soon! "In the beginning, God created man, but seeing him so feeble, He gave him the cat "A home without a cat- and a well-fed, well-petted and properly revered cat- may be a perfect home, perhaps, but how can it prove title?" "If animals could speak the dog would be a a blundering outspoken fellow, but the cat would have the rare grace of never saying a word too much "A cat is more intelligent than people believe, and can be taught any crime." "I simply can't resist a cat, particularly a purring one. "Of all God's creatures there is only one that cannot be made the slave of the leash. "Dogs come when they're called.

Inside Mike D's Brooklyn Townhouse Mike Diamond - the founding member of the Beastie Boys - recently let The New York Times have a snoop around his spacious 3,200-square-foot Brooklyn townhouse, which he shares with his wife Tamra Davis and their two sons. The couple have now been living in the house for a year and a half, following from an extensive $500,000 six month long renovation process. Prior to moving, the family lived in a TriBeCa loft, but speaking to the NYT the couple say the change was worth it. Their older son can now walk home from school by himself, something which Mike D was never able to do growing up on the Upper West Side of Manhattan. "It was traumatic," he said. www.nytimes.com

Tesla Hyperloop Train Can Travel At 4000 mph Billionaire entrepreneur Elon Musk has revealed more information on his top-secret Hyperloop, a vehicle he says will take passengers from Los Angeles to San Francisco in a mere half hour. The Tesla Motors co-founder called the fast train “a cross between a Concorde and a railgun and an air hockey table” at the D11 Conference earlier this year. The pneumatic tube train system will be “twice as fast as what an average aircraft can do.” Once constructed, the Hyperloop will leave as soon as passengers board as opposed to running on a strict schedule. Some are calling Musk’s idea pure insanity, but others including physicist Brian Dodson of Gizmag, are willing to give the Hyperloop a chance after examining all of its parts. Dodson ruled out two theories that the Hyperloop will use a vacuum tunnel or a launch loop that accelerates vehicles electromagnetically along a cable system. English please?

I Love Coffee - - A blog for coffee lovers. 20 of the Sneakiest Secret Doors (list) Hidden Doors and Secret Passageways are always a cool amenity to any house. Not only does provide mystery to your living quarters, but it also allows for a bit of privacy. Hidden doors and secret passageways seem to be a popular room addition since there are numerous companies on the web who specialize in such requests, like The Hidden Door Company, Creative Home Engineering and Hide A Door. Of course, you can easily get the typical hidden door in a bookcase, but we’ve found some pretty interesting ones below! 20. Mirror Secret Door This one is crazy! 19. Just because it looks like a dead end doesn’t always mean there’s nothing behind it… 18. This is the best place to keep that stack of cash or gold bars you don’t want the Uncle Sam to get their hands on! 17. This is one of the most famous hidden doors in history (at least to us). 16. 15. A hidden room under a set of stairs is definitely an unusual idea. 14. 13. This is seriously something out of the game Clue! 12. 11. 10. 9. 8. 7. 6. 5.

30-Something Everyday Tasks You Might Be Doing 'Wrong' My breakfast this morning — blown, not peeled. Matt Thompson hide caption itoggle caption Matt Thompson My breakfast this morning — blown, not peeled. Matt Thompson I prepared my breakfast of hard-boiled eggs a bit differently this morning. This egg-peeling trick, demonstrated below by Internet-famous life hacker Tim Ferriss, was one of dozens posted to the question-and-answer site Quora, in response to the question, "What are common activities people do wrong every day but don't know it?" While many of the 30-something videos listed deal with food prep, the full list covers a fun variety of everyday activities, including adjusting your rearview mirrors, popping a zit and taking off a T-shirt. I've long been utterly certain I could never be a credible beat-boxer. I wash my hands several times a day, so "shake and fold" has been a revelation: Not all the tricks I sampled worked for me on the first try, though. And of course, there's more than one way to peel an egg.

Water Balloon Luminaries : Candle & Soap Making Techniques A fun and easy project with a beautiful payoff. Learn how to make these Balloon Luminaries. You will need: High-Melt Paraffin Wax (IGI 1260)Party BalloonsDouble BoilerCookie Sheet Instructions: 1. 2. 3. 4. 5. 6. 7. 8. 9. 10. Here is an example of these luminaries when using dye. 20 Signs You Grew Up a Church Kid | Chasing Supermom *This post contains affiliate links. Clicking on the link and making an Amazon purchase helps support my family. Thanks in advance! I grew up a church kid. My husband was raised on the opposite side of the country, and grew up in a different denomination. And yet, in spite of all of these wonderfully cheesy things, I remain a person who clings to her faith, loves Jesus, and loves her church. So, sit back, pop in some Steven Curtis Chapman or Geoff Moore and the Distance, throw some cocoa in your dad’s Promise Keeper’s mug, and enjoy this trip down memory lane. 1. *Bonus points if you can sing Bullfrongs and Butterflies and/or the “Arky Arky” song! And now I’m singing, “The Lord told Noah, there’s gonna be a floody floody….get those animals out of the muddy muddy.” 2. Straight up – I challenge anyone – any day – anywhere. 3. 4. 5. 6. 7. Superbook! or this….McGee and Me! 8. *Bonus points – You sang worship songs “in a round” around said campfire. 9. 10. 11. 12. 13. 14. 15. 16. 17. 18. 19.

Zaha Hadid Chosen to Design Iraqi Parliament Tower in Baghdad Zaha Hadid has been selected to design the new Iraqi Parliament building in Baghdad. The controversial decision comes after London-based Assemblage was crowned as winner of a RIBA-led competition for the building, which place Hadid’s proposal third. Though a dispute began once the competition’s client sparked conversations with Hadid after the winning firm was named, the client stated that competition rules allow for any shortlisted design proposal to be ultimately chosen for construction. Former RIBA president and competition jury member Sunand Prasad backed the client’s claim, stating: “Obviously we selected a winner, therefore we would like to have seen it [built] but the client reserved the right to pick any of the top three and they have gone ahead and done that.” The £630 million building will be built on a 20 hectare site in West Baghdad, which was originally used by Saddam Hussein to partially construct a super mosque. Reference: The Architect’s Journal

Melt Them Down! Recycling Old Crayons Gather up your old crayons - short ones, long ones, fat ones, skinny ones. It doesn't matter what shape or color they are because we are just going to melt them down. They can be Crayola or Rose Art or even the crayons that you get at a restaurant. You will need a handful to make a new crayon, if you look at this picture, you can see about how many it will take to make a new chunky crayon. These crayons have already been peeled, but if yours have wrappers then you will need to remove all of the paper before you can get started. You don't have to sort them by color, but I suggest it.

SpY Transforms Vine-Covered Wall Into Beautiful Botanical Graffiti SPY Green Graffiti - Gallery Page 7 Spanish artist SpY enlivened a vacant wall in Besancon, France with a geometric feat of botanical graffiti! The urban artist's careful pruning gave a vagrant patch of vines a new circular shape, turning the site into a living artwork that locals now take pride in preserving. SpY’s gorgeous living artwork is made from strands of leafy vines that once reached upward toward the sun in unkempt spurts. Seeing these wild vines as a canvas, SpY hired a cherry picker manlift and started to carve a circular shape into the far reaches of the overgrowth. Careful to maintain the main branches, he slowing trimmed away the wild vines to form a perfect circle. The leaves in the circle change throughout the year, gradating colors as the seasons transition from spring to summer and fall. Much of SpY’s work draws attention to the nuances of daily urban life, and his pieces reflect his appreciation of the individual elements that make up a city. + SpY