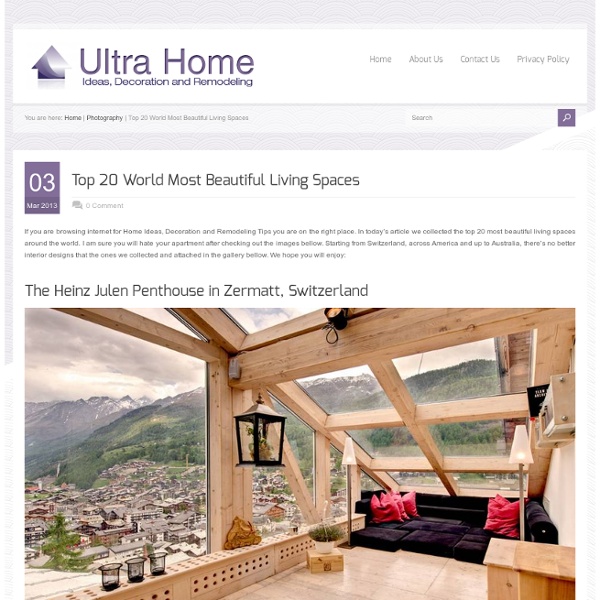 03 Mar 2013 March 3, 2013 If you are browsing internet for Home Ideas, Decoration and Remodeling Tips you are on the right place. In today’s article we collected the top 20 most beautiful living spaces around the world. I am sure you will hate your apartment after checking out the images bellow. Starting from Switzerland, across America and up to Australia, there’s no better interior designs that the ones we collected and attached in the gallery bellow. The Heinz Julen Penthouse in Zermatt, Switzerland The Clock Tower Apartment in Brooklyn, NY The Yellowstone Club in Big Sky, Montana The Firefly ski chalet in Zermatt, Switzerland Resort in St. Chalet Brickell in the Rhone-Alpes, France Converted cathedral The Over Water Bungalow at Le Meridien in Bora Bora The Igloo Village in Kakslauttanen, Finland The Ladera Resort in St. The Underwater bedroom in the Maldives The Garden House in Brazil The Pretty Beach House on the Bouddi Peninsula in Australia Jade Mountain in St. The Tree House in Costa Rica

Home Dream Home - Part 4 Turn these ideas into reality and transform your house into a home. For more inspiration check our previous collection. South African Home Is 183 Square Feet Brett RubinThe POD-indawo was designed by Johannesburg-based architect Clara da Cruz Almeida. Tiny, sustainable living is becoming a more and more attractive solution to the problems of urban living. So architects like the Johannesburg-based architect Clara da Cruz Almeida are coming up ingenious ways to make these teeny tiny spaces more livable. Almeida designed and built a tiny 183-square-foot home — called the INDAWO / lifePOD — and suited it perfectly to the warm South African climate. Brett RubinThough the livable space is small, the pod has very high ceilings, allowing for storage up along the walls and a high lofted bed. Though the square footage isn't much to work with, Almeida worked closely with Johannesburg-based interior and product design firm Dokter and Misses on the pod's clever fold-out couches, fold-down table, and enclosed storage that allow the space to transform instantaneously.

Deep Time : A History of the Earth - Interactive Infographic Life on the planet started astonishingly early. The first living organisms, in the current model of evolution, are thought to be Prokaryotes1. The oldest known fossilised prokaryotes have been dated to approximately 3.5 billion years ago, only 1 billion years after the formation of the Earth's crust. The 24 Amazing Pools You Need To Jump In Once In Your Life When is time for travel, we need to think what we will do on that trip and that can be our guide to travel destinations. This is an amazing idea for your travel plans. All of those magnificent pools are something that you need to feel and to see while you are on this planet.

20 of the Sneakiest Secret Doors (list) Hidden Doors and Secret Passageways are always a cool amenity to any house. Not only does provide mystery to your living quarters, but it also allows for a bit of privacy. Hidden doors and secret passageways seem to be a popular room addition since there are numerous companies on the web who specialize in such requests, like The Hidden Door Company, Creative Home Engineering and Hide A Door. DIY Project: Building Your Own Hobbit House With £3,000 Eco Architecture is something that generally employs cutting edge technology, unusual design, a plethora of green innovations and many sleek gadgets that promise to cut down on your energy consumption and carbon footprint. But then, most of these modern behemoths tend to forget the most important ingredient that truly brings green design to life- nature. Simon Dale of Wales had absolutely no interest in transforming himself into either an Eco-conscious architect or even a Hobbit from the movie Lord of the Rings. But when he did finish his new sustainable self-built home in Wales, he seemed to have inadvertently become both in eyes of the world! One can make all the Hobbit references when they look at this ingenious and almost picture-perfect dwelling created in a hill on the countryside by Mr.

MEME : Gratuitous Grace Aldous and I would give a (LSD) session to a friend or someone who wanted and the preparation for a session was very very careful. The day before we didnt do anything we just fixed the house very quietly, the day of the session there was nothing except that and even the day after; so there was a three day thing because as Aldous wrote in Island the session is a gratuitous grace. Its what you take away from there. A gratuitous grace, something thats given to you for nothing, not that you merit it you just are lucky and get it but what you do with it afterwards is what counts. Laura Archera Huxley