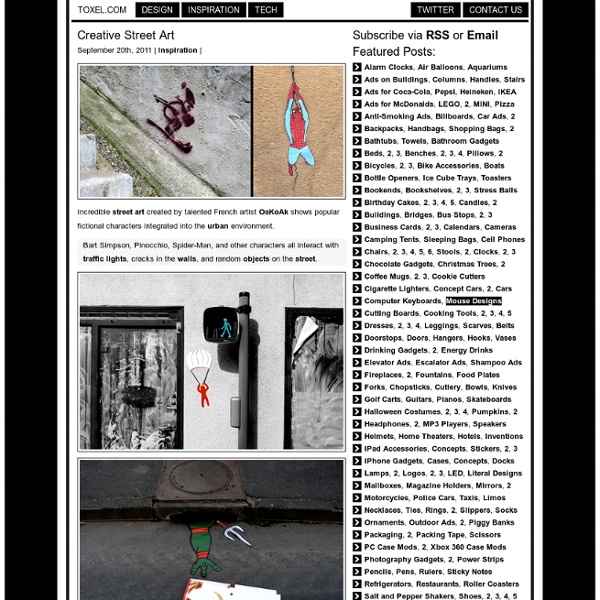 An Illustrated Book of Bad Arguments A reader recently wrote in asking if I could share a bit about the process of putting the book together and talk about how the project started. Certainly. I go on two solitary walks every day. There is a small park off the Embarcadero that is tucked away in a quiet spot. It has a pleasant stream flowing through it and an unassuming bench beside that stream. I have made walking to that frail bench a ritual, and the half an hour or so spent daydreaming on it amid the cool San Francisco breeze, an article of faith.

Phlegm: 'Calibrating The Seeing Device' (Zagreb, Croatia) Phlegm, 'Calibrating The Seeing Device', Zagreb This is on an old nuclear fallout shelter; it took 3 days to paint. See Part II of Phlegm in Croatia more by Phlegm. County Clare Page E.J. Peiker, Nature Photographer Ireland County Clare - StumbleUpon (click images for detail) For the better part of three decades multidisciplinary artist Guy Laramee has worked as a stage writer, director, composer, a fabricator of musical instruments, a singer, sculptor, painter and writer. Among his sculptural works are two incredible series of carved book landscapes and structures entitled Biblios and The Great Wall, where the dense pages of old books are excavated to reveal serene mountains, plateaus, and ancient structures. Of these works he says: So I carve landscapes out of books and I paint Romantic landscapes. Mountains of disused knowledge return to what they really are: mountains.

blind artist envisions the world through hypnotizing animated gifs 2 clicks sep 09, 2015 blind artist envisions the world through hypnotizing animated gifs blind artist envisions the world through hypnotizing animated gifsall gifs courtesy of george redhawk artist george redhawk has turned a loss into a gift — after the artist became legally blind, he began to explore the realm of photo manipulation with a desire to show the world as he sees it from his damaged sight. through the use of computer softwares that aide the visually impaired, redhawk — who works under the name darkangeløne — has realized the ongoing series of animations titled, ‘the world through my eyes’. original digital art ‘the remains of a memory’ by adam martinakis / animation by george redhawk Animal Constellation Chalk Art Paris-based Philippe Baudelocque takes chalk art to a whole new level. Drawing on a black background, his incredibly intricate animals look like constellations on a dark night. Each drawing is composed of cells, and each cell has its own pattern. With beautiful layers, these three-dimensional animals look like they're ready to jump off the city walls. Philippe Baudelocque

Everyday Objects Come Alive - Part 3 Cookie Crumbs Terry Border is one of our favorite creative people on the planet. He never ceases to amaze us, as he takes boring, everyday objects and makes them come alive! Li Hongbo Li Hongbo was born in Jilin, China, in 1974. He earned his Bachelor of Fine Arts from Jilin Normal University, Jilin, China, in 1996. He then earned his first Master of Fine Arts in 2002 from the Folk Art Department of the Central Academy of Fine Arts in Beijing and concluded his formal education with a second Master of Fine Arts from the Experimental Art Department of the same school, in 2010. Li Hongbo is best known for his interpretations of paper.