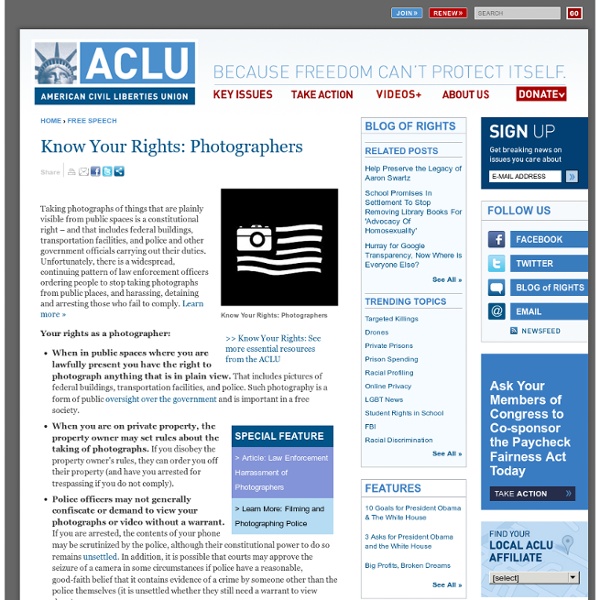 Taking photographs of things that are plainly visible from public spaces is a constitutional right – and that includes federal buildings, transportation facilities, and police and other government officials carrying out their duties. Unfortunately, there is a widespread, continuing pattern of law enforcement officers ordering people to stop taking photographs from public places, and harassing, detaining and arresting those who fail to comply. Learn more » Your rights as a photographer: When in public spaces where you are lawfully present you have the right to photograph anything that is in plain view. Using the ACLU’s “Know Your Rights: Photographers” resource, HitRecord – a collaborative artist production company – produced an animated video about the right to photograph in public, featuring music by the Gregory Brothers and directed by actor Joseph Gordon-Levitt: If you are stopped or detained for taking photographs: Always remain polite and never physically resist a police officer. Related:  Street Photography • Getting along with the Police

Sarah Stillman: The Use and Abuse of Civil Forfeiture On a bright Thursday afternoon in 2007, Jennifer Boatright, a waitress at a Houston bar-and-grill, drove with her two young sons and her boyfriend, Ron Henderson, on U.S. 59 toward Linden, Henderson’s home town, near the Texas-Louisiana border. They made the trip every April, at the first signs of spring, to walk the local wildflower trails and spend time with Henderson’s father. This year, they’d decided to buy a used car in Linden, which had plenty for sale, and so they bundled their cash savings in their car’s center console. They pulled into a mini-mart for snacks. He asked if Henderson knew that he’d been driving in the left lane for more than half a mile without passing. No, Henderson replied. Were there any drugs in the car? The officers found the couple’s cash and a marbled-glass pipe that Boatright said was a gift for her sister-in-law, and escorted them across town to the police station. “Where are we?” The basic principle behind asset forfeiture is appealing.

10 Things Not To Do As a Street Photographer (Above image “Untitled” by Christos Kapatos) I just finished reading “The Black Swan” by Nassim Nicholas Taleb, where he discusses many misconceptions and fallacies that we face as humans. He talks from a scientific-philosophical viewpoint, and has many fascinating insights. One of them was about knowledge—and that it isn’t necessarily additive—rather something subtractive. Therefore for this blog post I will share some of my insights and experiences in street photography in terms of what not to do. 1.Dont shoot standing up One of the things I always advise people against when shooting street photography is shooting standing up. Of course this depends on the situation. 2.Dont shoot street performers or the homeless Shooting street performers or the homeless are easy targets. The reason I don’t like shooting street performers and the homeless are because it is rare you will get a compelling or unique image. Of course not everything in life is black and white. 5.Don’t waste time focusing

VIDEO: Driver Questions Officer at July 4 DUI Checkpoint *So who out there can provide the best method for remedying such a travesty of justice? Michael Badnarik has gone far to educate Americans as to their Constitutional rights, so if you want to keep them please check out some of his work here and share it with your fellow sovereign friends and family. via WTVR.com RUTHERFORD COUNTY, Tenn. – A man posted to YouTube video he says shows him questioning sheriff’s deputies about a July 4 DUI checkpoint. The driver said he was pulled over, bullied around and searched without consent during the traffic stop. “All this harassment because my window was not lowered enough to his preference,” the driver posted on YouTube. Here is a great example of how to ignore the unlawful requests from law enforcement.Las Vegas DUI Checkpoint Refusal 6Share 57Share

Train of Thought: On the ‘Subway’ Photographs by Bruce Davidson In the spring of 1980, I began to photograph the New York subway system. Before beginning this project, I was devoting most of my time to commissioned assignments and to writing and producing a feature film based on Isaac Bashevis Singer’s novel, Enemies, A Love Story. When the final option expired on the film, I felt the need to return to my still photography—to my roots. I began to photograph the traffic islands that line Broadway. These oases of grass, trees, and earth surrounded by heavy city traffic have always interested me. I traveled to other parts of the city, from Coney Island to the Bronx Zoo. The subway interior was defaced with a secret handwriting that covered the walls, windows, and maps. To prepare myself for the subway, I started a crash diet, a military fitness exercise program, and early every morning I jogged in the park. As I went down the subway stairs, through the turnstile, and onto the darkened station platform, a sinking sense of fear gripped me.

“Why did you shoot me? I was reading a book”: The new warrior cop is out of control Sal Culosi is dead because he bet on a football game — but it wasn’t a bookie or a loan shark who killed him. His local government killed him, ostensibly to protect him from his gambling habit. Several months earlier at a local bar, Fairfax County, Virginia, detective David Baucum overheard the thirty-eight-year-old optometrist and some friends wagering on a college football game. “To Sal, betting a few bills on the Redskins was a stress reliever, done among friends,” a friend of Culosi’s told me shortly after his death. “None of us single, successful professionals ever thought that betting fifty bucks or so on the Virginia–Virginia Tech football game was a crime worthy of investigation.” On the night of January 24, 2006, Baucum called Culosi and arranged a time to drop by to collect his winnings. Sal Culosi’s last words were to Baucum, the cop he thought was a friend: “Dude, what are you doing?” Indeed, that’s exactly what happened to seventy-two-year-old Aaron Awtry in 2010.

Read the Introduction | Stare, Pry, Listen, Eavesdrop No better advice has ever been given to street photographers than that offered by Walker Evans, one of the greatest American photographers of the mid-twentieth century: ‘Stare. It is the way to educate your eye, and more. Evans would never have described himself as a ‘street photographer’. Street photography is an unbroken tradition, stretching back to the invention of photography itself. We are all photographers now Today’s street photographers are living in a digital society in which ideas, images and money move with increasing fluidity across national and cultural boundaries. Perhaps the most prolific street photographer today is the Google Street View system, in which a remote ocular camera fixed to a car records a continual stream of still images as it traverses the world’s cities. What’s in a picture? Amid the deluge of images now circulating in cyber-space, this book sets out to identify the strongest work by the most committed practitioners.

Abusive, Camera-Phobic Mall Cop Picks Fight With Wrong Woman Via Information Liberation : Depending on what side of fallacious authority you may have found yourself in the past, this video may either make you cheer or collapse in disgust. Maybe both? A group of people taking pictures on the very edge of mall property – pictures not of the mall, mind you – is confronted by a wildly out of control mall security guard. At this point, she actually tries to confiscate the cameras and then tells them to delete their footage. UPDATE: It appears that the individuals with cameras were taking photos of a truck that was overturned in the neighboring ravine.

Related:
Related:  Street Photography   -  Getting along with the Police