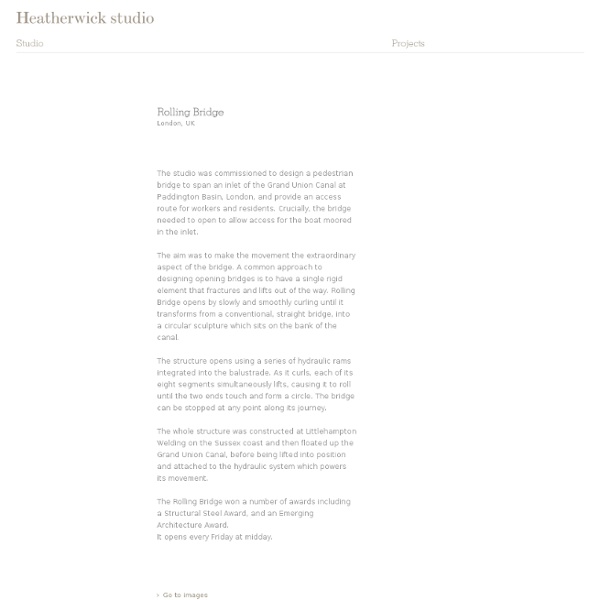 London, UK The studio was commissioned to design a pedestrian bridge to span an inlet of the Grand Union Canal at Paddington Basin, London, and provide an access route for workers and residents. Crucially, the bridge needed to open to allow access for the boat moored in the inlet. The aim was to make the movement the extraordinary aspect of the bridge. The structure opens using a series of hydraulic rams integrated into the balustrade. The whole structure was constructed at Littlehampton Welding on the Sussex coast and then floated up the Grand Union Canal, before being lifted into position and attached to the hydraulic system which powers its movement. The Rolling Bridge won a number of awards including a Structural Steel Award, and an Emerging Architecture Award. Go to images

Water Shade by Yitu Wang This project is completely apolitical. It IS literally a gate of water. This project goes by the name of “Water Shade” and keeps a shield of H2O around the fruit it is sworn to protect. It’s both a dish and a cover, working with water to keep freshness in and everything larger than Oxygen OUT! Moisture is locked in. Designer: Yitu Wang X – tape, Hinge Print Tape by Hyoungmin Park & Jeongmin Lee for mmiinn Sealing With A Hinge So far you have been sealing your cartons with either duct tape or normal transparent scotch tape. If you were to have the option of the X-tape, I’m sure you would have used it. Design is not always about problem solving or functionality. Well Done: a food company annual report that has to be cooked first Croatian creative agency Bruketa & Zinić have designed an annual report for food company Podravka that has to be baked in an oven before it can be read. Update: this project is included in Dezeen Book of Ideas, which is on sale now for £12. Called Well Done, the report features blank pages printed with thermo-reactive ink that, after being wrapped in foil and cooked for 25 minutes, reveal text and images. Here are details from Bruketa & Zinić: Well Done, the annual report for food company you have to bake before use Empty pages become filled with content after being baked at 100°C for 25 minutes. “Well done” created by Bruketa & Zinić is the new annual report for Podravka, the biggest food company in South-East Europe. a big book containing numbers and a report of an independent auditora small booklet that is inserted inside the big one that contains the very heart of Podravka as a brand: great Podravka’s recipes. To be able to cook like Podravka you need to be a precise cook.

Dry-Tech: The 20 Coolest Umbrellas You’ll Ever See Dry-Tech: The 20 Coolest Umbrellas You’ll Ever See The invention of the umbrella can be traced back thousands of years, but never to one absolute source. It's use has been depicted in historical texts, images and carvings dating back millennia-- to ancient Rome, Egypt, China and the Middle East. The Pileus Internet Umbrella Projects the Web Ever noticed that the common texture of your typical umbrella canopy is not unlike a projector screen? The "Umbuster" Brass Knuckles Umbrella Are YOU talking to ME? The LightDrops Rain-Powered Electric Umbrella The LightDrops umbrella does precisely what it's name implies-- it turns drops of rain into light. The Multi-Unit Superbrella Even the largest traditional umbrellas can't keep you dry in rains mixed with heavy winds. The Hydro-Chromatic Umbrella In your closet, this umbrella won't look any different from your standard unit. The Bluetooth Mobile Messenger Umbrella The Senz Smart Umbrella The Home-Made Electric Umbrella The Contracting "Polite Umbrella"

4thamendmentwear 4th Amendment Wear 4TH AMENDMENT UNDERCLOTHES Now there's a way to protest those intrusive TSA X-ray scanners without saying a word. 4th Amendment Metallic ink-printed undershirts and underwear. Assert your rights without saying a word. This Awesome Urn Will Turn You into a Tree After You Die | Design for Good You don't find many designers working in the funeral business thinking about more creative ways for you to leave this world (and maybe they should be). However, the product designer Gerard Moline has combined the romantic notion of life after death with an eco solution to the dirty business of the actual, you know, transition. His Bios Urn is a biodegradable urn made from coconut shell, compacted peat and cellulose and inside it contains the seed of a tree. Once your remains have been placed into the urn, it can be planted and then the seed germinates and begins to grow. You even have the choice to pick the type of plant you would like to become, depending on what kind of planting space you prefer. I, personally, would much rather leave behind a tree than a tombstone.

Lost & Found: Comfy Chair Cushioned with Built-In Storage Lighters, keys, coins … cushioned chairs and couches are notorious for nomming all kinds of things that slip out of our pockets or otherwise get left behind and slide into the cracks. This design simply celebrates that existing phenomena, like a giant-sized pin cushion. It may come as no surprised that this clever-but-boxy furniture piece was developed by architectural designers (of Daisuke Motogi Architecture), who have a knack for exposing and expanding uses for classic furnishing types. Pixel-like pads cover the entire surface of the seat both inside and out, forming slots in which one can accidentally drop a small item or intentionally stick a book, magazine, remote and more. Cleaning this piece would not be trivial, but for those who enjoy the occasional boredom-induced, couch-cushion treasure hunt, who knows what you might find that you or someone else left behind.

Men: Pee And Wash In The Same Fixture! Lenny Bruce would have had such fun with this, but this just makes so much sense, a sink built on top of a urinal! And designer Yeongwoo Kim has made it look good, too. The theoretical sequence is that you use the urinal, then wash your hands and the washwater rinses the urinal, saving water. It makes even more sense in multiple units in mens rooms, saving both space and water. The designer writes on his website: To save water, Eco Urinal is designed to use the water that was used for washing hands to flush the urine. This in some ways makes more sense than a waterless toilet and probably saves as much water. More on urinals:No Splash, No Flush Urinals from KohlerWaterless Urinals Introduced for Home UseUrinals Disguised as Trash Cans: Everyday Objects vs Anti-Social BehaviorPee in Style and Save WaterPopup Pissoir Solves Wee Problem

Imaginative Package Designs - Design Imaginative Package Designs Packaging is a very important marketing strategy to glamorize a product in order to attract the consumer's attention. Here I have compiled a selection of beautiful packaging designs, some conceptual and some that made it to the shelves but all great examples of the designer going the extra mile to ensure that all important first impression is a positive one. Enjoyed This?

Tea-time – Tea Steeper Design by Pengtao Yu Timely Steeping I am in love with the Tea-time tea steeper for its intuitive design and simplistic interaction between tea leaves, water and steeping time! A flipping action, akin to starting the timer, sets the tea making process into action. Loose tealeaves and hot water do their steeping business and the ready tea slowly trickles down to the bottom beaker. The timer/filter hold back the leaves and your cuppa is ready to sip! Designer: Pengtao Yu Tea-time is a 2011 Spark Awards entry. NOTCOT.ORG Creative and Unusual Cutlery Designs Modern cutlery and creative silverware designs that will spice up your dinner table and impress your guests. Bite Silverware Mark Reigelman has designed a set of “bitten” silverware to help raise awareness of worldwide epidemics such as starvation and obesity. Wrenchware Wrench-handled knife, crescent-wrench spoon and ratchet fork. Shape/Form Cutlery Beautiful cutlery set designer by Lukas Peet from Canada. Dexter Cutlery Each piece of cutlery is hand crafted and has it’s own character. Ribbon Cutlery Creative stainless steel cutlery designed by Makoto Yamaguchi. Flat Cutlery Five pieces from the Flat Model flatware series by Josef Hoffman. Exhausted Cutlery Cool cutlery follows the shape of objects it appears to collapse onto. Origin Cutlery Unusual cutlery inspired by the very first human feeding means: teeth, nails, and hand palms. Natural Cutlery Beautiful cutlery set merges traditional silver cutlery with the elegance of wood. Appetize Cutlery Fish Cutlery