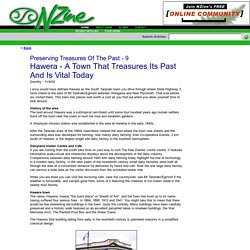 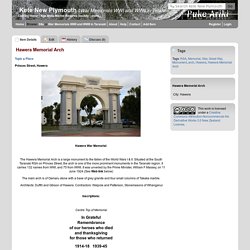 Situated at the South Taranaki RSA on Princes Street, the arch is one of the more prominent monuments in the Taranaki region. The main arch is of Oamaru stone with a base of grey granite and four small columns of Takaka marble. Architects: Duffill and Gibson of Hawera. Inscriptions: Centre Top of Memorial﻿ In GratefulRemembrance of our heroes who diedand thanksgiving for those who returned Marble panels on each side of the arch: Left Side: Those who made thesupreme sacrificeWorld War I1914-18: 104 names in 2 columns) Right Side: Those who made thesupreme sacrifice1914-1918: (28 names in 2 columns) (75 names in 2 columns ( 37 and 38)) Plaque 1, Column 1: Plaque 1 Column 2: [Total WWI 132] Plaque 2, Column 1 (Cont.): Plaque 2,Column 2 (Cont [Total WWII 75] On left hand granite base (difficult to read) This memorial was erected [& funded?] 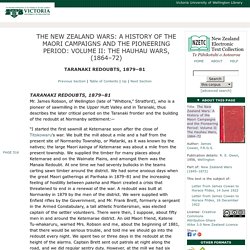 James Robson, of Wellington (late of “Whitiora,” Stratford), who is a pioneer of sawmilling in the Upper Hutt Valley and in Taranaki, thus describes the later critical period on the Taranaki frontier and the building of the redoubt at Normanby settlement:— “I started the first sawmill at Ketemarae soon after the close of Titokowaru's war. We built the mill about a mile and a half from the present site of Normanby Township, or Matariki, as it was known by the natives; the large Maori kainga of Ketemarae was about a mile from the page 516 present township. We supplied the timber for many places about Ketemarae and on the Waimate Plains, and amongst them was the Manaia Redoubt. At one time we had seventy bullocks in the teams carting sawn timber around the district. Hawera First World War memorial. 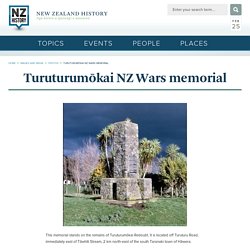 It is located off Turuturu Road, immediately east of Tāwhiti Stream, 2 km north-east of the south Taranaki town of Hāwera. The Turuturumōkai memorial records the dramatic events of 12 July 1868. On a frosty morning, a small garrison fought desperately to hold off a vastly superior Māori force. The raid was orchestrated by Ngāti Ruanui’s military leader, Riwha Tītokowaru. Tītokowaru’s strategy during his war of 1868–9 was one of controlled provocation. 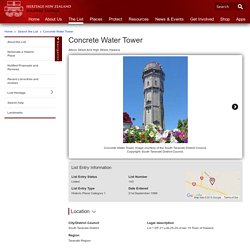 The small town of Hawera, which means 'burnt place' in te reo Maori, was built on a plain confiscated from Ngati Ruanui by the Crown in the 1860s. One option was the water tower, a favoured means of increasing water pressure in towns built on flat land. Cameron incorporated two separate tanks into the new water tower's design. The tower proved to be a major attraction for visitors to Hawera and became a symbol for the town's identity. As Hawera's population increased, the demand for water grew. Assessment criteriaopen/close A. IPENZ Engineering Heritage. Category Engineering Work (eg road, bridge, sawmill, dam) Description This reinforced concrete water tower was completed in early 1914 to provide adequate water pressure for fire fighting. 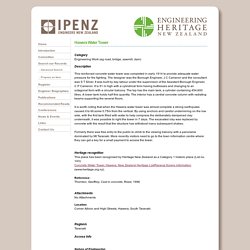