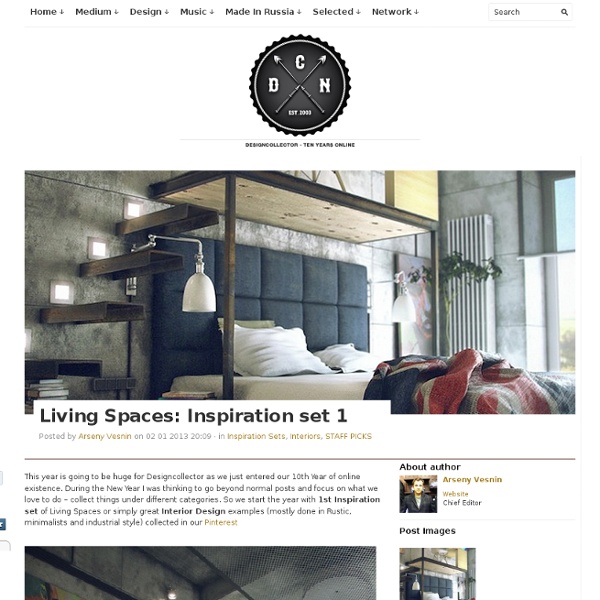 This year is going to be huge for Designcollector as we just entered our 10th Year of online existence. During the New Year I was thinking to go beyond normal posts and focus on what we love to do – collect things under different categories. So we start the year with 1st Inspiration set of Living Spaces or simply great Interior Design examples (mostly done in Rustic, minimalists and industrial style) collected in our Pinterest View all sets

Architecture National Trust The United Kingdom is one of the most historical places in the world with many historical sites and buildings of significance that were built throughout its vast history in the country. The National Trust for Place of Historic or Natural Beauty popularly known as just the National Trust is a conservation organization in the United Kingdom which owns and maintains many of the historical properties in Wales, England and Northern Ireland. This is an organization that was established in the late 19th century and its current president is H.R.H. (more…) Small Attic Loft Apartment In Prague The design of this modern loft conversion located in Prague, Czech Republic uses natural materials such as stone, brick and wood to enhance the flat and angular surfaces. Designed by architect Dalibor Hlavacek, the two-storey attic loft makes good use of limited floor space. The living room, kitchen, bedroom and bathroom are on the lower floor. The upper gallery, accessible via staircase and a steel footbridge, creates an intimate space for the study, which can also be used as a second bedroom. Via: ArchDaily

30 Fresh Space-Saving Bunk Beds Ideas For Your Home Stylish bunk beds are hard to find in a world filled with amazing furniture options. This is why we prepared a list of 30 Fresh Space-Saving Bunk Beds For Your Home to help you guide your search for the best ideas on how to display bunk beds in your children’s room. Space might be a problem for large families in urban dwellings, but the existing furniture market offers many opportunities to have a well-designed kids room with plenty of storage space and room for a restful, good night’s sleep. Kids would love to have a place to help them grow in a playful space, but sometimes, space issues can interfere with your plans. Each of the bunk beds shown in the photos below were designed to perfectly fit in smaller or bigger rooms, depending on the number of beds and the available space.

Bjarke Ingels Group cool spaces in donosti: COOL SPACES TOUR: Italian Rest in Notting Hill My love is sincere of this restaurant. Apart from the delicious food, I like rather than that the way they have added natural and artesanal touches in the decoration, as the food they cook. Just as in the kitchen and with truncs in mirrors. The use of the colour is another thing I like in this local. Enjoy the pictures! Este restaurante me gustó realmente. Enter your email address:

Useful Ideas and Layouts to Create a Photo Gallery Wall My most popular post to date that you, my awesome readers, just swoon over is how to create a photo wall display. This post alone has received well over 70,000 views and today I’m sharing even more great ideas and layouts to create your own photo gallery wall. Knowing where to begin when creating a montage of photos can often be intimidating, so I’ve gathered some handy examples on how to find the right balance and layout for various sized photos in all the different areas of the home. Here comes a long post with alot pictures, but it’ll be worth scrolling all the way through… Staircase, gallery wall, and ledge display ideas by Brenda Knight Photography Gallery wall ideas via Pottery Barn Photo and wall decor ideas via One Click Design Studio I really like the asymmetrical foyer photo layout. Room vignettes with photo gallery ideas via RobinWood Photography Wall Display Templates by Gradybug Designs Lots of display ideas – source unknown Gallery Wall idea by Jen of World of Dennifer

9 hours (9h) Designer Capsule Hotel Review - Kyoto, Japan I’ve been lucky enough to stay at some very nice hotels over the past couple of years but in Japan I was on a tight budget and determined to try something a little different. Originally created for businessmen who worked too late to catch the last train home, capsule hotels (カプセルホテル) have developed as an economical alternative to normal hotels in a country where space comes at a premium. Consisting of a large number of extremely small coffin-like “rooms” big enough for a single person to sleep in, Japan’s first capsule hotel made its appearance in Osaka in 1979. They have a bit of a grim reputation for their chicken-coop approach to habitation but in 2009 Tokyo-based Cubic Corp decided to take a fresh approach to this uniquely Japanese mode of accommodation. Upon arrival the first thing you do is place your shoes in a numbered locker and give the key to reception while checking-in; I doubt they get many people running off without paying the bill! Map Data Map data ©2014 Google, ZENRIN Map

Someone Invented Magic And It Is Freaking Us Out For more stories about ridiculous things, follow us on Facebook. - “I am so sick of my T-shirt getting wet whenever I pour a lot of liquid on it!” “I wish my iPhone 4 or 5 would not get so damaged every time I carefully place it at the bottom of a jug filled with water!” “My new white shoes have been stained by the chocolate sauce and mustard I squeezed on them earlier! What gives?!” “This cardboard box I chose to hold all of the water is just not doing a great job of it! These are all things you’re used to saying, but you will be saying them no longer! It is “a family of super hydrophobic coating that completely repels water and heavy oils,” and you can buy it online here for $20 a can. Couple questions left unanswered: A) What does it taste like? B) What does it feel like? C) How much cancer will it give me, and how quickly? D) What happens if you get it on your hands and then you want to wash it off your hands?