10 Reasons Why EarthShips Are F!#%ing Awesome 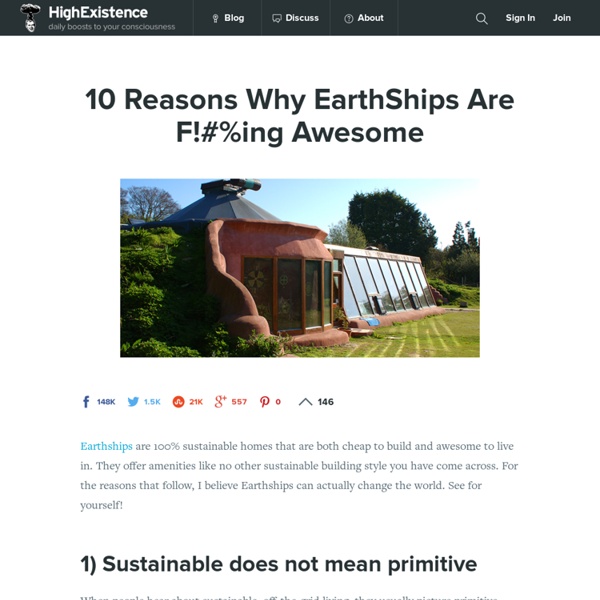 Earthships are 100% sustainable homes that are both cheap to build and awesome to live in. They offer amenities like no other sustainable building style you have come across. For the reasons that follow, I believe Earthships can actually change the world. See for yourself! 1) Sustainable does not mean primitive When people hear about sustainable, off-the-grid living, they usually picture primitive homes divorced from the comforts of the 21st century. 2) Free Food Each Earthship is outfitted with one or two greenhouses that grow crops year-round, no matter the climate. 3) Brilliant Water Recycling Even the most arid of climates can provide enough water for daily use through only a rain-harvesting system. 4) Warmth & Shelter The most brilliant piece of engineering in the Earthship is their ability to sustain comfortable temperatures year round. The large greenhouse windows at the front of the house always face south to allow the sun to heat up the thermal mass throughout the daytime. 5) Energy Related:  Sustainable buildings and cities • Abaut

Hamburg sets out to become a car-free city in 20 years Hamburg City Council has disclosed ambitious plans to divert most cars away from its main thoroughfares in twenty years. In order to do so, local authorities are to connect pedestrian and cycle lanes in what is expected to become a large green network. In all, the Grünes Netz (Green Web) plan envisages “eliminating the need for automoviles” within two decades. By connecting the entire urban centre with its outskirts Hamburg is expecting to smooth inner traffic flow. In all, the northernmost city is to lay out new green areas and connect them with the existing parks, community gardens and cementeries. Upon completion of the plan Hamburg will pride itself on having over 17,000 acres of green spaces, making up 40% of the city’s area. According to an official, the ambitious plan will “reduce the need to take the car for weekend outings outside the city”. The entire city centre is to be linked with its outskirts by an extensive network of pedestrian and cycle lanes

10 Reasons Why EarthShips Are F!#%ing Awesome Earthships are 100% sustainable homes that are both cheap to build and awesome to live in. They offer amenities like no other sustainable building style you have come across. For the reasons that follow, I believeEarthships can actually change the world. See for yourself! When people hear about sustainable, off-the-grid living, they usually picture primitive homes divorced from the comforts of the 21st century. Each Earthship is outfitted with one or two greenhouses that grow crops year-round, no matter the climate. Even the most arid of climates can provide enough water for daily use through only a rain-harvesting system. The most brilliant piece of engineering in the Earthship is their ability to sustain comfortable temperatures year round. This phenomenon results from the solar heat being absorbed and stored by ‘thermal mass’ — or tires filled with dirt, which make up the structure of the Earthship. With all of your basic needs provided for and NO bills each month, you’re free!

John Schneider | Jeremy Cowart I recently got asked to shoot photos for a show called “The Haves and HaveNots” for the Oprah Winfrey Network. I’ve shot many shows in my career and I always enjoy these shoots because there are so many challenges involved. There’s tons of “talent” aka celebrities involved, all their teams, all the hair, makeup and wardrobe involved, there’s very limited time, there are tons of shots to create, there’s an immense pressure to “nail” the creative concept and obviously there is usually lots of money involved. These are high budget, high-pressure shoots. It’s diving into the deep end for sure, as far as photography is concerned. And I love that challenge. But one of the things I DON’T love about these shoots is that I never really get to connect with the people I’m shooting. This is one of those VERY few rare occasions where I was able to connect. One of the cast members was John Schneider. Towards the end of his session, we brought in the lead cast member, Tika Sumpter, to interact with.

Soon to Grace the New York Skyline: Towers Made of Fungus - Megan Garber The mycelium is the vegetative network that forms the underground section of a fungus. It grows quickly, and stretches around any place that offers it space to grow. It is stringy. It is, as a network, sturdy. It looks, in general, like this: Wikimedia Commons This summer, fungal mycelium will be brought—purposely—to an unusual environment: New York City. You could call this "mycotecture," as some have done ... but you could also just call it ultra-organic construction. The bricks look like this: Evocative Once formed, the bricks will head to Long Island City, where they'll be used to construct P.S. 1's pseudo-smokestacks. The idea of the dual-brick construction is to draw hot air up through the tower, away from party-goers on the ground. And after the summer fades? Via Gizmodo This post originally appeared on The Atlantic.

Earthships: Self-Sustaining Homes - A Post Apocalyptic Design When an earthquake hits, and the power grid goes down, the water pipes are broken, gas lines are leaking everywhere, where would you want to be living? Where heat and power come from the sun? Where cooling comes from the earth? Where garbage has been used for beauty and light... Solid and long lasting, super insulated Be sure to watch the video on page 3 ruteqube comments on I'd like to have a discussion about female streamers. What do you feel defines an attention seeking streamer and how common do you think that actually is? Brazil: 36 Cities to Protest World Cup on Saturday In a billion dollar Potemkian operation that will fatten the pockets of private contractors with public money of working people, the Brazilian government, host to FIFA’s World Cup, continues to expel its defenseless poor - employing incredible police violence at gunpoint, from the sight of the incoming tourists and football fans. Support the people in Brazil who are resisting the world cup with your voice: Take part in the tweetstorm on 1/23/14 at 3pm cst, 7 pm brst to raise awareness about the protests coming on 1/25/14: Curta Operation World Cup e participe do EVENTO TWITTAÇO GLOBAL dia 23 para divulgar o ATO NACIONAL do dia 25/JAN. 20,000 people are expected to protest just in Sao Paulo, overall protests will take place in 36 cities in Brazil this Saturday. There is a good reason for them: 170,000 people are to be evicted from their homes and communities so that the mega constructions for the World Cup can be erected. “Cup for the rich. #stoptheball Sincerely,”

MIT Students Create A Brick That Could End Pollution From Dirty Brick Kilns India's brick industry, spread out over 100,000 kilns and producing up to 2 billion bricks a year, is a big source of pollution. To fire to hot temperatures, the kilns use huge amounts of coal and diesel, and the residue is horrendous: thick particulate matter, poor working conditions, and lots of climate-changing emissions. MIT students have created an alternative. "Clay bricks are fired to 1,000 degrees Celsius," says Michael Laracy, a graduate student who's worked on the project. The Eco BLAC brick is 70% boiler ash from paper mills mixed with sodium hydroxide, lime, and a small amount of clay. Laracy, a structural engineer, says the brick is currently being tested in partnership with a paper mill in Muzaffarnagar, a city north east New Delhi. If the Eco BLAC bricks prove successful, that would be good for India's air quality as well as its food security.

abeyante comments on Seriously considering ending an engagement over bad sex. Am I being an idiot? Home Quantum Energy Generator Please note: The video you have just seen is a short compilation of existing inventions to demonstrate that people have already built these types of machines and they do indeed work! Our prototype is not yet built and that is the reason for this campaign. Once we have a working model we have an investor who will fund the mass manufacturing of the Quantum Energy Generator. About the Inventor I am a career Electronics Engineer, who has been designing electronic controls for electric motors for 26+ years. I have recently resigned from the position I've held for 26 years with an internationally known motor manufacturer because I am confident in my ability to bring this technology to people and communities that need it. About the Invention The words 'quantum field' sound mysterious, but this is just another way to say 'smaller than atoms.' - We have an investor who will fund large-scale manufacturing of the QEG - once we have a working prototype - guaranteed! - Convenient and clean!

List of tool-lending libraries Tools available for borrowing at Fletcher Free Library, Burlington, Vermont The following tool libraries allow patrons to borrow tools, equipment and "how-to" instructional materials, functioning either as a rental shop, with a charge for borrowing the tools, or more commonly free of charge as a form of community sharing. The Tool library performs the following main tasks: Tool Lending: all kinds for use in volunteer projects, facility maintenance and improvement projects, community improvement events, and special events.Tool Advocacy: for the complete and timely return of all borrowed tools, to guarantee the long-term sustainability of available inventory. Makerspace[edit] Makerspace are places where people perform the following main tasks: to learn about technology, crafts and other kinds of making;to share knowledge and skills with others; andto apply this knowledge and skill by creating things. History[edit] A tool lending library was started in Columbus, OH in 1976. Australia[edit]