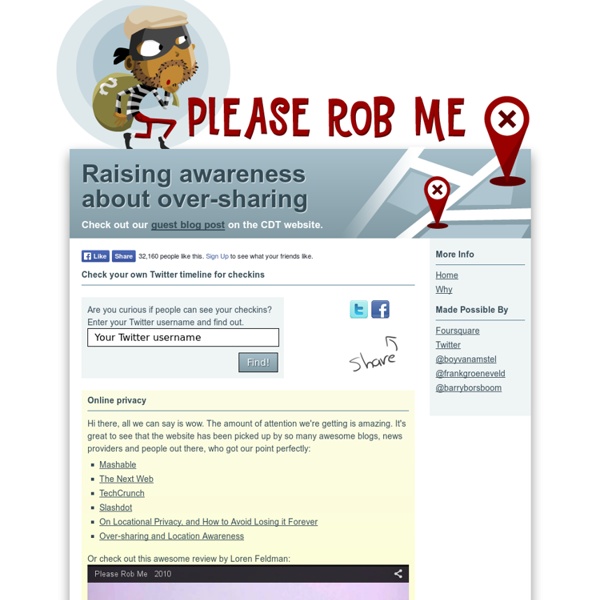 Google's Safe Browsing Diagnostic Tool A week ago Google announced the release of a safe browsing diagnostic tool. To use the tool, just append a URL to the end of For example, to test this site, you would enter Google will then return four sets of security information about that page. (1) The current listing status of a site and also information on how often a site or parts of it were listed in the past. (2) The last time Google analyzed the page, when it was last malicious, what kind of malware Google encountered and so fourth. (3) Did the site facilitated the distribution of malicious software in the past?

I Can Stalk U: New Site Posts Exacts Locations of Twitter Users Posting Geotagged Photos Remember PleaseRobMe.com? The website, which warned of the dangers in sharing your physical location online, now has a successor called I Can Stalk U. While PleaseRobMe (now shuttered) focused on how publicly broadcasting your location could alert criminals to an empty house nearby, ideal for burglarizing, the new site aims to raise awareness about the dangers of geo-tagged photos, specifically the ones shared from your smartphone to social networks like Twitter. "Many people may be unaware that lots of smartphones geo-tag photos," explains security researcher Graham Cluley, who revealed the site via blog post today. The site itself quietly launched a few months ago to little fanfare.

Topsy - Real-time search for the social web With iOS 9, Search lets you look for content from the web, your contacts, apps, nearby places, and more. Powered by Siri, Search offers suggestions and updates results as you type. There are two ways to use Search on your iOS device. Quick Search Drag down from the middle of the Home screen and type what you're looking for. Detect How can you detect if your computer has been violated and infected with DNS Changer? An industry wide team has developed easy “are you infected” web sites. They are a quick way to determine if you are infected with DNS Changer. Each site is designed for any normal computer user to browse to a link, follow the instructions, and see if they might be infected. Each site has instructions in their local languages on the next steps to clean up possible infections.

How do I disable this? How are you doing this? That's easy. Metadata Facebook Places & Privacy: Both Real & Overblown Concerns Facebook launched its mobile location feature last week, called Places, and just as the company deserves - there was intense scrutiny of the new feature's privacy settings. It turns out that you can check-in friends as being at the same location you are in. That's a new and perhaps counter-intuitive bit of social engineering. People have been calling it a bug, a privacy violation, a crime against human decency.

How to Tell If A Website Is Dangerous These days it can be very difficult to tell if a site is trustworthy or not. Many nefarious sites are being designed to look respectable. Thus you should always make sure that a site is not dangerous by using multiple approaches. This is especially important to consider before providing a site with sensitive information such as credit card numbers, banking information, your email address, etc... In general you may want to be wary of a site if it asks you for unnecessary personal information, a credit card number, or a bank number when it's not necessary. This could be evidence of them phishing for your sensitive information. Your Facebook Friends Are Watching You—Did We Just Move Closer to 1984? George Orwell’s novel 1984 begins with Winston Smith, the main character, seeing posters saying BIG BROTHER IS WATCHING YOU. In 2010, that could be replaced with FACEBOOK IS WATCHING YOU. Or rather, YOUR FRIENDS ON FACEBOOK ARE WATCHING YOU.

Blog of Rights: Official Blog of the American Civil Liberties Union » Judge: No Difference Between Cell Phone Tracking and GPS Vehicle Tracking A few weeks ago, we wrote about United States v. Maynard, a decision from the U.S. Court of Appeals for the District of Columbia Circuit requiring the government to obtain a warrant when it uses a GPS tracking device to monitor someone's movements. Last Friday, Judge James Orenstein in the Eastern District of New York recognized that Maynard's reasoning also applies when the government tries to retrace a person's whereabouts using historical cell phone location information stored by cell phone carriers. Judge Orenstein rejected each possible factual difference between GPS vehicle tracking and historical cell phone tracking, and concluded that cell phone tracking is just as intrusive to Americans' reasonable expectations of privacy in the details of their everyday lives as GPS tracking. We believe that Judge Orenstein got it exactly right.

Nike+ Meets Gowalla in Vail Resorts App for Skiers and Snowboarders More than just powder will be coating the mountains and chair lifts at Vail Resorts this fall. The Colorado-based company has unveiled a new social gaming app for its 2010-2011 ski and snowboard season that allows visitors to track their activities and share them with their friends and family — all via radio frequency (RF)-enabled chips embedded in their season passes and lift tickets. The app, called EpicMix, is a cross between Nike+ and miCoach, which allow you to track your physical activities, and Gowalla, which rewards users for exploring new areas via its Trips feature. Like Gowalla, EpicMix rewards users with special pins for various accomplishments, such as being on the first chairlift of the day, or skiing a certain number of vertical feet over a designated period of time. How It Works