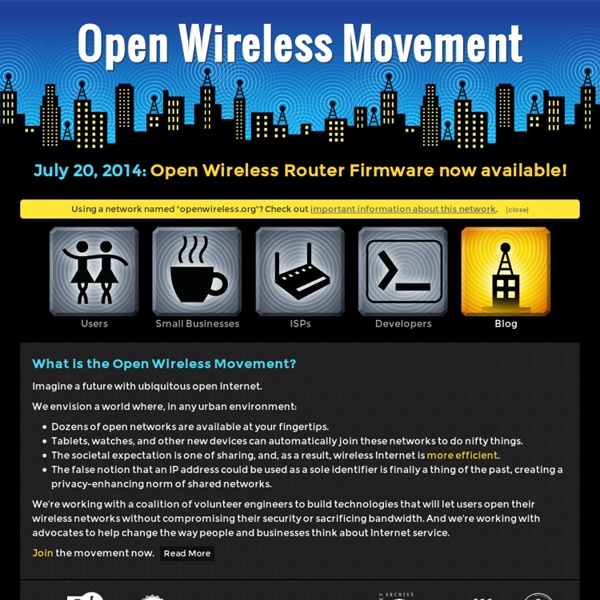 How to Deploy HTTPS Correctly By Chris Palmer and Yan Zhu Originally published on 15 Nov 2010. Revised on 12 Dec 2013. Internet technologists have always known that HTTP is insecure, causing many risks to users. Because HTTP traffic is unencrypted, any data sent over HTTP can be read and modified by anyone who has access to the network.

How to delete Facebook from your life completely Deleting Facebook: more difficult than you might think. Photo: Mashable This post was originally published on Mashable. If you're seriously considering deleting your Facebook account, you're not alone. Start typing in the letters "dele" into Google and you'll see "delete Facebook account" as a top suggestion. The Truth Is Coming And It Cannot Be Stopped Shortly after Edward Snowden went public with his findings on the NSA’s surveillance program, he uttered some very powerful words: “All I can say right now is the US Government is not going to be able to cover this up by jailing or murdering me. Truth is coming, and it cannot be stopped.” Truth is coming, and it cannot be stopped. Exciting words for most of the general population, but troubling for a select few in Washington, New York, London and Brussels.

Online Visual Traceroute Map Data Map data ©2017 Google, INEGI Map Satellite Visual traceroute may have misplaced routers. Can You Trust Cheap Chinese Phones with Your Privacy? Should you trust a low-priced Android phone from a brand you've never heard of with your security and privacy? It might not be such a wise idea. Illustration: Tom's Guide The fact is that many low-priced Android smartphones have had security and privacy problems. In late July, Russian antivirus firm Dr.Web reported that models sold under the Leagoo and Nomu names had a malicious program built right into the firmware.

Why I told my friends to stop using WhatsApp and Telegram This morning I told my friends to stop using WhatsApp and sent them an invitation to switch to the Signal messaging app. Here’s why. Encryption Protocols: The Signal Protocol VS Telegram’s MTProto You may not realize it, but you’re probably already using the Signal Protocol — along with more than 1 billion people every day. The Signal Protocol is used by WhatsApp, Facebook Messenger, Google Allo and Signal’s own messaging app. But what is the Signal Protocol? Is it possible to circumvent metadata retention and retain your privacy? There has been quite a lot discussion lately on how to avoid metadata retention, particularly in the context of leaking sensitive information to journalists. Notable examples have come from journalist Laura Tingle and, rather surprisingly, Malcolm Turnbull, who gave the impression that avoiding metadata collection was trivially easy. Is metadata retention really that easy to avoid?

Think your metadata is only visible to national security agencies? Think again It was bound to happen, and it did. Poorly crafted legislation – designed to allow national security agencies to collect information with the aim of protecting Australians from terrorists – is now reportedly being exploited by a range of different government agencies for other purposes. It has been widely reported that the Veterinary Surgeons Board of WA, Victorian Fisheries, Liverpool City Council, and the Australian Sports Anti-Doping Authority are among the entities that have requested access to metadata. Read more: Benign and powerful: the contradictory language of metadata retention

Australian metadata laws put confidential interviews at risk, with no protections for research Each year, academics and students make countless applications for research ethics approval, based on the promise of confidentiality to their interview subjects. Interviewees sometimes offer academic researchers information that might be self-incriminating or might jeopardise the rights and liberties of others they’re discussing. But Australia’s metadata retention laws can lead to the identification and even incrimination of the very people whose identities academic researchers have promised to keep secret for their work. Read more: Think your metadata is only visible to national security agencies?