Find your own private Internet with Freenet 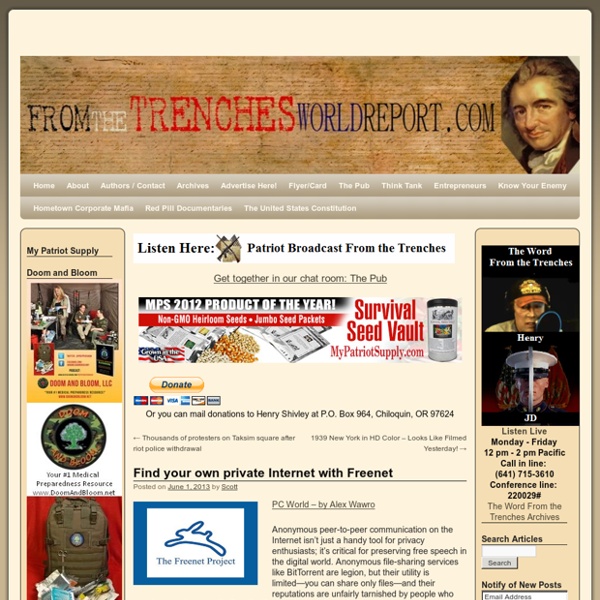 PC World – by Alex Wawro Anonymous peer-to-peer communication on the Internet isn’t just a handy tool for privacy enthusiasts; it’s critical for preserving free speech in the digital world. Anonymous file-sharing services like BitTorrent are legion, but their utility is limited—you can share only files—and their reputations are unfairly tarnished by people who use them to share media illegally. If you’re looking for a highly anonymous peer-to-peer network with websites, forums, and more, look no farther than the Free Network, one of the best-kept secrets in anonymous communication. Here’s how it works: Freenet is an anonymous peer-to-peer data-sharing network similar to BitTorrent, but with one key difference: All uploaded data is assigned a unique key, sliced up into small, encrypted chunks and scattered across different computers on the network. Next, head over to the Freenet Project website, and download the Freenet client for your operating system.

Firefighting Robot Paints 3D Thermal Imaging Picture for Rescuers Engineers in the Coordinated Robotics Lab at the University of California, San Diego, have developed new image processing techniques for rapid exploration and characterization of structural fires by small Segway-like robotic vehicles. A sophisticated on-board software system takes the thermal data recorded by the robot’s small infrared camera and maps it onto a 3D scene constructed from the images taken by a pair of stereo RGB cameras. This allows small mobile robotic vehicles to create a virtual reality picture that includes a 3D map and temperature data that can be used immediately by first responders as the robot drives through a building on fire. The research is part of a plan to develop novel robotic scouts that can help firefighters to assist in residential and commercial blazes. The robots will map and photograph the interior of burning buildings by using stereo vision. Computer scientists in Prof.

Masdar Buys Inkjet Printer for 3D Printing Solar Cells! The Masdar Institute of Science and Technology (MIST) in Abu Dhabi, which is affiliated with the Massachusetts Institute of Technology (MIT), has purchased a Fujifilm Dimatix DMP283 inkjet printer – the learning institute’s first step towards printing its very own solar cells! For the longest time, the United Arab Emirates had no chance to keep pace with the western world’s clean tech advancements mostly because of a dearth of skills and a non-existent supply chain of necessary materials. But that is changing now as government and civil society leaders recognize the importance of keeping pace with western developments – particularly to secure the region’s energy hegemony for the future. As such, Beirut recently opened the first 3-D printing shop and now MIST, a branch of Masdar, has announced that it has purchased a Fujifilm Dimatix DMP283 inkjet printer in order to prepare its graduate students to learn how to print their own organic optoelectronics. “Dr. MIST President Dr. :: Arab Brains

Hydrogen - Nature's Fuel Power JMD From PESWiki "E pure si muove / And yet it moves."-- Galileo said of the Earth Compiled by Sterling D. Allan Pure Energy Systems News June 18, 2013 A French company, Power JMD, appears to have an exotic free energy device that is getting close to market (some time in "2013 or 2014"). From what I can gather, it uses some kind of rotational mechanism that is able to self-loop and provide excess energy; and it is fairly bulky and fairly well engineered. On their site, they say: "With the POWERJMD system, you will get an independent and almost free ecologic source of electricity. And on their "goals" page, they say: "This new system has the potential to end the mass production of electric energy as we know it today." "Who has not dreamed of producing his own electricity? "The POWERJMD system does not pollute and emits very little noise. "Here is a generator for every use: Homes, apartment buildings, industry, commercial centers, and municipalities." Official Websites Videos Clean, Free Energy

THE 18 MOST SUPPRESSED INVENTIONS Perhaps the most notorious suppressed invention is the General Motors EV1, subject of the 2006 documentary, Who Killed the Electric Car? The EV1 was the world’s first mass-produced electric car, with 800 of them up for lease from GM in the late ’90s. GM ended the EV1 line in 1999, stating that consumers weren’t happy with the limited driving range of the car’s batteries, making it unprofitable to continue production. Many skeptics, however, believe GM killed the EV1 under pressure from oil companies, who stand to lose the most if high-efficiency vehicles conquer the market. In 1921, if the streetcar industry wasn’t actually naming streetcars Desire, it was certainly desiring more streetcars. The holy grail of automotive technology is the 99-mpg car. Nikola Tesla was more than just the inspiration for a hair metal band, he was also an undisputed genius. Despite how silly it sounds, water-fueled vehicles do exist. Dr. Comments comments

Beginners Electricity Lab Starting Guide Starting your very own Tesla Lab is made much easier when you know what gear you shall need. We’re all in this process of learning together so let’s share our research and experience in everything, no matter how small. It all helps. Each of these items I have ordered myself and can vouch for their quality. If you have other suggestions and leads please share. Each item shall have a score of 1-5 : Five being “absolutely essential” to 3 being “very useful past the novice stage” and 1 being “acquire only at advanced stage when needed” Multi-Meter -5 Every electricians very first tool. Tools Electronic ComponentsThese are basic elements and you can find them at a Radioshack. ConnectorsHeat Shrink TubingAlligator Clips and Test LeadsBreadboardsResistorsCapacitorsLEDs and DiodesOn Off Switches and Potentiometersetc… This is just a good starting point, the real joy will come from growing your own lab your own way.

Top 10 Real Foods To Stockpile For When Electricity Goes Out 2reddit 0stumbleupon When it comes to food storage, one of the most common questions asked by preppers is “What are the best “REAL living” foods I can stockpile in my long term storage pantry?” The reason they ask this is because many long term food storage pantries consist of large amounts of heavily processed food items because they are cheaper, readily available, and have amazing shelf lives. So then what kind of real foods can you store at room temperature that you can eat without electricity? Click the link below to read a great article detailing… Get Updates

My Quest To Create Self-Building, Self-Tooling, People-Free Manufacturing Plants ⚙ Co How a Rocket Scientist Ended Up Designing Automated Factories On Earth Every morning I sit down at my computer and work on an idea that could change the world: Automated factories that can grow, like an acorn can grow into an oak tree. Like any factory, these factories would produce useful products, but they would also make parts and materials for their own expansion. From a starter kit, which I call a “Seed Factory,” the factory takes design files and turns them into more equipment. As the factory grows and has more equipment, it can automate more of the steps from raw materials to finished product, and make a higher percentage of its own parts. So how did a rocket scientist end up working on this? Space was, and still is, too expensive for ordinary people to do on their own. An Idea Hatches: Self-Replicating Factories You see, the cost of doing anything in space is still dominated by shipping costs. How 3-D Printing Could Start A Manufacturing Revolution FAQ About Seed Factories

Science in Action Winner for 2013: Elif Bilgin | @ScientificAmerican Elif Bilgin, winner of the 2013 Science in Action award, a $50,000 prize sponsored by Scientific American as part of the Google Science Fair. Credit: Elif Bilgin “Genius,” Thomas Edison famously said, “is 1 percent inspiration and 99 percent perspiration.” He would have found a kindred spirit in Elif Bilgin, 16, of Istanbul, Turkey, winner of the 2013 $50,000 Science in Action award, part of the third annual Google Science Fair. The award honors a project that can make a practical difference by addressing an environmental, health or resources challenge; it should be innovative, easy to put into action and reproducible in other communities. Bilgin spent two years toiling away on her project to develop a bioplastic from discarded banana peels, enduring 10 failed trials of plastics that weren’t strong enough or that decayed rapidly. The ingredients to make Bilgin’s plastic are relatively benign. My colleague, Rachel Scheer, interviewed Bilgin. I would choose James D.

Graphene Aerogel – Lightest Material in The World A research team headed by Professor Gao Chao have developed ultra-light aerogel – it breaks the record of the world’s lightest material with surprising flexibility and oil-absorption. This progress is published in the “Research Highlights” column in Nature. Aerogel is the lightest substance recorded by Guinness Book of World Records. It gets its name due to its internal pores filled with air. It couldn’t even cause deformation on dandelion flower fluffs. Gao Chao’s team has long been developing macroscopic graphene materials, such as one-dimensional graphene fibers and two-dimensional graphene films. In reported papers the carbon sponge developed by Gao’s team is the record holder of lightest material, with 0.16 mg/cubic centimeter, lower than the density of helium. The basic principle of developing aerogel is to remove solvent in the gel and retain the integrity. The title of review in Nature is “Solid carbon, springy and light”. The new material is just like a new-born baby. Related: