Cocktails — Information is Beautiful. Adult Capri Suns-Bag o' (vodka) lemonade - perfect for the beach! best idea ever. Pure stinkin genius. Freeze it first and take to beach and squeeze to make it slushy-this way it won't get watered down:) - cute-tattoo. No, Starbucks’ Chai Tea Latte is not real chai. Chai in the West has become synonymous with the overly sweet, oddly spicy blend that Starbucks sells as a Chai Tea Latte. 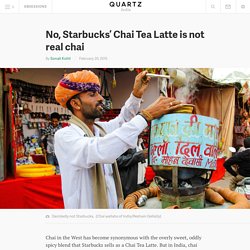 But in India, chai takes on different flavor profiles, snack accompaniments, and even drinking vessels depending on the region or city or town. First, a brief history of chai: “chai” translates to “tea” in Hindi and several other Indian languages (so Starbucks is being redundant—Chai Tea just means “tea tea”). Tea came to India from China, but was popularised largely in the British colonial era when large plantations were established. And as a form of marketing, the tea was often gifted to British factory owners in the subcontinent. The owners fed that tea to Indian workers as a source of energy and cheap calories, with cream from northern Europe and sugar harvested from slave plantations in other British colonies. 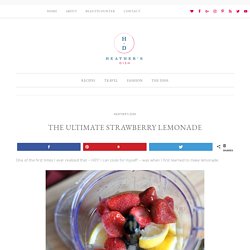 I can cook for myself! – was when I first learned to make lemonade. I magically found the refrigerated lemon juice at our house and followed the directions to make my own lemonade. I stirred and stirred and stirred again until that sugar was finally dissolved. Speaking of which, what gives sugar?! Aviation (cocktail) The Aviation was created by Hugo Ensslin, head bartender at the Hotel Wallick in New York, in the early twentieth century.[1] The first published recipe for the drink appeared in Ensslin's 1916 Recipes for Mixed Drinks. 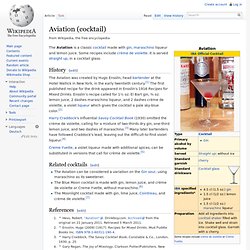 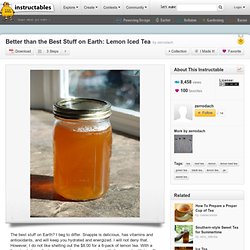 But for the ones out there that didn't catch on, this is the most vital step. Again. It is still important. Pour 1 quart of water into the saucepan.Put the lid on the saucepan and put it on the stove to boil.Boil it.Once the water has been boiled, pour it into the jar. Set the kitchen timer for 20 minutes.Put both the green and black tea bags in the water.Start the timer and let the tea steep for 20 minutes. When the timer goes off, pull the tea bags out of the tea.Apply 15-17 squirts of lemon juice (more for more lemony flavor, less for less lemony flavor).

*You don't have to use sugar, but it makes the final product of lesser quality. Cocktail Recipe: Grown-Up Sweet Tea. I think I’ve mentioned it before, but for those of you new to North On Harper or prone to skimming my posts (I am under no illusions!) , my husband is the GM of a bar/club. We actually met back when we were both working in another restaurant/bar (he was a bartender, I was a waitress).

As a result, whenever we go to parties, people ask Lukus to make a cocktail. And since we were talking about cocktail dresses yesterday, I thought it only fitting that I ask him to share one of his recipes with us! I am excited for Lukus to share this recipe, as he actually won a competition based off of it. Ingredients (per cocktail): Green Tea Smoothie Recipes {Guest Post} 19.5K Flares Twitter 11 Facebook 90 Pin It Share 10.3K Google+ 2 StumbleUpon 9.1K Email -- Email to a friend Filament.io Made with Flare More Info 19.5K Flares × Smoothies are a regular breakfast item in our house, usually consisting of a variety of fruits, coconut yogurt, and some almond or coconut milk. 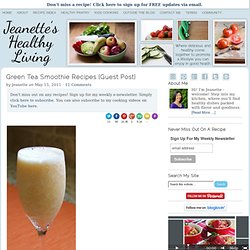 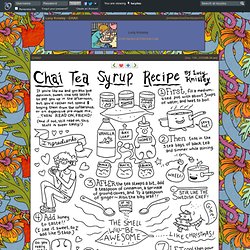 I'm totally going to use this, thanks. if you go to middle eastern stores, or even indian stores cardamon is waaay waaaaay cheaper. stop buying ethnic ingredients at chain grocery stores- they over charge!! Same goes with pomegranate juice... or figs... or dates. - StumbleUpon. S 25 Most Popular Recipes of 2010. Brazilian Lemonade. This is my most favorite drink. 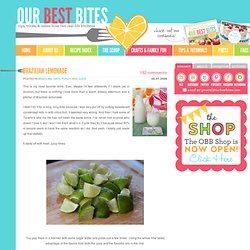 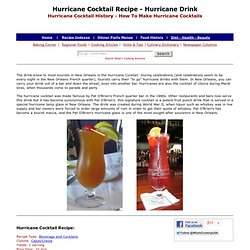