The Brew Site: Beer Blog for Craft Beer, Brewing, and Homebrewing, in Bend, Oregon. The Brew Lounge. The Cork Board: The premiere blog of the Napa Valley. 11 stunning photos from the 2013 Napa Valley wine grape harvest It’s only early September, but this year’s annual wine grape harvest is already in full swing. 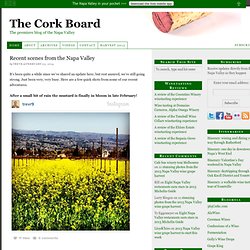 There’s a frenetic vibe across the Napa Valley as winemakers, vineyard managers and crews keep close tabs on Brix levels, current temperatures and weather forecasts, among many other things. Below are eleven stunningly gorgeous photos snapped by those on [...] Write for Wine: It's Wine O'Clock Somewhere! The historic victory was surprising to many, particularly in Europe where the expectation was for a French winner; a fictional version of the amazing event was featured in the 2008 film, Bottle Shock. 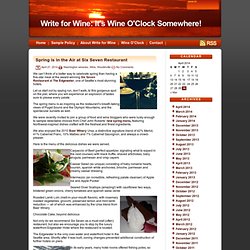 (Notably, the Paris competition is just one highlight of Chateau Montelena’s rich history.) Winemaker Mike Grgich – who later joined with Austin Hills to establish Grgich Hills – crafted the 1973 Chardonnay, which remains on display at Chateau Montelena’s only satellite tasting room in California, just off the lobby at the Westin St.

Francis in San Francisco. Hoosier Beer Geek: A Beer Blog for Indiana, from Indianapolis. The Journey of Jordan Winery: an award-winning blog featuring wine and food videos. Ramblings of a Beer Runner. Bibulo.us - We plead the 21st. This is a preliminary version of the Bibulo.us Cocktail Taxonomy and a request for comments on it from the bar community. 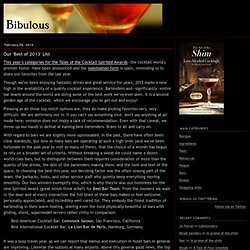 During the writing of the first Bibulo.us cocktail book it has become apparent that existing methods of categorizing cocktail recipes do not handle wine-, beer-, champagne-, and other low-alcohol-based drinks in a consistent fashion with other drinks. The goals of this taxonomy are thus to create a consistent, regular, and objective method for organizing cocktail recipes by type. Consistent such that the approach does not vary by type of drink. Regular such that it can be quickly applied and the method easily remembered.Objective such that it does not require subjective judgments such as whether a drink is best described as "dry" or "sweet".

Vinsanity. Northwest Beer Guide (aka, The Pickled Liver) Wine Blog Wine Blog » Juicy Tales by Jo Diaz. Why The PLCB Should Be Abolished. Gabe's View. The Not So Professional Beer Blog. Cocktail virgin slut. Wine and Food Pairings, Recipes, Reviews/News and Culinary Confessions. Samantha Sans Dosage. Imbibe Unfiltered. Schiller-wine. Beer Therapy. The Brewers Association Board of Directors has approved changes to its statements of purpose, mission, core values and beliefs, as well as its definition of craft brewer. 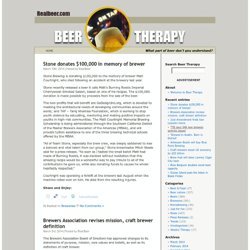 “The changes to fundamental elements of our industry were undertaken with significant deliberation and consideration of many voices,” Paul Gatza, Brewers Association director, said for a press release explaining the changes. “In November 2013, at the board’s direction, the BA surveyed our voting brewery members regarding the ‘foundational documents’ of our association. The results gave us ample member input on these matters of critical importance as the Board headed into its strategic planning meeting.” The press release outlined what has changed. Purpose Slightly revised, the Brewers Association now states its purpose as: To promote and protect American craft brewers, their beers and the community of brewing enthusiasts. Mission The Brewers Association mission now states: Core Values & Beliefs Craft Brewer Definition Small. 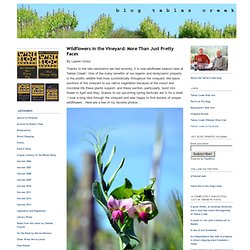 I cannot think of any French wine family with better credentials. We love them. Rockss and Fruit. It's Pub Night: A Portland Beer Blog. The Session Beer Project™ Wine Compass Blog. Hungry Crowd. Tasting Room Why You Should Drink Portuguese Wine BY Ray Isle | POSTED APRIL 30, 2014 AT 12:00PM EDT For F&W's executive wine editor Ray Isle, Portugal is the most exciting wine country in the world that the U.S. doesn’t know enough about. read more Drink This Now 5 Hoppy Beers to Try Now BY Ray Isle | POSTED APRIL 16, 2014 AT 3:00PM EDT It's important to remember that beer, when you come right down to it, only requires four ingredients: Water, a starch, yeast and hops. 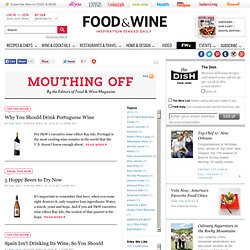 Read more Spain Isn't Drinking Its Wine, So You Should BY Ray Isle | POSTED APRIL 9, 2014 AT 7:00PM EDT. Alcademics.com. On the Wine Trail in Italy. Beerblog.genx40.com. Www.1winedude.com. Hoperatives - Believers in Better Beer (In Cincinnati and Beyond) The Boundary Bay Brewery blog. Yours for Good Fermentables ™ Bigger Than Your Head. The Feiring Line. Impressed by the handling of the Olivier Cousin case, I stopped in to talk lawyer Eric Morain when last in Paris. 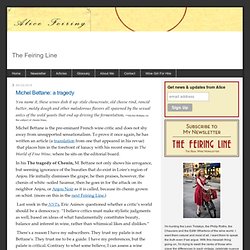 With a case of Frank Cornelissen 2009s resting against the wall, the avocat sat behind his desk in his art-filled office. His handsome-cherubic face is angled in by a gently silvering beard. Mail constantly beeped into his computer. The Wine Economist. The monthly online cocktail party. A blog about the world of wine. HoseMaster of Wine™ RJonWine.com - fine wine events, tasting notes and wine geekery. Negotiating the Epistemologic Implications of Oenophilia. Beeronomics. Brookston Beer Bulletin - Jay R. Brooks on Beer.

The Gray Report. The Potable Curmudgeon. The World of Gord. Vinography: A Wine Blog. Brouwer's Cafe. Brewpublic: Craft Beer News and Information Blog from Portland, Oregon. Washington Beer Blog. Appellation Beer: Celebrating Beer From a Place. A quick exchange of comments here Monday provoked this thought from Boak & Bailey about what happens to even the most dominant of breweries over time: Our suspicion is that, of the current wave of new brewers (1970s to now) some will inevitably become the new Whitbreads and Watneys.We don’t see, say, Sierra Nevada going into the Lite Lager business any time soon, but we can imagine, in thirty years time, a business which seems complacent and arrogant, and of which people will say: “They’re so dominant that no-one else can get into the market, and all they produce is that bland, dumbed-down, sub-6% pale ale crap …”If that does happen, there will be plenty of brewers waiting to challenge them, and the cycle will continue. 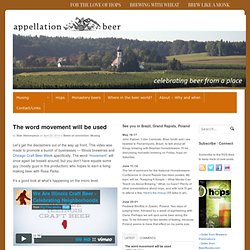 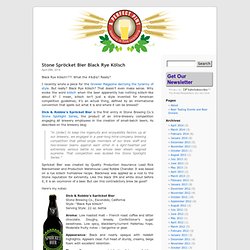 I move from beer to beer in search of the next thing, frequently having to remind myself to go back every once in a while to beers that I love. Brand loyalty plays only a small part in my beer enjoyment. That said there is one beer that I always have in my refrigerator. That beer is Schell’s Pils. It will come as no surprise to anyone who has ever heard me speak or read anything that I have written that I love pilsner. So when Schell’s announced that it would be celebrating the 30th anniversary of this great beer with a 12-pack containing four different versions of it, I was quite simply “psyched.”

Fermentation - The Daily Wine Blog. Home Brewing Blog by BeerSmith - Making Beer at Home. This week we discuss how to keg your home brewed beer with Chris Graham from MoreBeer. 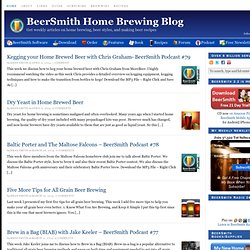 I highly recommend watching the video as this week Chris provides a detailed overview on kegging equipment, kegging techniques and how to make the transition from bottles to kegs! Download the MP3 File – Right Click and Save As […] Dry yeast for home brewing is sometimes maligned and often overlooked. Many years ago when I started home brewing, the quality of dry yeast included with many prepackaged kits was poor. However much has changed, and now home brewers have dry yeasts available to them that are just as good as liquid yeast. This week three members from the Maltose Falcons homebrew club join me to talk about Baltic Porter. Last week I presented my first five tips for all grain beer brewing. The Museum of the American Cocktail. Craft Beer and Homebrewing Blog. My Vine Spot. The Real Absinthe Blog. 4488: A Ridge Blog. Liquor Reviews, Spirit Reviews, Cocktail Recipes and Drinking News.

A Mountain of Crushed Ice. Community Beer Works. This Friday is the first of a new month, and that means it’s time for The Session, the monthly gathering of beer bloggers around a common topic. This month’s comes to us courtesy of Tale of the Ale, and is “Local Brewery History”: In Session 87, I want you to give your readers a history lesson about a local brewery. That’s a physical brewery and not brewing company by the way. The brewery doesn’t need to still exist today, perhaps you had a local brewery that closed down before you were even born. Or you could pick one that has been producing beer on the same site for centuries.Stipulations? At first I was worried I’d have to recuse myself this month: history of a local brewery? Besides: Buffalo is absolutely rich in brewing history. But we’re all new jacks. 1986? Chad'z Beer Reviews. Spreading the messages of craft beer one palate at a time. Wine Peeps: A Wine Blog. Red, White, and Brew. I Love Beer.

The Reverse Wine Snob. Ramblings of a Beer Guy. Because Another Wine, Food, Beer and Travel Blog would have been way too %#&@ing long! Drinks are on me!