Twine - Listen to your world, talk to the Internet 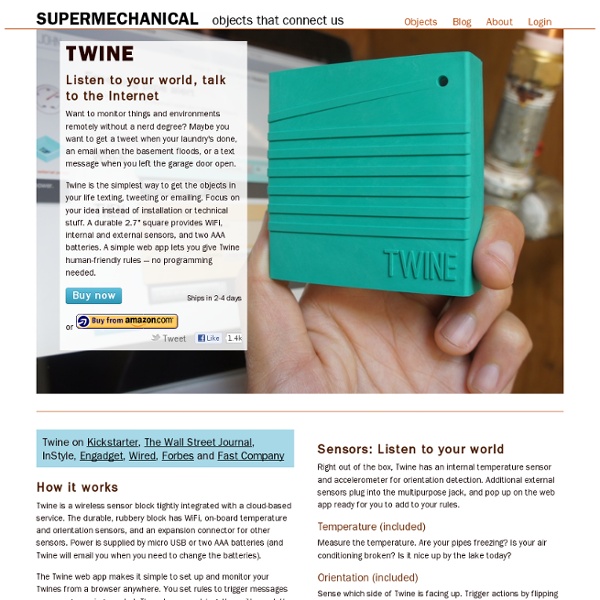 Test Drive Open Source GIS Software There are two options for test driving open source GIS software without having to individually download and install applications on your computer: OSGeo-Live and Portable GIS. OSGeo-Live 6.0 OSGeo-Live 6.0 offers bootable DVD and thumb drive options for testing driving a range of Open Source GIS without having to install anything on your computer. Once configured, the bootable DVD or thumb drive is loaded with almost 50 open source GIS applications covering free software for crisis management, GIS desktop software, web mapping, database management for GIS data, spatial tools, geospatial libraries, and installers for Windows and Mac machines. OSGeo has a full list of the open source GIS applications it makes available on the DVD with links to information about each application. To get started, download the appropriate ISO image of the Xubuntu based bootable DVD. Once the bootable DVD or thumb drive has been setup, reboot your machine with the DVD or thumb drive inserted. Portable GIS

Air Quality Egg Scanadu's Medical Tricorder Will Measure Your Vital Signs In Seconds It was less than a year ago that we first wrote about Scanadu's ambitions of building a Star Trek-worthy medical tricorder--a handheld device that can quickly record vital signs and diagnose diseases. At the time, co-founder Misha Chellam estimated that a prototype tricorder would be ready by the end of 2012. This week, the NASA-Ames Research Center-based startup, announced that it will have a prototype that meets that deadline. The Scanadu SCOUT is incredibly easy to use--just raise the handheld device (connected by Bluetooth to a smartphone) to your temple, and wait 10 seconds for it to scan your vital signs, including temperature, ECG, SPO2, heart rate, breathing rate, and pulse transit time (that helps measure blood pressure). The device, which will retail for under $150, was surprisingly difficult to build. Think about it: When you take your blood pressure, it’s usually with a cuff on your arm. "We really want to show people their health stream.

A CEO’s Guide To Social Media In 2012 Fast Company wants you to have your best year yet in 2012; click for more advice and tips on how to work smarter, manage your career, and lead a more meaningful life. As I jogged down Wall Street in New York in October through the barricades, police horses, and thousands of activists, something became clear. The masses had self-organized and social media had added yet another social movement to its résumé. At the same time, something else became clear to me. Much higher than street level, in the boardrooms of America’s largest companies, social media expertise was far from entering the résumés of most C-suites. Why is there confusion inside these glass fortresses around the world? But with 2012 and the New Year upon us, countless strategy and planning sessions are likely on the calendar. “Every department is telling me they own social media so it feels like it has 12 owners. Thinking of social media as a separate effort will lead to failure and you’ll lose a year.

The Changing Goals of Data Visualization The visual representation of data has gone through a number of phases, with its goals switching back and forth between analysis and presentation over time. Many introductions to visualization tend to portray historical examples as all being done for the same purpose. That, I argue in this short, incomplete, and cherry-picked history, is not true. Early to Mid–1800s: Playfair, Nightingale, Snow, Minard The first uses of graphics to represent data, interestingly, were very bare and abstract, and at the same time were mostly tools for communication. Those charts were drawn to communicate, not to analyze. 1920–30s: Neurath In the first thirty years of the 20th century, Otto Neurath designed a visual language, the ISOTYPE, that not only showed numbers in ways that were easy to read, but that also communicated what they meant. Neurath wanted to educate people about the world: ISOTYPE is the acronym for International System of TYpographic Picture Education. 1960–70s: Bertin and Tukey 1980s: Tufte

WeMo WeMo Partnerships New in 2014, we’ve partnered with Jarden Corporation, maker of Crock-Pot®, Mr. Coffee® and more, to bring home automation to your favorite everyday appliances. The WeMo Story WeMo is a family of simple, ingenious products that make life easier, simpler, better. JOIN THE WeMoVEMENT Discover cool ways people are using WeMo. COMBINE WeMo DEVICES WITH SOCIAL MEDIA WeMo can interact with web-based social media and apps through a great service called IFTTT. Sign up for our newsletter or connect with us. Email Sign Up Your selection has been submitted.Thank you. thank you Out in the Open: The Free Tools That Let You Hack Your Whole Life | Wired Enterprise Tessel, a piece of open source hardware that lets anyone hack their home. Photo: Technical Machine Imagine a home speaker system that identifies everyone in the room and plays only the music they wanna hear. Tapping into tiny RFID chips installed on people’s cell phones, this system would pinpoint each person’s Facebook profile, parse their music tastes by way of the streaming music service Spotify, and create a playlist on the fly. And as new people enter the room and others leave it, the system would adjust this playlist accordingly. What you imagine is here today. ‘We wanted to create a platform for building socially connected machines.’ — Tim Ryan The core of their project is a custom-designed circuit board called the Tessel, and they’ve now “open sourced” the board’s designs — made them free for anyone to use — giving people everywhere the power to fashion their own Tessel boards and use it as the basis for whatever new-age contraption they like. The Technical Machine team.

Data Gift Guide Now that we're done giving thanks for all the intangibles like love, friends, family, and drunkenness, it's time to turn our attention to the physical objects we don't have yet. It's the most wonderful time of year! Here are gift ideas for your data geek friends and family. A few of these take a while to make, so be sure to order them now so that you get them in time for Christmas. Nausicaa Distribution Nausicaa Distribution on Etsy started with pillows shaped as statistical distributions, but has expanded their offerings to a wide variety of statistical gifts, including posters, t-shirts, and coffee cozies. Woodcut Maps Choose your location, select your materials, and you get a beautiful woodcut map. Meshu With Meshu, capture the places that are personal to you and make it into jewelry: pendants, cufflinks, and earrings. xkcd Correlation t-shirt As I'm sure you know, xkcd has a line of merchandise. The Signal and the Noise Information Graphics Pop Chart Lab Typographic Maps HistoryShots Arduino

Radar graphs: Avoid them (99.9% of the time) Stephen Few doesn't like radar graphs, and he's not the only one who has written against them. In a recent discussion on Twitter, Jon Peltier said that they are "worse than pies" —ouch! Even Andy Kirk, who is usually as polite as a British gentleman can be, doesn't have nice words about this kind of display. Most of the arguments against radar graphs can be summarized in a couple of sentences from this post by Graham Odds: "Even with a common scale between axes, comparing values across them remains cumbersome and error-prone. I agree on that, something that you may find unsurprising if you have read my book already. One of those cases is mentioned by Stephen Few himself at the end of his article. Época Magazine In these two infographics, neighborhoods (Matt's piece) and Brazilian states (mine) are represented by radii arranged according to their geographical locations. The goal of both displays is to make a point: Votes for each party tend to concentrate in certain regions. 1. 2.

Mapping Current Average Price Per Sqft for Rentals by Zip in San Fran My company, Kwelia, is sitting on mountains of data, so I decided to try my hand at mapping. I have played around with JGR but it’s just too buggy, at least on my mac, so I went looking for other alternatives and found a good write up here. I decided on mapping prices per sqft for apartment rentals by zip codes in the bay area because we are launching our services there shortly. First transforming the data was easy using ddply in the plyr package after I had queried all the right zip codes into a data frame from the database. library("plyr") w=ddply(sanfran, . Then it’s a matter of loading the shape file after downloading it from here. library(maptools) library(RColorBrewer) library(classInt) zip=readShapePoly("bayarea_zipcodes.shp") The ddply will sort the zip codes, so I transformed the zip spatial data into a regular data frame, merged it with “w”, added pricepersqft to an ordered “zip” data frame, and finally subset out zips without data. sanzipsprice

Second Intro to Infographics and Data Visualization MOOC (Update, January 6: We've reached the 5,000 students limit, the course is full, although I may offer it again the next months.) Registration for the second edition of the Introduction to Infographics and Data Visualization massive online course is open. The 6-week workshop begins in January. You can enroll for free through the KC's Massive Online Courses website. has finished, after 5,000 people signed up. To get a sense of the contents of the course and of its dynamic, read the story just published by the Knight Center. Some participants are currently blogging about their experiences in the first edition, which will end in mid-December. Adventures in Data Journalism: 1, 2, 3Global Sociology Blog: 1, 2, 3DataRemixed: 1, 2Visual TidBits: 1, 2, 3, 4Rachel Wright: 1, 2, 3, 4Francis Gagnon: 1, 2, 3 Ideas Illustrated: 1, 2, 3Show the Data: 1, 2

Sheldon's T-Shirts of The Big Bang Theory - Blog - Cool Infographics If you have seen the comedy show The Big Bang Theory, then you know Sheldon…. If you haven’t seen it, go watch it and get back to us. Have you ever noticed his wardrobe? Graphs, Charts and illustrated T-Shirts with correlating sizes to wearing frequency - would there be any other way to visualize Sheldon Cooper’s t-shirt collection from The Big Bang Theory? This is just a fun infographic that uses some data visualization to appeal to fans of the show. The charts actually very well done. Found on Fibers.com Jaspersoft 5.0 Enables Business Intelligence with HTML5 Posted November 14, 2012 By Sean Michael KernerFeedback Data analysis visualization gets a boost in Jaspersoft's updated business intelligence platform release. Open source business intelligence vendor Jaspersoft is updating its commercial platform with a new release. The Jaspersoft 5.0 release goes beyond the new interactivity options the company introduced in the 4.7 release that debuted in July. "We have replaced our charting engine with an HTML5 charting engine," Mike Boyarski, Jaspersoft's director of Product Marketing , told EnterpriseAppsToday. The charting engine can now deliver interactive views of OLAP data, whereas previous versions offered only static views. Beefed up In-Memory Analytics The Jaspersoft 5.0 platform can enable users to connect to multiple data sources at the same time. The new release also improves on the in-memory capabilities of the platform. Boyarski stressed that a terabyte of results is a massive data set that would be triggered from a large data query.