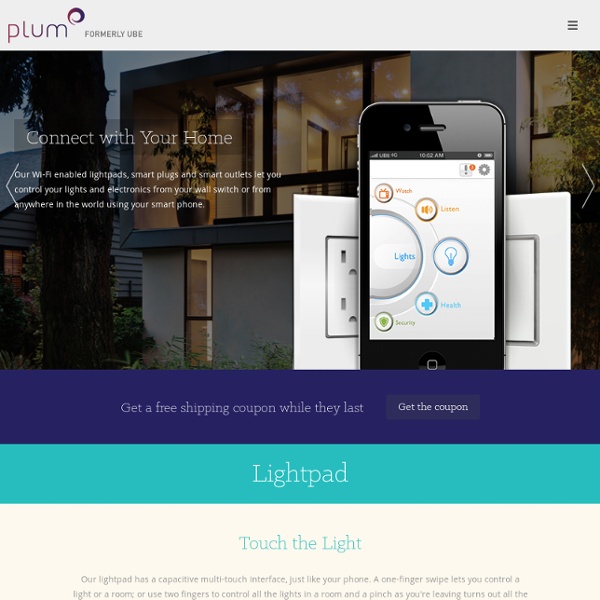 One Per Cent: Smartphone app controls everything in your smart home Hannah Krakauer, reporter (Image: Image Broker/Rex Features) It's the remote control to rule them all. Mobile app company Ube (pronounced "you-be") has developed a single smartphone app designed to control any system in your home that has a wireless connection. That includes media boxes like Apple TV and Tivo, smart TVs, thermostats, garage door openers and anything else that is connected to the internet. For electronics without built-in smarts, Ube makes smart plugs fitted with microprocessors that can be plugged into standard outlets, as well as a multi-touch light switch dimmer. Most smart home technologies are highly proprietary, meaning they need to be customised for each device by a professional. The Ube app can give you information about what temperature the thermostat is currently set to or what channel the TV is on. Ube made a big splash at DEMO, winning the People's Choice Award, and it is poised to start a Kickstarter campaign in the coming weeks.

Control This LED Light Bulb From a Smartphone SmartLabs Technology company Insteon has figured out how to get us out of the worst predicament ever — lying comfortably in bed, on the edge of sleep and realizing the light is still on. Insteon's first dimmable app-controlled light bulb lets home dwellers turn lights on and off from a smartphone app. The bulb works instantly once it's screwed into any light fixture. The remote control system's built right into the bulb's hardware. The energy-efficient LED light replaces and shines brightly like a 60W-100W incandescent bulb. The light can be turned on and off with a lamp's native light switch or remotely by connecting it to the company's SmartLinc Hub. The Insteon LED bulb with the SmartLinc Hub, costs $29.99 and will be available here. This is one step in the direction of future home automation.

home automation for a newbie Zigbee vs Zwave vs hardwired I just got back from CES where I had a chance to speak with both the ZigBee Alliance and the Z-Wave Alliance. The two technologies have almost nothing in common although they are both being used for home automation. Z-Wave is here today and I think they have something like 300+ devices, if memory serves me correctly. That is good, but I will caution you that Z-wave is a proprietary protocol with only one company making the chips. ZigBee is completely different, uses standards, many companies are making chips and products, but like a big truck picking up steam, it takes a long time to get going. I think, if memory serves me, they are reporting 145 products. Which Z-Wave is very focused, home automation, ZigBee is very wide, with applications from smart meters, and lighting control to security, healthcare, even as a replacement for IR in remote controls with the RF4CE standard. As always, if you are building a system TODAY you can't worry about all that.

Getting Started with Arduino Kit V3.0 Getting Started with Arduino Kit v3.0 has everything you need to get started with Arduino, the open-source electronics prototyping platform that's taken the design and hobbyist world by storm. Using the included components, along with our best-selling Getting Started with Arduino, 2nd Edition (sold separately), you'll be able to start building electronics projects that can sense and react to the physical world. Within seconds of opening the box, you can connect Arduino to your computer using a USB cable (both the cable and Arduino are included) and start playing. With the free software available from the Arduino web site, you can start writing simple programs (called "sketches" in Arduino) and move on up to more complex examples. Arduino is a tool for making computers that can sense and control more of the physical world than your desktop computer.